Aboriginal and Torres Strait Islander readers should be aware that this review contains images or names of people who have since passed away.

New York’s Metropolitan Museum of Art is known for its large-scale, ‘blockbuster’ exhibitions. These are usually impressive, often enlightening. But sometimes it can be even more rewarding (and less exhausting) to visit a show on a much smaller scale. Such is the case at the moment at The Met, where six paintings by modern and contemporary Indigenous Australian artists are displayed in On Country: Australian Aboriginal art from the Kaplan–Levi Gift. Installed in a room with four large windows overlooking Central Park – a deliberate choice by the curator, Maia Nuku – these magnificent works reference a very different landscape from the one visible through the glass. Yet the exhibition’s location skilfully acknowledges the cultural meaning of place that its paintings vitally express.

The works were a gift to the museum from an American couple, Margaret Levi and Robert Kaplan. After many visits to Australia and time spent living there (Levi, a Political Science scholar, was the Chair in Politics at the University of Sydney’s US Studies Centre from 2009 to 2013), the couple have amassed a considerable collection of Australian Aboriginal artworks. Their desire for greater awareness of this artistic sphere has led to collaborations with leading American museums, including the donation to The Met of eight paintings, six of which appear in On Country. Until now the venerable institution held only one work by a modern Australian Aboriginal artist, Anatjari Tjakamarra, which it acquired in 1989, so this is a key development in expanding appreciation for modern and contemporary Indigenous Australian art in the US.

On entering the exhibition space, located in the museum’s Modern and Contemporary wing, the viewer is immediately struck by the scale and visual power of the six paintings – two by the acclaimed Utopia artist, Kathleen Petyarre (b. Utopia, c.1940), one by her granddaughter Abie Loy Kemarre (b. Utopia, c.1972), and one each by Doreen Reid Nakamarra (b. Warburton, c.1955–2009), Dorothy Napangardi (b. Yuendumu, c.1950–2013), and Gunybi Ganambarr (b. Yirrkala, 1973). During one of my visits to the exhibition, Ms Nuku informed me that it was jointly organised by the departments of Modern and Contemporary Art, and of the Arts of Africa, Oceania, and the Americas, where she is an Associate Curator. While it was important for these acquisitions to be placed within the context of other international modern and contemporary artworks, she also noted her intention to clarify their continuing tie to a centuries-old tradition. The formal abstractions of Australian Aboriginal paintings have led to comparisons with Minimalism and Abstract Expressionism, and while this formal commonality may aid accessibility to the works, On Country emphasises that these compositions tell a different kind of story. To this end, the display of three late-nineteenth to mid-twentieth-century Indigenous pearl shell artefacts provide a – relatively recent – visual reference, and insightful wall panels locate the paintings historically and aesthetically, interpreting the paintings as visual mappings of sacred Aboriginal sites, or ‘Country’. 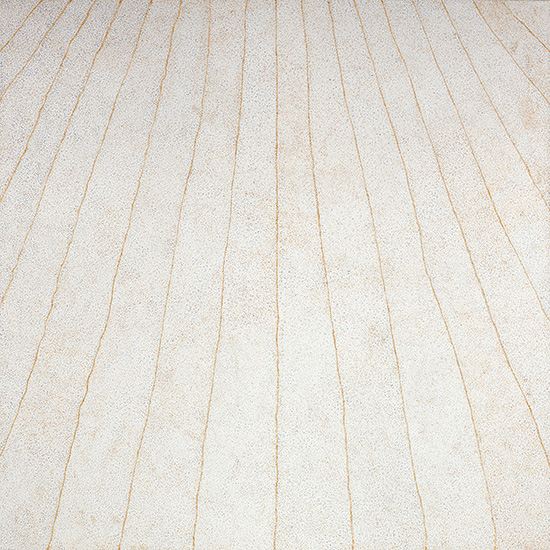 A striking example of this is Kathleen Petyarre’s Mountain Devil Lizard Dreaming – Sandhills Country (After Hailstorm) (2000). This depicts the creation tale, or Dreaming, of Petyarre’s Ancestor Being, Arnkerrth, the Mountain Devil Lizard, through the careful sprinkling of gold and blue dots on a large field of white. While this evokes the vast landscape’s multitude of sand grains, additional clustering of gold dots into a series of parallel lines, stretching from one side of the composition to another, captures Arnkerrth’s tireless journey beyond the boundaries of the canvas. In contrast to this focus on expansiveness, Abie Loy Kemarre chooses a much smaller nature motif to record the sacredness of Country. In Bush Hen Dreaming – Bush Leaves (2003), Kemarre painstakingly repeats the image of a leaf in hues of red, orange, purple, and brown. These colour contrasts, and the pattern created by the hundreds of overlapping forms, call to mind both the leaves for which the bush hen forages and the flutter of its own feathers. It also creates the astonishing illusory effect that parts of the composition move in front of the beholder’s eyes. While many artworks in the history of art have a sense of internal movement, this is the first time that I remember blinking my eyes to check whether a canvas was straight, or whether sections bulged towards me or, indeed, moved. The sensation is what Australian Aboriginals describe as bir’yun, a term meaning shimmer, and it is a prized formal outcome, for it signifies the Everywhen; that the ancient story of the painting is still alive in the present.

Using a visual language of abstract patterning on large-scale supports, this potent effect is mastered by each of the show’s other artists. In Marrapinti (2008), Doreen Reid Nakamarra, the influential Papunya Tula painter, combines dotted horizontal and vertical lines to capture both the mesmerising movement of women walking to the sacred rock hole, Marrapinti, and of the landscape’s shifting sands; while the deep red and white dots of Dorothy Napangardi’s Karntakurlangu Jukurrpa (2002) create a startlingly complex pattern evoking the dynamic force of her ancestral Country. For the north-east Arnhem Land artist, Gunybi Ganambarr, the exchange of bark as painting surface – a centuries-old Aboriginal custom – for that of laminate in Buyku (2011) is an incisive political and cultural comment. While Ganambarr adheres to his community’s laws concerning art making by using a found object, the use of laminate focuses attention on the impact such industrial materials have had on traditional Indigenous land. Nonetheless, Ganambarr asserts the ongoing power of that land through an accumulative pattern of geometric shapes formed from incisions and earth pigments, creating a hypnotising image of Country. 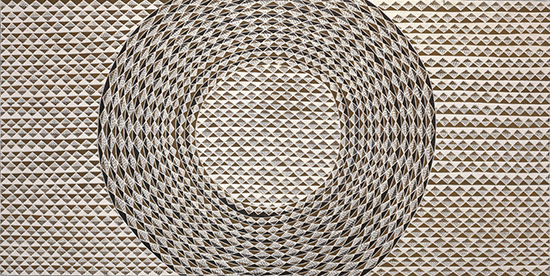 Not being an Indigenous Australian, I don’t pretend to fully understand, or to be able to access the sacred knowledge embodied within, the works of On Country. But the effect of the paintings’ skilfully rendered abstract patterning is such that they still powerfully convey the dynamic strength and cultural impact of an elemental natural landscape, even to the non-initiated. When I visited The Met exhibition, I happened to be reading Henry Beston’s classic book of nature writing, The Outermost House (1928). In Beston’s account of the year he lived alone in a small, isolated house on a Cape Cod beach, I came across, in one of those odd providential moments, a quote that goes some way to articulating what these works communicate, and what those who live close to nature seem to comprehend:

Dwelling thus upon the dunes, I lived in the midst of an abundance of natural life which manifested itself every hour of the day, and from being thus surrounded, thus enclosed within a great whirl of what one may call the life force, I felt that I drew a secret and sustaining energy. There were times, on the threshold of spring, when the force seemed as real as heat from the sun ... I think that those who have lived in nature, and tried to open their doors rather than close them on her energies, will understand well enough what I mean. 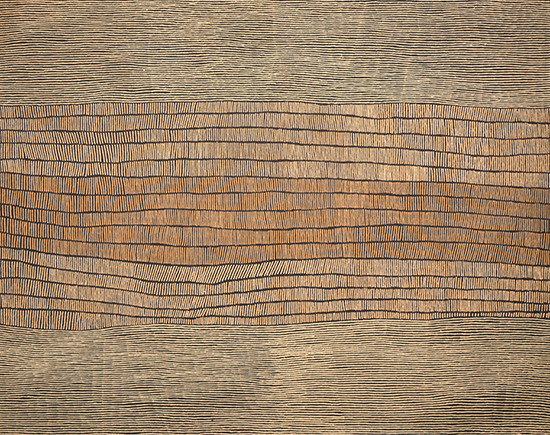 At a time when those in power deny climate change, or seek to eradicate environmental protections, this small delight of an exhibition should be required viewing. Studying these paintings with the sun streaming through The Met’s windows, this elemental force vigorously confronts the beholder. Ironically, in the middle of New York City, these magnificent works bring us a little closer to the natural world.

On Country: Australian Aboriginal Art from the Kaplan-Levi Gift continues at The Metropolitan Museum of Art in New York until 17 December 2017.

Sally Grant is a freelance arts and culture writer based in New York. Born and raised in Scotland, a working holiday visa first brought her to Australia. She subsequently completed her undergraduate degree and PhD in Art History and Italian Studies at the University of Sydney. She is an Honorary Research Associate of the Australasian Centre for Italian Studies, where her scholarly research focuses on the art and experience of eighteenth-century Venice and the Veneto villa.

Sally Grant is a freelance arts and culture writer based in New York. Born and raised in Scotland, a working holiday visa first brought her to Australia. She subsequently completed her undergraduate degree and PhD in Art History and Italian Studies at the University of Sydney. She is an Honorary Research Associate of the Australasian Centre for Italian Studies, where her scholarly research focuses on the art and experience of eighteenth-century Venice and the Veneto villa.