The Rape of Lucretia is the most problematic of Benjamin Britten’s operas. Recent productions of Gloriana, the opera Britten wrote to celebrate Queen Elizabeth’s coronation, have proved that its notoriously unsuccessful première in 1953 had more to do with an uncomprehending audience than with the piece itself. But the problems with Lucretia (first performed on 12 July 1946, at Glyndebourne) are inherent in the opera.

In spite of its ultimate enormous success, Britten’s opera Peter Grimes (1945) had been rehearsed in an atmosphere of tension and hostility. A vocal section of the Sadlers Wells Company made no effort to hide their dislike of Britten’s ‘modern’ music, homosexuality, and conscientious objection, to the extent that the baritone singing the leading role of Balstrode suddenly quit weeks before the opening. In these circumstances it was obvious that Britten would have to find another venue for his next opera. It made practical sense to write a smaller scale work with a more compact orchestra, but Britten was already leaning in that direction anyway.

For its subject, the director Eric Crozier suggested André Obey’s play Le Viol de Lucrèce. Obey presents the often-told story of Lucretia, the virtuous wife of the Roman general Collatinus, whose chastity is considered a challenge by the corrupt prince Tarquinius, son of the Etruscan ruler of Rome. Taking advantage of Collatinus’s absence in battle, Tarquinius rides to Rome, demands lodging with Lucretia, and rapes her. The distraught Lucretia summons her husband, tells him what occurred, and kills herself. Obey tells this story straightforwardly, but adds a male and female narrator who comment on the action.

Britten and his librettist, Ronald Duncan, kept the narrators but decided to make them early Christians. According to Duncan, Britten told him: ‘I see why you insisted on making them Christians. It gives them a definite point of view from which they can objectify the pagan tragedy.’ But in fact Christian ideas of sin and redemption have little to do with the Roman story, and superbly set though they are, the hymn to the Virgin Mary that follows the rape and the panegyric to Christ which ends the opera can come across as sanctimonious platitudes. As the critic Cecil Gray, writing of the first performance in The Observer, put it: “For the most part the work is powerful and effective, but there are moments when it is difficult to reconcile the simple and brutal story of ancient Rome with the superstructure of sententious neo-catholic moralizing imparted by the chorus.’

Kip Williams’s approach to this uneasy amalgam of sexual brutality and Christian pontification is drastic to say the least. Possibly influenced by his recent superb production of Caryl Churchill’s Cloud Nine, in which several key characters are cross-gender cast, he has decided to switch the genders of all the characters in the opera except for the chorus. While this can work in straight theatre – actors can raise and lower the pitch of their voices – it is more challenging in opera where the vocal lines are set. Accordingly, in the first scene set in the Roman camp, the women mime the roles of Tarquinius, Collatinus, and their companion Brutus while the men sing them. In the second, all-female scene set in Lucretia’s house, the roles are reversed. Williams’s ingenious staging avoids the obvious pitfalls inherent in the concept so that even when performers are singing one role and performing another, we are in no doubt as to what is occurring at that moment. 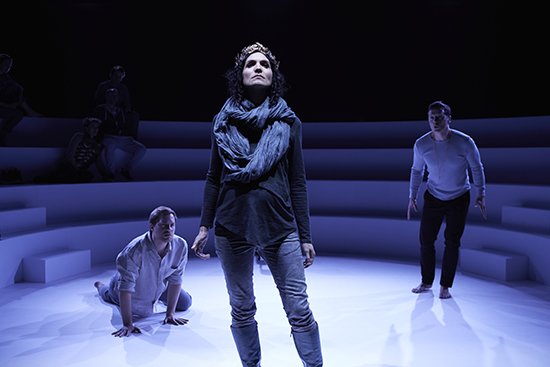 Nathan Lay, Jessica O'Donoghue, and Andrew Goodwin in The Rape of Lucretia (photograph by Zan Wimberley)

The cross-gender casting forces the audience, as it did in Churchill’s play, to contemplate the way we are still to a certain extent locked into iron-clad concepts of what constitutes male and female roles in society, but it comes at a price. Separated from their voices, the performers have no real opportunity to develop their characters. For example, this does not do Britten and Duncan’s notion of Tarquinius justice. Although the man’s actions are undoubtedly evil, as a character he should come across as complex. There should be something seductive, almost vulnerable about him. As Tarquinius stalks Lucretia, the Male Chorus comments, ‘The pity is that sin has so much grace / It moves like virtue’, and just prior to the rape he is given what is arguably the most lyrical aria in the opera. But Jessica O’Donoghue has been directed to play him like a silent movie villain. As the opera progresses, the singers interact more with their characters and the staging of the rape works well, but it is when Anna Dowsley as Lucretia and Jeremy Kleeman as Collatinus are allowed to both sing and act their roles that the dramatic temperature rises spectacularly.

Williams triumphantly overcomes the problems of the final chorus. In Duncan’s not entirely reliable self-published memoir, Working with Britten (1981), he informs us that the opera was originally planned to end with Lucretia’s death but that Britten requested the extra chorus for musical reasons, and there is no doubt that musically it makes an overwhelming conclusion. In Williams’s staging. the plainly dressed Female Chorus removes her cross and asks: ‘Is it all? Is all this suffering and pain, / Is this in vain?’ Meanwhile, the Male Chorus, now dressed in ecclesiastical splendor, intones: ‘Jesus Christ, Saviour. He is all! He is all!’ Both Lucretia’s and Christ’s stories are now in the hands of men. As Lucretia and the Female Chorus gaze at each other across the stage and the centuries in complete understanding, the lights dim and the opera ends.

The entire cast perform with complete conviction on David Fleischer’s simple set, reminiscent of the base of a classic Greek theatre, superbly lit by Damien Cooper. Unfair though it is to single anyone out, mention must be made of Andrew Goodwin’s Male Chorus. Acting as master of ceremonies, he moves the action along and his superb diction survives even the fiendishly difficult Ride to Rome narration. 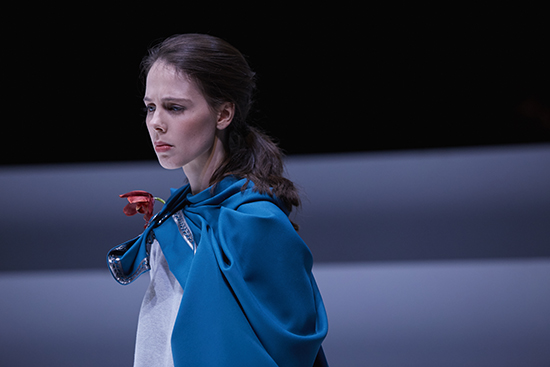 Anna Dowsley in The Rape of Lucretia (photograph by Zan Wimberley)

Stravinsky, never one to praise a competitor unduly, on first contemplating the score of Lucretia is supposed to have remarked: ‘The man’s not a composer, he’s a kleptomaniac!’ To which the obvious response would include the words pot, kettle, and black. In fact, the score shows Britten at his peak and in Jack Symonds’s reliable hands it came over with overwhelming force.