It has been almost forty years since Robyn Archer first performed A Star is Torn, her one-woman cabaret honouring the too-short lives of female singers from Bessie Smith to Janis Joplin. Playing for a year on the West End, and spawning both an album (in 1980) and a book (1986), the show substantially made Archer’s reputation overseas, touring widely for four years. Now she has written and directed The Sound of Falling Stars, a sort of male companion piece starring fellow Adelaidean Cameron Goodall, who was born the same year A Star is Torn premièred at the Universal Theatre in Fitzroy.

Backed by George Butrumlis on accordion and Enio Pozzebon on keyboard, Goodall – who also accompanies himself on various acoustic and electric guitars – embodies thirty-one singers in the course of the show’s seventy minutes. It is a much more generous selection of subjects than Archer’s – about three times as many – but then, four decades have passed since, the death toll has risen, and men are supposedly bigger risk takers than women. In any case, the emphasis is the same – those who died young, and mostly troubled souls who exemplify that signature paradigm of rock and roll, here making its way into the mouth of Nirvana’s Kurt Cobain by way of his 1994 suicide note: ‘It’s better to burn out than to fade away.’

The presentation of stars is more or less chronological, though the show opens, and occasionally returns to, the figure of Sid Vicious, here a sort of nihilistic chorus. The Sex Pistols bass player and vocalist (barely competent in either role) died of an overdose at the age of twenty-one in 1979 after having stabbed girlfriend Nancy Spungen to death the previous year. ‘Love is for people preparing to die,’ Goodall sneers in his best cockney. Later, he will peel open his crisp white shirt – throughout, Goodall wears boots and a black suit, dressing it up or down with a popped collar or buttoned waist, depending on his subject – and scrawl the circle-A anarchist symbol on his singlet with a marker pen.

Part one of the recording of A Star is Torn, performed by Robyn Archer (YouTube)

Vicious’s mother, we are told, gave Sid the drugs that killed him, one of the show’s many indications that Archer is fascinated by the relationship these musicians had with their parents. Protest singer Phil Ochs shared his dad’s bipolarity. Jim Morrison, The Doors frontman, dead at twenty-seven, had a military man for a father. Jeff Buckley ‘hardly knew his dad at all’. Marvin Gaye’s murdered him. When we get to John Lennon, it’s not ‘Imagine’ we hear but ‘Mother’ (1970) – ‘Mama don’t go, daddy come home’ – the singer’s primal therapy-influenced lament for both his parents, father gone and mother dead by the time Lennon was seventeen. Not that it’s all bad. Elsewhere, we learn that Nick Drake’s mother, a poet, sang to him at night. It is not hard to hear her lyrical sensibility in Drake’s songwriting or delicate, plaintive timbre – represented here in a lovely version of the forlorn ‘Way to Blue’ (1969). The vexed correlation between mental anguish and creativity forms another thread through many of these stories. Depression and anomie abound. ‘I’d like to be without the pain,’ says Cobain, ‘but maybe without it I wouldn’t be able to write my songs.’

Cobain’s close-mouthed Seattle drawl, as well as Drake’s ‘creamy English charm’ (to borrow Evelyn Waugh’s phrase), are superbly rendered by Goodall. His range and versatility, spoken and sung, often astonishes. (Only Sam Cooke is really beyond him, but Cooke is really beyond everyone.) It is, after all, a long line between Elvis and Cobain, between the tragic accidents that claimed the lives of so many of the early rock and rollers – Buddy Holly, Ritchie Valens, and The Big Bopper in the one plane crash – and the tortured interiority of Ian Curtis and Elliott Smith, all of whom are touched on here.

Impressive too is Goodall’s economy of expression. Both Morrison – ‘true inheritor of the smoulderers’ in the adoring estimation of one of the show’s lesser-known figures, bisexual actor Sal Mineo – and INXS frontman Michael Hutchence are conjured with little more than a flick of hair and a casually dialled up sensuality. Goodall has insisted in interviews that these are not impersonations; more accurately, they are sketches, hung on recognisable characteristics – Holly’s hiccupping vocal style, Lennon’s sneer – that, while sometimes hewing close to stereotype, are persuasive and often affecting. 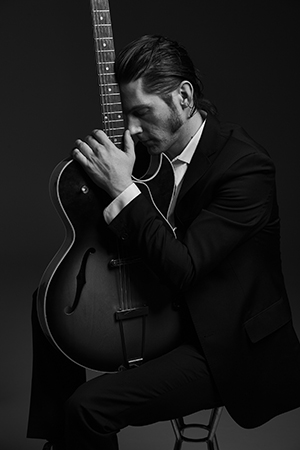 Goodall is well served by the songs’ canny arrangements, each realised with skill and fitly rock and roll gusto by Butrumlis and Pozzebon. Geoff Cobham’s lighting, utilising jagged reflector panels suspended overhead, is evocative, although Tony Harding’s set is not altogether pleasing. The worn armchair and stage door, flanked respectively by bottles of whisky and vodka, are fair enough but the rationale for a backdrop of construction site-style fencing, adorned with vaguely 1950s star-shaped cut-outs, is hard to guess at.

Archer’s astute script and direction, shot through with a very Australian humour that often undercuts rather than endorses the mythology of the romantically doomed musician, encourages us to see the connections between these falling stars. Cobain and wife Courtney Love, we are told, used to check into hotels under the names Sid and Nancy. Jeff Buckley – who drowned in an accident in 1997 with no drugs or alcohol in his system, and whose musician father died from an overdose at the age of twenty-eight – wonders at the seeming fatalism of it all. ‘Is it written?’ he asks.

The final word is Cobain’s. ‘Entertain us,’ Goodall sings over and over again, the familiar, anguished refrain from ‘Smells Like Teen Spirit’ (1991), as the names and dates of the show’s stars are projected onto the back of the stage. It strikes an intriguing final note – neither celebratory nor elegiac in the vein of the rest of the show, but simply exhausted. There is a sense in which we, the audience, are made to feel complicit in these tragic stories through our insatiable desire to be entertained at any cost.

The Sound of Falling Stars is a worthy successor to A Star is Torn. It deserves as long and illustrious a life.

The Sound of Falling Stars, written and directed by Robyn Archer, was performed at the Adelaide Cabaret Festival from 21–22 June, 2017. Performance attended 21 June.