This is Macbeth reimagined as a supernatural-themed action movie for the stage, a high-speed entertainment with explosions and gunplay and plenty of special effects. Macbeth and his fellow Scots scamper about in fatigues, flak jackets, and modern full-dress uniforms, accompanied by relentless blaring music. Battles are waged in the foyers of derelict office towers. Prisoners are tortured according to the most contemporary methods. The castle of the unworthy Thane resembles a luxurious bunker, the natural lair of a charismatic villain.

What better stage vehicle for Jai Courtney, the star of such Hollywood explosion compilations as Suicide Squad (2016) and A Good Day to Die Hard (2013)? And, in fact, Courtney is a pretty compelling Macbeth. A real Thug of Cawdor – in his muscle tee, as whole as the marble, founded as the rock, as broad and general as the casing air – he crashes through the part like a scowling cannonball, or some other more annihilating munition. He gets better, more energetic, the further Macbeth is stepped in blood: the more perfect Macbeth’s evil, the more natural Courtney seems, the more fluent and expressive and self-possessed.

Although this production by director Simon Phillips is often pretty cheesy, and sometimes exasperating, it is not without its flashes of exhilaration and even poignancy. Immediately after Lady Macbeth has ushered out the guests in the ‘ghost of Banquo’ scene, Macbeth slumps at the table like a man who has been relieved of a great burden. Perhaps the last vestige of conscience? At this moment he looks relaxed. As he absent-mindedly plays with a lighted candle, he muses that, yes, blood will have blood. It is an image full of intense but understated menace.

Geraldine Hakewill’s Lady Macbeth is at first full of vivacity and acid intensity, and gives her performance a devastating vérité touch as she descends into madness. When we first see Macbeth’s wife, she is standing downstage in a silky scarlet jumpsuit, spot lit against a murky background. She looks like a luminous drop of blood hanging over the void. But as the bodies pile up the lustre wanes. It is a fine performance, subdued but affecting all the way through.

Esther Marie Haye's costumes are rich and suggestive, and the sets by Shaun Gurton are lavish. Simon Phillips makes extensive use of the revolve. The feasting of Duncan in Macbeth’s castle is particularly spectacular. Phillips uses a façade to give the stage the look of letterboxed widescreen cinema, while behind the façade the palatial dining room extends in all directions. The narrowing of our view of the stage does much to suggest that sense of cosmic malice pressing down on the state. 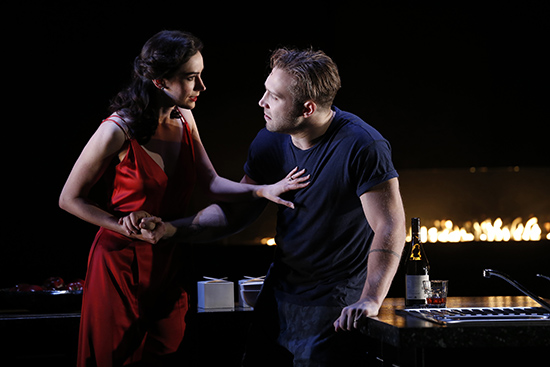 This is an extravagant production, with many novelties and what Eric Bentley would have called bright ideas. In the early scenes, there are flames everywhere: there is a wrecked car that is still burning, an enormous gas heater, and tables covered with branched candelabras. You can feel the heat coming off the stage. This is not so much a production of blood and gore as of fire and gloom and inflicted torments, as though Scotland were a transformed hellscape.

The play opens with the three witches (Jane Montgomery Griffiths, Shareena Clanton, and Kamil Ellis) sitting at a dilapidated bus stop, speaking in a kind of affectless drone. In this production, the witches are like supernatural secret agents, spirits who feed on war and disorder and are the direct cause of much of death and suffering. They are almost always on stage, in disguise as servants and soldiers, as though attracted to the smell of blood. They quietly plant bombs, finish off injured men, and lurk malevolently in passageways. It is a rather Stephen King-like combination of magic and horror.

In an inspired doubling of parts, Montgomery Griffiths also plays the Nurse who attends the doomed queen in her final hours. There is a moment when she looks into an invisible bathroom mirror on the fourth wall and runs a hand through her hair. It is almost as if we see both Witch and Nurse in one, like the Skriker admiring a new shape.

Robert Menzies is sympathetic as both King Duncan and the Porter, and he also plays the Doctor who tends to Lady Macbeth. It is another fascinating piece of doubling. When the queen is being ushered back to bed, she suddenly starts and seems almost to recognise the murdered king underneath the Doctor – and also, incidentally, her own father. Among the others, Kevin Hofbauer is an effective Banquo, Rodney Afif is very good as Ross, and the young Ellis is most impressive as the third witch and Fleance. 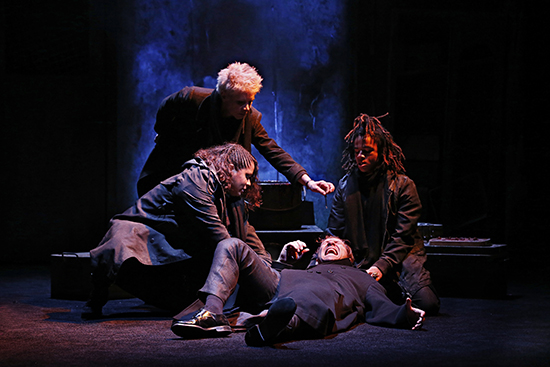 It is worth dwelling on the positives in this production, but overall it feels a bit giddy, with so many gimmicks and obtrusive effects. Simon Phillips tries too hard to replicate the experience of a big-screen blockbuster for my taste. Consider the final scene. Phillips has cut the death of Young Siward but gives us instead a seemingly never-ending brawl between Macbeth and Macduff, played by Dan Spielman. Hand-to-hand combat works fine on film, but not so much on stage, especially not if drawn out to great length. Macbeth is Shakespeare's most insightful and mature treatment of the problem of evil, and it is a shame to finish on a note of bathos.