Australian director Cate Shortland has made three feature films about young women who find themselves out of their depths. Her first, Somersault (2004), set in wintry Jindabyne, featured Abbie Cornish in an early and memorable role as a troubled teenage runaway. Lore (2012) was adapted from Rachel Seiffert’s Booker-shortlisted novel The Dark Room; its titular character, the daughter of Nazis, must lead her younger siblings on a difficult journey across Germany during the last days of World War II. Shortland’s new film, Berlin Syndrome, also takes places in Germany, as the title suggests, and is also adapted from a novel. But the setting is contemporary, and the plot concerns Clare (Teresa Palmer), an Australian tourist and photographer, whose chance meeting with a local man has awful consequences.

The sense of threatened, and threatening, submersion that characterises Shortland’s films is as much visual as psychological. She uses a cool, sea-blue palette, and her close-up shots often have a shallow depth of field, so that certain objects loom into focus while the rest are a watery blur. Guileless young women drift through these submarine realms, as if they will take whatever comes their way, though they may struggle, intermittently, to find solid ground. This tilting between acquiescence and self-possession made Somersault, in particular, very moving, but the imbalance of states is greater in Berlin Syndrome, and the naïveté of the main character feels far less credible.

In the opening scenes of the film, we watch Clare, wide-eyed and twenty-something, wander the German capital. She carries a backpack and a camera, like any number of thrifty travellers. She first encounters Andi (Max Riemelt), who looks about the same age as her, on a street corner. He drops some books, offers her some strawberries, and then pulls her in for an overly familiar kiss on both cheeks. I don’t know about you, but after that indecorous gesture I would have set off walking – or possibly running – in the opposite direction. The guy is so obviously a creep that it seems ludicrous that any young woman would stay to talk with him, much less spend a whole day in his company, as Clare does, during which time he also puts his hands around her throat. That still isn’t enough of a warning sign: she drives off with him (he locks the car doors) to a conveniently abandoned Berlin apartment block (‘It’s so quiet here’), where they have sex. The next morning they wake up in each other’s arms. 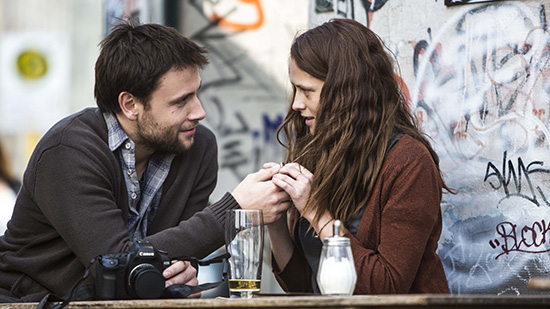 Max Riemelt and Teresa Palmer in Berlin Syndrome (Entertainment One)

None of this is to suggest that what happens next is Clare’s fault, though I do wonder if the film suggests it: that because of her failure to recognise danger, or because of her attraction to it, or both, bad things are inevitable. What happens is that when Andi leaves for work in the morning, Clare discovers that she’s been locked in. The remainder of the film is a slow, relentless grind through her sexual slavery and emotional abasement. There is little explicit violence, but what we see is enough. And we soon discover, along with Clare, that Andi is quite the Bluebeard.

I so deeply disliked this film that I doubt my own feelings; perhaps I misunderstood it. But I hated its steady, unperturbed stylishness, which seemed to belittle the horrific subject matter. Everything – from Clare’s bound and bruised wrists, to afternoon dust motes, to Christmas wrapping paper – is afforded the same kind of fetching close-up. The film never registers Clare’s fear on a formal level; never tries to demonstrate, cinematically, her subjective experience of isolation and abuse. But nor is Shortland brave or cruel enough to implicate her audience in the scenario, as a director like Michael Haneke might have chosen to do. Instead, with the camera taking neither the victim’s nor the torturer’s side, the viewer can be nothing but a helpless bystander, which I found intolerable.

As the film goes on, we learn more about Andi than we do about Clare. Andi’s father, with whom he has a strained relationship, is a lecturer, who talks with his students about the former German Democratic Republic. This echoes some dialogue in the opening scenes, when Andi chides Clare for her interest in photographing the historic architecture of communist Berlin. ‘You photograph disappointment,’ he tells her. If the film is trying to draw an analogy between Clare’s imprisonment and the formerly walled-in city, it doesn’t succeed, in part because state repression is not just a scaled-up version of domestic violence. And if Shortland really wanted to investigate any connection between the two circumstances, Berlin Syndrome would have had to deal more thoroughly with the question of surveillance, which was so integral to the manufacture and maintenance of fear inside the GDR. Andi does photograph Clare, but overtly, not covertly, posing her in ways that resemble a certain style of grungy, déshabillé fashion shoot. And he shows an almost total lack of interest in what she does – which isn’t much – when he is not there to terrorise her directly. There are long stretches in which Palmer is left on her own, with little to do as a performer other than to look scared, and sometimes bored. 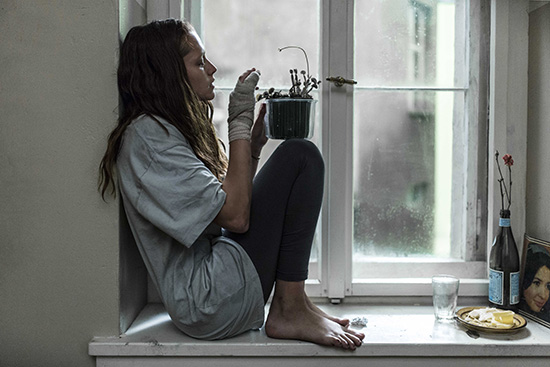 Of course, Clare escapes in the end, which is hardly a spoiler, because it’s as much a given as was her initial kidnap. I was relieved, but the feeling was generic – it was relief at being freed from the relentless inevitability of the plot, rather than sympathy for a character who remains barely sketched in, even by the film’s end. Clare’s punishment for having trusted someone is to have had that trust, and her autonomy, denied her, and what is implied in the film’s clumsy machinations is a conservative understanding of sex and of gender relations, in which a casual sexual encounter will always be, for a woman, potentially ruinous. That moral message is as cramped and depressing as a locked room.

Berlin Syndrome, 116 minutes, directed by Cate Shortland, based on the novel of the same name by Melanie Joosten. Distributed in Australia by Entertainment One. In cinemas from 20 April 2017.