Many wonderful things have been written about this sprawling gem of a play since it was first staged in 1993. Two decades later, it still bamboozles, delights, and moves its audience in its uncompromising search for meaning in love and science. This was a production in genuine homage to one of the great plays of modern times.

First, though, a note of deepest praise for the Sydney Theatre Company, which is currently staging three massive shows of ideas, each with a big cast: Arcadia, The Golden Age, and The Secret River. No other Australian theatre company in recent times has presented such a cavalcade of big writing – in the case of the Australian works, by Louis Nowra (The Golden Age) and originating from Kate Grenville and scripted by Andrew Bovell (The Secret River). With the former (which I saw on 13 February, well into its run), we also have a revival of an Australian classic, first staged in the mid-1980s and, like Arcadia, one of the great plays of its period – hugely ambitious in ideas and wordcraft.

Arcadia captures the intersection between Romanticism and the rise of science in the early 1800s, in particular through the eyes of Thomasina Coverly, a brilliant teenage student and her clever (not brilliant) and handsome tutor, Septimus Hodge. At the magnificent country estate of Sidley Park, idle times are spent in shooting, affairs, and duels, while Thomasina ponders the big questions. Georgia Flood, a wonderful Thomasina, is transformed from precocious student to a young woman of ultimately tragic desire. Ryan Corr in the role of Septimus is both alluring and vulnerable.

The action shifts between 1809 and the 1990s when a contemporary Byron scholar, keen to make his mark in academia, is investigating whether the poet visited Sidley Park and had an affair and resultant duel, which might explain his rapid exile from England.

Despite her youth, Thomasina is absorbed by the theories of physics, in particular whether the great secret of the end of us all is hidden within the emerging knowledge of what came to be identified as chaos theory. Through the device of Thomasina, Stoppard asks whether the quest for love can have any real meaning when the search for truth in science can have only one answer. 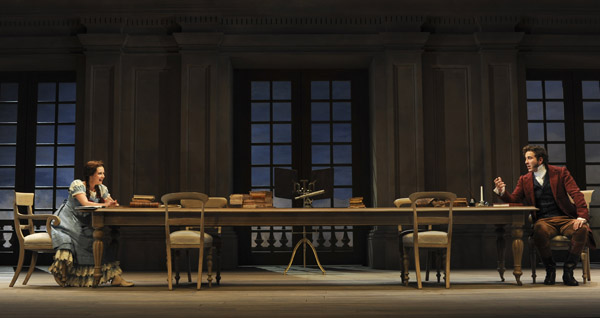 The frippery of the aristocracy is depicted with considerably more fun and affection than is the modern world of academic enquiry and celebrity, which Stoppard debunks. Here, the aptly named Blazey Best as the historical Lady Croom, could hardly have been better. Josh McConville seemed somewhat trapped in the difficult bad-guy part of Bernard Nightingale, the Byron scholar.

As chaos and unrequited love meet at the conclusion of the play, the illusion of time shifting is abandoned altogether and the past and present are played out simultaneously.

The staging of the play is a challenge; it is centred on a large table at the estate. Over nearly three hours, there are hardly any changes in the set, apart from minor props. Otherwise the cast is left to fend for itself in a kind of avalanche of big speeches. These present huge challenges which are only partly overcome in this production. Director Richard Cottrell focuses his efforts on the language and does little to visually embellish the experience.

The exposition of the language is a particular treat (supervised by a voice and text coach Charmian Gradwell, who has a background in the Royal Shakespeare Company). The text is delivered with clarity and relish by the fine ensemble cast.

In typical Stoppard style, two key aspects of the play are much spoken about but do not find their way onto the stage: the mysterious Lord Byron (or 'B', as he is sometimes referred to); and the distant arcadian garden which is described as being in transition from carefully plotted order into its chaotic natural form. 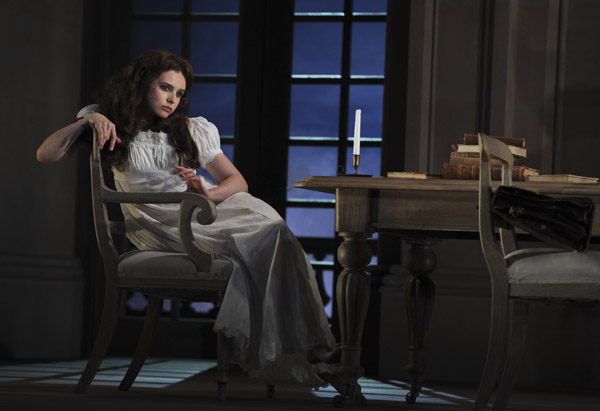 As many have observed of the play, it is one of the great vehicles for wordcraft in modern theatrical writing. It is a long way removed from 'the click and move on' world of 2016. During the scenes of modern academic research and discourse, there is not a computer screen or mobile phone in sight. Much has happened in the world of ideas and communication since the work was first staged.

One of the many messages in this commanding work is that in modern theatre there is an absolute imperative to ensure that wordcraft and big ideas are championed.