'One-hit' operas litter the repertoire. One thinks of the aria 'Ebben? Ne andrò lontana', which every soprano worth her salt has sung in concert and many have recorded. The aria was the thread running through the cult move, Diva (1981), sung in a concert scene in the film by the soprano Wilhelmenia Fernandez, not a particularly well-known singer. The eminently better-known Kiri Te Kanawa sang the same aria on the soundtrack for the Merchant Ivory film A Room with a View (1985). But how many people have heard of, let alone seen, Alfredo Catalani's opera, La Wally (1892), from which the aria comes?

Bizet's early opera The Pearlfishers has been in danger of being included in this list through the ubiquity of the tenor–baritone duet 'Au fond du temple saint', another piece of classical music given enormous currency through a film, in this case Peter Weir's Gallipoli (1981). This duet frequently tops surveys of the best-loved pieces of classical music. But the opera is far from falling into the one-hit category, and is filled with memorable music. However, it cannot be denied that it has been completely overshadowed by Bizet's final opera, Carmen (1875), considered by some as the greatest opera of them all. But The Pearlfishers contains many of the elements that make Carmen such a masterpiece. Like Mozart and Schubert, the early death of Bizet at thirty-six, in 1875, is one of the most tantalising musical 'what ifs'?

Edward Said described the Orient as one of the West's 'deepest and most recurring images of the Other', one that has 'helped to define Europe (or the West) as its contrasting image, idea, personality, experience'. Bizet's opera springs from this fascination with what was perceived as mysterious, exotic, and alluring, part of a fertile vein of European Orientalist music – aspects of the larger artistic engagement with the East. This was particularly prevalent in France during the nineteenth century; there are many operas that tap into this subject matter – even Carmen might be viewed in this light. Gypsy life in Spain was certainly regarded in this way by the French bourgeois. 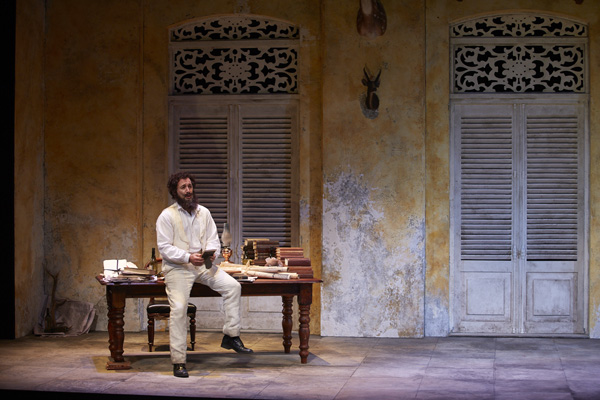 José Carbó as Zurga in The Pearlfishers (photograph by Keith Saunders)

The Pearlfishers was premièred in Paris in 1863 when Bizet was not yet twenty-five, enjoying a respectable eighteen performances in this initial run. This was his sixth stage work, but it received short shrift from the contemporary critics, some accusing Bizet of 'Wagnerism'. One observed: 'There were neither fishermen in the libretto nor pearls in the music.' Many singled out its rather flimsy plot, held together by unlikely coincidence as well as lack of character development. Winton Dean describes them as 'the regulation sopranos, tenors etc., with their faces blacked'. Even the two librettists acknowledged that their work was sub-standard. Eugène Cormon admitted later that if they had known what a fine composer Bizet was, they would have tried harder: 'we would never have given him our white elephant.' The theatre manager Léon Carvalho is supposed to have suggested to Michel Carré, the second librettist, that he burn the libretto. It was later suggested – this is probably apocryphal – that this is why the opera ends with a fire.

Bizet himself, thought little of the opera in later years. He remarked that the opera was 'very much discussed, attacked, defended – a failure in short, honourable and brilliant ... but nevertheless a failure'. Disparagingly, he referred to it as 'The Shrimp Fishers'. The work was not revived during Bizet's lifetime, and although it was staged fairly frequently during the later nineteenth and early twentieth centuries, often in Italian, it only began to enter the repertory during the last forty years or so, when the score was 'cleaned up' from the many accretions and changes that had crept in. The current production at the Metropolitan Opera, hugely acclaimed, is only the second in that company's long history. Australians have had ample opportunities to hear the opera, most recently in the Melbourne Opera's production in 2014.

What cannot be denied is Bizet's ability as a tunesmith, and The Pearlfishers is crammed with melody. The famous duet occurs early in the opera – in many ways it is more typical of a love duet than the standard tenor–baritone duets of the time, suggesting the depth of the two characters' relationship – but Bizet uses its main melody as a form of reminiscence motif, which he brings back at strategic moments when the friendship is challenged. The big tunes keep coming after the duet, with Nadir's beautiful aria 'Je crois entendre encore' near the end of Act One. In the second act, Léïla has a lyric piece, 'Comme autrefois dans la nuit sombre', often compared to Micaela's aria from Carmen. There is a lovely, if conventional, duet for Leïla and Nadir, 'Ton coeur n'a pas comprise le mien', and the act ends with a noble, hymn-like chorus. In fact, the chorus is extremely prominent throughout with some of the most effective music.

But it is perhaps the third act where the most interesting and dramatic music occurs. A large-scale baritone scene depicts the struggle that Zurga is wrestling with in regard to his friendship with Nadir and his love for Léïla. The following duet for Zurga and Léïla might be considered the musical and dramatic highpoint of the score; it is strongly reminiscent of the struggles between Carmen and Don José. The opera ends, appropriately, with a reprise of the 'friendship duet' melody, now sung by Léïla and Nadir as they make their escape, having been released by Zurga. 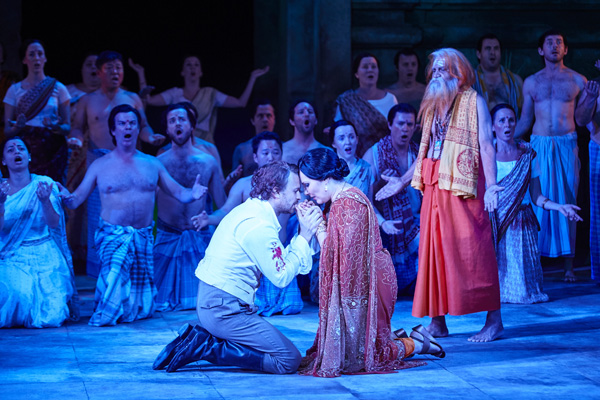 Staging The Pearlfishers presents challenges. There are perhaps two approaches. The first is to accept the shortcomings of the libretto and attempt to portray a realistic nineteenth-century pearling village set in Ceylon; but this runs the danger of appearing culturally patronising. The second is to 'deconstruct' the work from a twentieth-first-century sensibility by questioning the 'problems' that the first approach raises. Opera Australia's new production sets it in a generic oriental setting, roughly located in the late nineteenth century, at the height of colonial expansion. Michael Gow's production suggests the second approach through making the three male characters European, removing them from their Ceylonese village. This approach is immediately problematic. In the first scene, Zurga is elected leader by the villagers, an improbable scenario for a European overseer, highlighting the many historical and cultural inaccuracies that abound in the opera: conflicts often arise between the production and the libretto, and even the music.

Gow justifies his choices, describing this world as full of 'shysters, racketeers, planters, hunters, drunks, dealers in everything that can be sold, all sick with fever and too much sun. In this context, the three male principals started to come to life. And rather than ignore the inconsistencies, I think it's better to face them head on. Delusion and deception are important in this story.' His approach is consistent, and judged from this perspective, it succeeds. The sets and costumes by Robert Kemp are visually arresting, particularly the first scene with its bright oranges and reds set against a glittering blue sea; this provides a versatile and practical playing area.

This is an opera that objectifies and fetishises the voice – the voice of Léïla precipitates the events – and it needs good singers. This it certainly has. As the vocal object, Russian soprano Ekaterina Siurina has a full, warm sound, steely in her more dramatic moments, but pliable and expressive when needed. One might wish for more subtlety and finesse in some of her singing, but she is a singer on an impressive trajectory. As is the Nadir, Slovakian tenor Pavol Breslik. Although slow to start – the B flats in the duet were a little pinched – he revealed a soft-grained, very attractive voice, with his aria a particular highlight, demonstrating his easy access to the head voice, a facility demanded by the role. 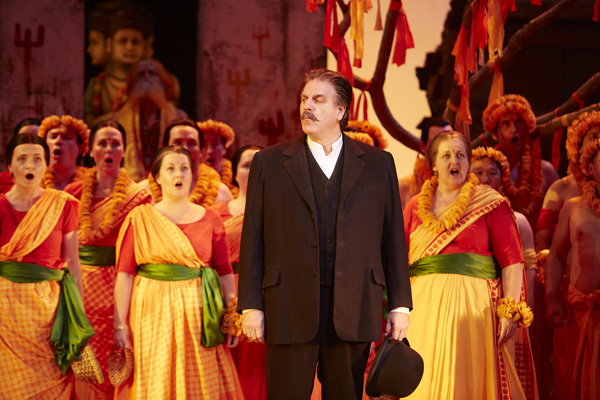 Daniel Sumegi as Nourabad in The Pearlfishers (photograph by Keith Saunders)

José Carbó as Zurga demonstrated all the qualities of a powerful house baritone; he has sung a wide variety of roles for the company with great distinction for many years. He was able to produce a finely focused sound, essential for French baritone repertoire, but also the necessary vocal heft in the more dramatic moments. His third-act aria and duet with Léïla were highlights of the performance. Daniel Sumegi as Nourabad has as much voice as the other three combined, but the role gives him limited opportunity to shine: he is an impressive vocal and physical presence on stage as a brutal European overseer, trafficking in priestesses amongst other commodities. Mention must be made of the chorus. A youthful group, they provided much of the vocal excitement and momentum of the performance, led with great brio and pace by Guillaume Tourniaire. The orchestral playing was expressive, subtle, but forceful when needed.

The Pearlfishers première was preceded by the first performance of The Rabbits on Thursday evening (I reviewed the latter for Arts Update in 2015). Two very different presentations, but providing Sydney audiences with quality productions which bodes well for the 2016 season.

The Pearlfishers, conducted by Guillaume Tourniaire and directed by Michael Gow for Opera Australia. Season runs from 15 January to 12 March at the Sydney Opera House. Performance attended: 15 January 2016.