'Middletown. Population: stable,' says the cop on patrol, addressing the audience. 'The main street is called Main Street. The side streets are named after trees ... Things are fairly predictable. People come, people go. Crying, by the way, in both directions.' Middletown. Muddletown. Everytown. The cop's monologue sets up the premise for this play. For the next few hours we will be immersed in the quotidian angst of Middletown's residents as they pursue lives of quiet desperation.

This is prime Will Eno territory. The American playwright, famously described as 'a Samuel Beckett for the Jon Stewart generation', enjoys skewering middle America with his mordant wit. Middletown, with its motley characters – the cheery librarian, the gloomy odd-job man, the resident alcoholic, the young mother-to-be who has just arrived – harks back to Thornton Wilder's Our Town (1938). Like Wilder, Eno eschews happy endings, preferring to strip away the cosy veneer of suburban life. Instead, he exposes the troubled souls behind the gleaming windows and swept porches in tidy streets. Outwardly, the cop brims with civic pride, but reveals a sinister, violent side when he assaults the harmless drunk for no obvious reason. Mary, the newbie, is expecting a baby but coping alone as her husband is frequently absent. Sometimes the characters disclose their fears in dialogue; sometimes (as in Wilder) they share their shattered personal histories in painful monologues.

In the first half, the script bounces easily from the naturalistic to the absurd, framed with sharply honed truths and bittersweet homilies. 'I get these awful panic attacks,' admits John, the handyman struggling with chronic depression. 'They're how I stay in shape.' Confiding in Mary, he adds. 'I've heard about identity theft. Why don't they take mine?' Meanwhile Mary wishes to join the local library. 'Good for you, dear,' smiles the ever-optimistic librarian, handing her a form. 'I think a lot of people figure, "Why bother? I'm just going to die, anyway."' It is Eno's linguistic agility and trenchant humour that lifts the play from the parochial to the truly universal. 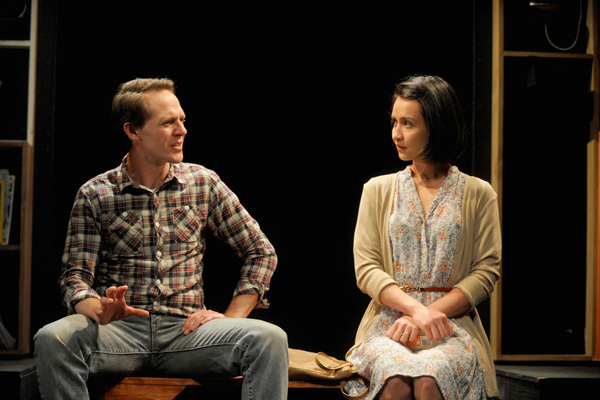 If Middletown had ended here, the play would have been a triumph. However, the themes are teased out in a deeply unsatisfactory second act. It is as if Eno has run out of puff. He introduces the act with a meta-theatrical device, turning his characters into audience members watching the play within the play, discussing Middletown during a fake intermission, commenting on Eno's intent and speculating on the dénouement. Yes, it's funny and clever, but also glib and archly self-conscious, a false note that jars throughout the second half.

In Act Two, we are at the hospital, the crossroads between life and death, where on stage left John is recovering after a botched suicide attempt and on stage right Mary has arrived to give birth. The action shifts between their two hospital beds. Townsfolk visit and depart, the baby is born and John dies.The town drunk, now in rehab, dons a Red Indian costume and performs a war dance for the kids' ward, linking Middletown's past (it was formerly an Indian settlement) with the present. Life goes on. The end. All too pedestrian, predictable, and perplexing, like sitting through a play written by two completely different playwrights. I have often found this with Eno – even in his best-known play, Thom Pain (based on nothing) (2004), the sparkle of his existential questioning fizzles out too soon into gratuitous platitudes. What you get are brilliant flashes in the void. It is a tribute to Eno's talent, however, that those flashes are well worth waiting for. Even at his worst, he's much, much better than most.

'The American playwright, famously described as ''a Samuel Beckett for the Jon Stewart generation'', enjoys skewering middle America with his mordant wit'

This production is Middletown's Australian première and it is a triumph for Red Stitch. Rarely have I seen a more evenly matched ensemble. The cast of six actors switch roles seamlessly and Edwina Samuels, Jordan Fraser-Trumble, Gareth Reeves, James Wardlaw, Christina O'Neill, and Evelyn Krape embody their characters with humour and compassion. I was struck by the wistful quasi-love story between Mary (O'Neill) and John (Reeves) who attempt to connect through half-voiced revelations; by Samuel's versatility (has any actor embodied both an autistic child and a tour guide in the same play?); by Fraser-Trumble's troubled, lonely wino with a philosophical bent; by Wardlow's doubling as good-cop-bad-cop and an earnest but psychologically clueless obstetrician; and finally, by Krape's ebullient physical performance and masterful comic timing, she remains a national treasure. 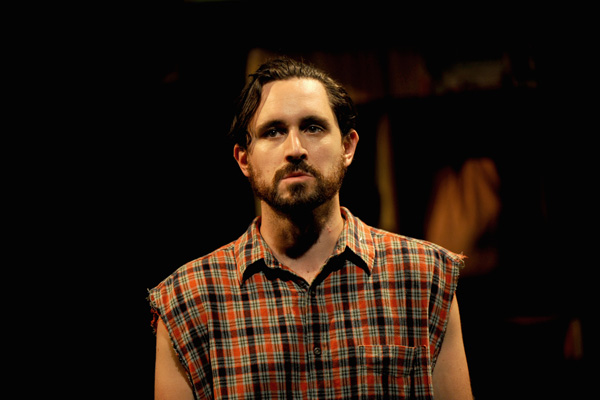 Director Alice Darling, who was Red Stitch's inaugural graduate director in 2014, is clearly one to watch. Emily Collett's set is visually enticing: the stage in Act One is framed by two windows through which the characters peer, comment, live. On the walls are tacked props and parts of the set; they are taken down smartly as needed, then replaced. This is both spatially economical and highly ingenious.

On opening night the play ran for three hours; it could do with some tightening up. But that's a minor point. Middletown cements Red Stitch's role as a company that introduces hitherto unknown and exceptional international writing to Australia and deserves hearty congratulations for this production.

Middletown is written by Will Eno and directed by Alice Darling for Red Stitch. The production continues until 19 December at the Red Stitch Actor's Theatre. Performance attended: 20 November.