) epically traverses the profoundest bays of the human condition. Together, they round out a season inaugurated by Mozart’s Don Giovanni, another staple of the repertoire that has at its heart the promise of divine justice.

Their first performances a mere fifteen years apart – Faust in Paris in 1859, Requiem in Milan in 1874 – the two works are also connected by their inauspicious beginnings. Faust was rejected by the Paris Opéra and kept off stage for a year while Adolphe d’Ennery’s drama, similarly based on Goethe’s tragedy, was playing in the same city. The Requiem, with its unusual hybrid form, its call for female singers, and the perceived rift between its religious themes and dramatic musical expression, did not find immediate favour in Italy. It was not until the 1930s that the work entered the standard choral repertoire. Now, like Faust, it is a fixture, having become a sort of musical shorthand for titanic struggle – floating over New York radios in the wake of September 11, and newly theatricalised by Oper Köln, with nods to Fukushima and Aids.

This Faust, a recreation of David McVicar’s 2004 Convent Garden production, updates things only as far as pre-revolutionary France. As Peter Rose noted in his review for Arts Update, the new conception is wholly successful: articulate, unobtrusive, and often – such as when, during Act II, the stage is transformed into the bacchanalian Cabaret d’Enfer – both inventive and unashamedly entertaining.

Act V’s Walpurgis Night scene, with its series of ballets – a late inclusion that was imposed on Gonoud, and usually left out in contemporary productions – is recast as a nightmarish assault on Faust’s conscience, a surreal, orgiastic spectacle presided over by a sumptuously cross-dressed Mephistopheles. Such manoeuvres are typical of McVicars’s approach: novel but unforced, extravagant and yet entirely congruous with the studied excess of Gonoud’s music (accentuated here by the rare pressing into service of the Festival Theatre pipe organ. with its thunderous forte).

Teddy Tahu Rhodes, a magnificent Mephistopheles, captures McVicar’s conception of the character – more mischievous than malevolent, charming and ever so slightly bored rather than grandiloquent. I can still hear the staccato laugh, delivered in Rhodes’s resonant baritone. 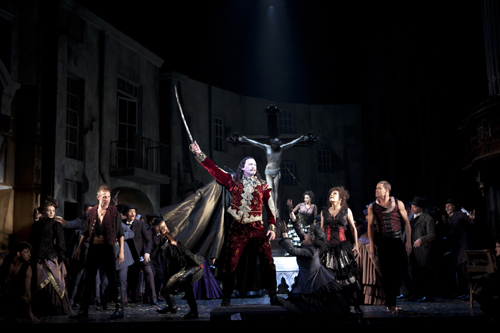 Young tenor James Egglestone, effortlessly transforming from the aged Doctor Faust into the character’s supernaturally endowed alter ego, is similarly impressive; he combines vocal clarity and sympathetic characterisation to pleasing effect. I was particularly impressed by his intense yet supple ‘Salut! Demeure chaste et pure’ (marred only by insecure high notes, illustrated on opening night by an alarming, if brief, lurch into silence).

South Australian-born soprano Kate Ladner, whom Adelaide audiences will recall from a memorable turn as the title character in Gale Edward’s Salome two years ago, is less impressive as Marguerite – the Jewel Song, though technically competent, felt over-embellished – but it is hard to fault her highly expressive duets with Egglestone.

On opening night, Michael Honeyman was left to embody the role of Valentin only, a ‘vocal indisposition’ that led to his miming to Jeremy Tatchell’s fine singing; the only major disappointment – discounting the not-quite-big-enough Festival Centre stage that left Charles Edwards’s stunning sets feeling somewhat hemmed in – of a production the scale and ambition of which are seldom seen in Adelaide.

Requiem, conducted by State Opera SA Artistic Director and CEO, Timothy Sexton, was a similarly epic affair: dramatic, enervating (for performer and audience member alike), and requiring the combined services of the Adelaide Symphony Orchestra, the 51-strong State Opera Chorus, and four impressive soloists: Teresa La Rocca, Elizabeth Campbell, Douglas McNicol, and Diego Torre. To this list we should add percussionist Steven Peterka, whose assaultive yet precise onstage playing contributed so vitally to Requiem’s iconic Dies Irae (Day of Wrath) sections. The whole thing took place against the backdrop of Edward’s primary set for Faust, the centrepiece of which is a gigantic crucifix. 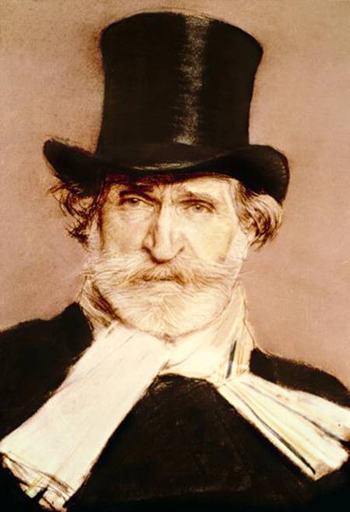 Verdi himself was reputedly an agnostic, but whether one reads Requiem as an appeal to the divine or a humanistic expression of struggle matters little to our reception of it in the concert hall. It is, by turns, transcendent and terrifying, a choral work supercharged with symphonic writing that massages many of the same emotional pressure points as Verdi’s great music-dramas.

It was, here, imbued with all the necessary majesty. As per the composer’s instructions, four additional trumpets were positioned antiphonally in the theatre, the players arrayed throughout the opera boxes that flanked the stage in Faust. The fanfare, swooping in and out before the end of the second movement (the first of the Dies Irae sections), evoked archetypal images of angels calling humanity forth into the next world. It was just one otherworldly moment among many. The Lacrymosa dies illa and Lux aeterna, appeals to Jesus and his saints for rest and mercy, wept and sighed, as they must. Finally, the exquisite Libera me – a plaintiff cry of ‘Deliver me, Lord, from eternal death … when you will come to judge the world by fire’, beautifully judged by soprano Teresa La Roca – shimmered and died away, the world dissolved in ashes.

Verdi wrote the solos for singers well known to him, a fact that shone through in four equally distinctive and virtuosic performances. Particularly fine was Mexican tenor Diego Torre, who was making his company début after recent successes with Opera Australia. He maintained an astonishing robustness and demonstrated an innate understating of the drama of Verdi’s music.

Happily, this understanding also extended to the orchestra under Sexton’s baton – a fulsome, dynamic, powerful display that, while less thoughtful perhaps than, say, Daniel Barenboim’s 2012 recording in Milan, nevertheless delivered the full significance of this mammoth and sublime piece of music.