In a hit-driven commercial climate, creating film franchises makes economic sense. Consumers who enjoyed the first The Best Exotic Marigold Hotel are likely to purchase a ticket to the sequel. Those who have committed more than eleven hours’ viewing to the first six films in The Fast and the Furious series will probably invest in the seventh. Film series encourage a devoted audience. With their extended film-worlds, continuing narratives, and attendant mythologies, film franchises generate enthusiastic followings. Australian director George Miller created Mad Max in 1979. After a three-decade hiatus, the excitement surrounding the latest chapter, Fury Road is palpable.

Mad Max: Fury Road begins where the third instalment, Beyond Thunderdome (1985), left off. There, Max’s (played by the young, untarnished Mel Gibson) adversary, Aunty Entity (Tina Turner) introduces him to the bellicose citizens of Bartertown as ‘the man with no name’. Aunty’s conjuration of Clint Eastwood’s moniker from Sergio Leone’s Dollars trilogy was a deliberate act of alignment with the lone-wanderer archetype of the western genre. Gibson’s Max was a solitary, stoic, masculine protagonist embodying fundamental principle of self-sufficiency. Unlike the conventional Western hero, however, ‘Mad’ Max did not act from any broad ideological stance to improve society, but rather was thrust into individual circumstances in which he enforces order on the post-apocalyptic lawless frontier.

Fury Road’s Max, played by Tom Hardy, is clearly intended to perpetuate this mythology. He is first seen framed in isolation against the expansive deep red backdrop of the Namibian desert. He watches the landscape, waiting for the slightest movement in the sand that would signal the presence of hostile forces. Predictably, the serene landscape is interrupted in a frenzied chase-and-capture sequence that sees Max become a temporary prisoner of the film’s antagonist, the heinous Immortan Joe (Hugh Keays-Byrne). Immortan, in keeping with the characterisation of the earlier Mad Max villains (such as The Humungus in Mad Max 2: The Road Warrior, 1981), is a tyrant who uses his control over the resources of the Citadel (in this case, the water supply) to subjugate its population. Here, the thematic continuation of the Mad Max world is unambiguous. The power inequalities of the Citadel mirror Aunty’s struggle with a methane baron for dominion of Bartertown, however Fury Road largely overlooks the socio-political mechanics of the Citadel, or Max’s potential function within that model.

Fury Road is not really concerned with Max at all. The film centres on Imperator Furiosa (Charlize Theron), a ferocious woman intent on liberating five beautiful women (‘breeders’) from captivity, where they are reluctant sex slaves and child-bearing vessels. Following a turbulent encounter with Max, Furiosa sets out to deliver the women to safety at a location remembered from Furiosa’s childhood known as the ‘Green Place’. Unsurprisingly, the group is pursued by an incensed Immortan and his homicidal cronies. Once the hunt begins, Fury Road becomes a frantic two-hour chase sequence with little in common with the twisting road narrative and ambivalent violence of the earlier films.

‘Once the hunt begins, Fury Road becomes a frantic two-hour chase sequence with little in common with the twisting road narrative and ambivalent violence of the earlier films’ 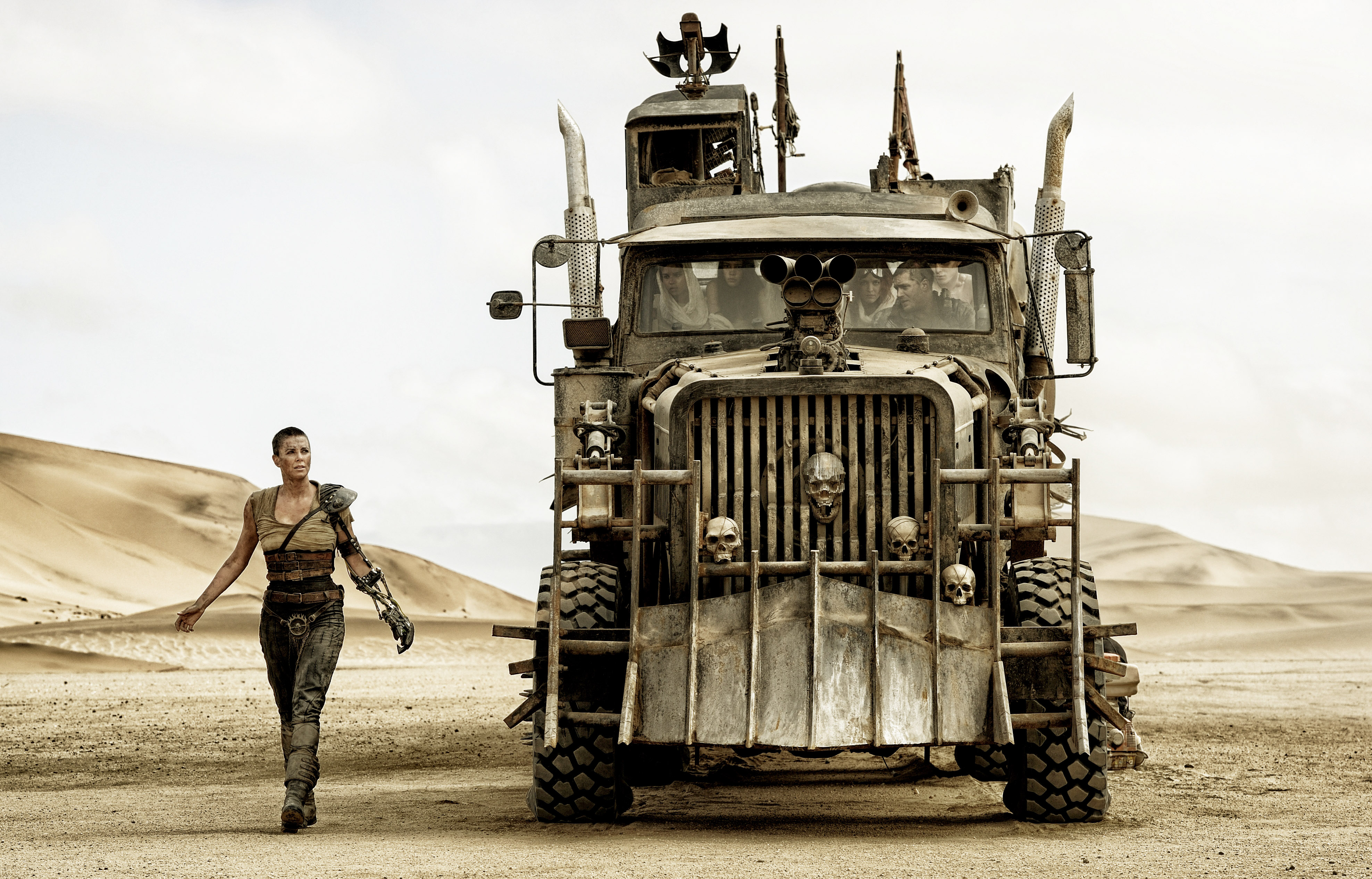 The road here does not present complex obstacles or challenges for its travellers in any traditional generic sense. There are no rambling ‘troppo’ eccentrics or isolated children. Encounters with secondary adversaries are brief and swiftly overcome. Thus, the road functions less as narrative device than as an excuse for action and impressive visual spectacles through stunts and pyrotechnics. Despite the visual cues – the kitschy, almost self-parodic, costuming of the villains, bondage-inspired leatherwear, fuel-guzzling V8s with with spikes – Fury Road is best approached from a position outside the Mad Max world. 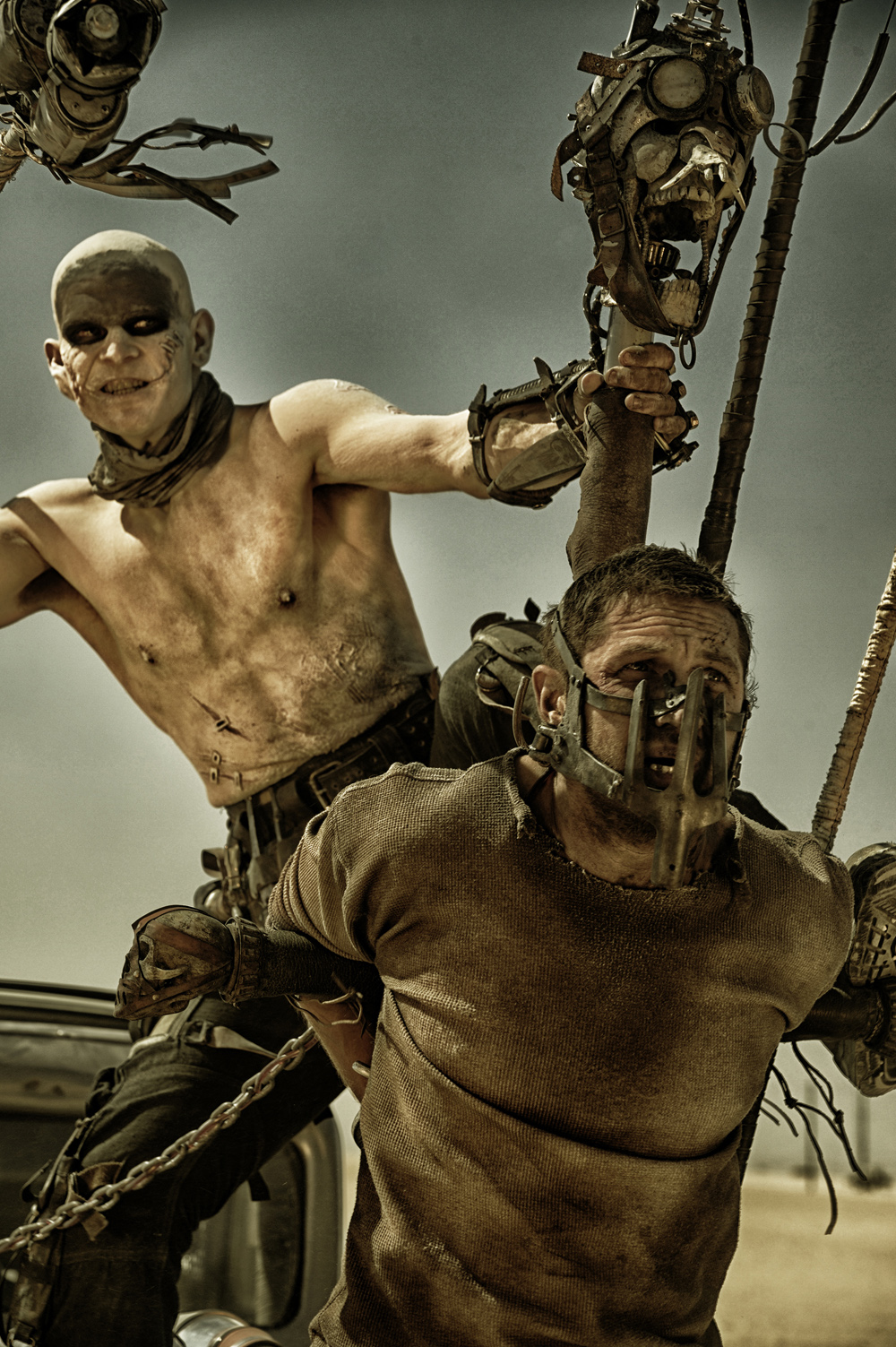 Hardy’s Max does not approximate the sort of complex, menacing road warrior that could, in any justifiable sense, be considered ‘mad’. Instead he is predictable and uncomplicatedly aligned with the ‘good’. This is echoed in the notable transition in Max’s characteristic reticence, which is presented here in the style of a brooding action hero. Max’s infrequent lines are formulaic statements about ‘vengeance and hope’ punctuated with the odd Australianism. This Max is a traumatised, violent, but ultimately unremarkable man in the shadow of a much stronger character in Furiosa.

Fury Road’s strength is not its function as an addition to the Mad Max franchise, but as a solid action film in its own right, one that plays with formal elements of colour, tone, and framing. Between the monotonous pace of the chase and the frequent explosions, there are moments of gorgeous aesthetic sensitivity. The desert is immersive with a dynamic personality, at times saturated with warmth; at others it is stark and viscerally daunting. Fury Road is a stylish, entertaining romp through familiar territory, with a strong female at the wheel. It doesn’t matter that Max is simply along for the ride.