When the 2014 Belvoir season was announced, The Glass Menagerie looked like a mouth-watering proposition. A director at the top of his game with triumphant productions of Angels in America (2013) and Once in Royal David’s City (2014) under his belt would combine with an exceptionally talented cast to stage Tennessee Williams’s first great theatrical success. What could go wrong? Nothing, according to some reviewers who have already nominated this production as the best of the year. It gives me no pleasure to be the curmudgeon in the corner radiating disappointment.

Gore Vidal wrote of Williams that he ‘could not possess his own life until he had written about it’. The Glass Menagerie (1945) is the most overtly autobiographical of all his plays. Williams wrote to the producer Margo Jones that finishing the play was ‘an act of compulsion, not love. Just some weird necessity to get my sister on paper.’ Williams was haunted by the fate of his sister Rose; a woman who was considered severely disturbed and who was subjected to an early – almost experimental – lobotomy which left her in a permanently childish condition. It seems, however, that what he was portraying was not so much the actual pre-lobotomy Rose, who was by all accounts quite aggressive and hysterical, but what he saw as her essence: a romantic fragility at odds with the harsh reality of the world.

In the 1930s, Tennessee (then still known as Tom) Williams was living in St Louis with his mother Edwina, sister Rose, and brother Dakin, a nonentity who was left out of the play. He was working at a shoe factory, a job which he loathed. When Gore Vidal confronted him with the fact that he was lying about his age, he blithely replied that the time spent at the factory didn’t count. It was a time of great emotional stress for him as he attempted to deal with the traumas of family life and with his burgeoning artistic and sexual needs.

Williams describes The Glass Menagerie as a ‘memory play’, and Eamon Flack’s inventive production never lets us lose sight of that fact. Williams originally conceived the piece – then known as The Gentleman Caller – as a film, and the play, dissolving from scene to scene with plentiful use of music, still has that filmic sense. Flack has picked up on that and has the character Tom setting up cameras which show images of the characters on side screens, dressing the set, and occasionally just observing from the sidelines what is happening on stage. What we are seeing is definitely Tom’s version of reality. The lighting design of Damien Cooper, the sound design of Stefan Gregory, and the video design of Sean Bacon are exemplary. 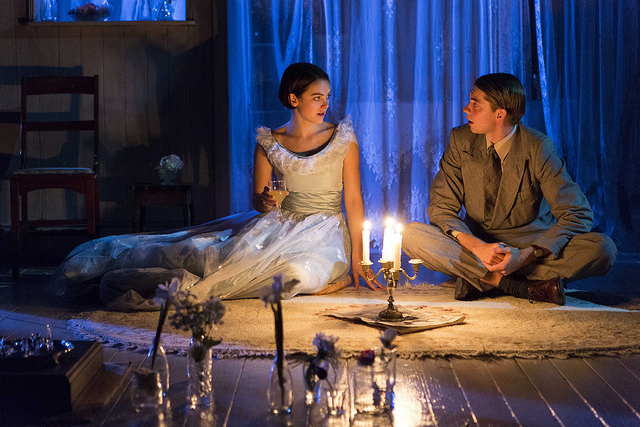 What then is the problem with the piece?

A university classmate of Williams’s described him as having ‘a charming personality, consistently gentlemanly demeanor … full of Southerly charm’. Decorum, euphemism, ambivalence, and the concept of keeping up appearances are integral to his and much other Southern writing. Strip that away and you lose much of what makes Williams unique.

When this production was announced, one of its most intriguing aspects was the casting of Pamela Rabe as Amanda Wingfield, the character based on Edwina. Williams describes her as ‘an eternal optimist’ and ‘a little woman of great but confused vitality clinging frantically to another time and place’. Rabe is a performer of imposing presence, intelligence, and power. How would she transform herself into the ultimate steel magnolia, a woman who hides her formidable will behind a mask of girlish charm? The answer is, she doesn’t. Instead Rabe comes on as a harsh, embittered woman in full tragic mode – the Medea of St Louis. The emotional volume is turned up full blast. Barbs that should be lethally flicked into Tom’s vulnerable parts are hurled like javelins. The humour that should come from the disparity between what Amanda says and the way in which she says it is completely missing. In the second act, Amanda, dressed to impress the gentleman caller she hopes will marry her daughter, the fragile Laura, makes a ludicrous appearance in an old ball gown. Instead of having her wear a moth-eaten frock from the early part of the century, Flack has her come on in full antebellum drag like a demented Scarlett O’Hara. Subtle this production is not.

‘Rabe comes on as a harsh, embittered woman in full tragic mode – the Medea of St Louis’

With Laura, Flack appears to want to make her more like the actual Rose. In the first act she comes across as quite strong, almost forceful. When Amanda rounds on her for dropping out of secretarial college, far from cowering in front of her formidable parent she comes right back at her. But this goes against the character as written, and Rose Riley has trouble linking this first act Laura with the shy, delicate Laura who gradually opens up to her gentleman caller. 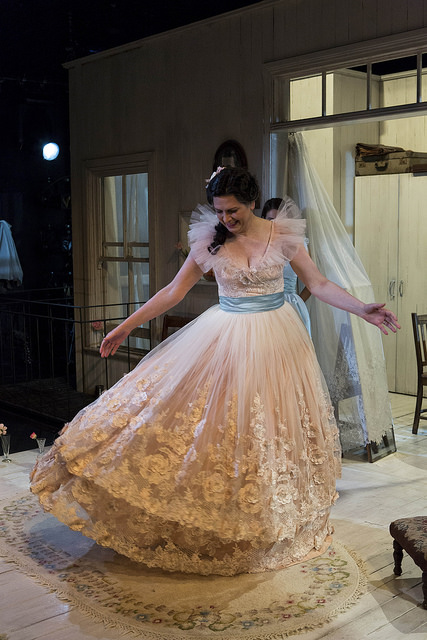 Luke Mullins differentiates well between the openly gay narrator Tom and his younger, more confused, self. But it again says something about this production’s lack of emotional subtlety that the concept of ‘going to the movies’ is just seen as a euphemism for wandering the streets late at night – when, as Williams memorably put it, ‘all the unnecessary people have gone’ – and having drunken sex. Movies were a means of escape for gay men of the era just as the very same films were for the next generation who watched them on daytime television during their lonely childhoods.

Jim, the gentleman caller, is the representative of the outside world and thus the least complicated character in the play. Harry Greenwood makes much of his gangling charm and self-absorption.

It is a shame that such a formidably talented group should have lost the essence of this great play.