English Mozart scholar Edward J. Dent once dismissed the libretto of The Magic Flute as ‘one of the most absurd specimens of that form of literature in which absurdity is regarded as a matter of course’. Michael Gow’s generally marvellous translation and adaptation of Emanuel Schikaneder’s libretto for Mozart’s final opera (or penultimate opera, depending upon how pedantic you want to be) turns the absurdity of the plot to the work’s advantage by offering a quick-paced adventure in the spirit of Hollywood ‘B’ movies of yesteryear. We are hardly given time to catch our breath and contemplate the unexplained volte-faces. You simply hop on board for the ride and let it take you through its exhilarating twists and turns. Forget logic and enjoy the fun.

Taking their cue from the pyramids and palm groves of the original scenario, Gow, who also directed, and Robert Kemp, designer, set the entire opera inside an ancient Egyptian temple. But we are not in ancient times. This is the Egypt known to us from action, horror, and murder-mystery films – Indiana Jones, The Mummy, Death on the Nile – a world of archaeologists, adventurers, and 1930s socialites.

Given that this was a travelling production – Hobart was the final leg of a twenty-six-stop tour of towns and cities in Victoria, New South Wales, the Australian Capital Territory, and Tasmania – Gow had to economise on some of the personnel (a few singers took more than one role) and shrink the number of choristers. The Three Boys, on the other hand, were enlarged to an entire children’s chorus, a lovely touch as it brought community input to each leg of the tour, with the children drawn from the various towns and cities. (The Hobart children’s chorus was sung by youngsters from a local drama school, Exit Left.) Full marks to Opera Australia for this initiative. 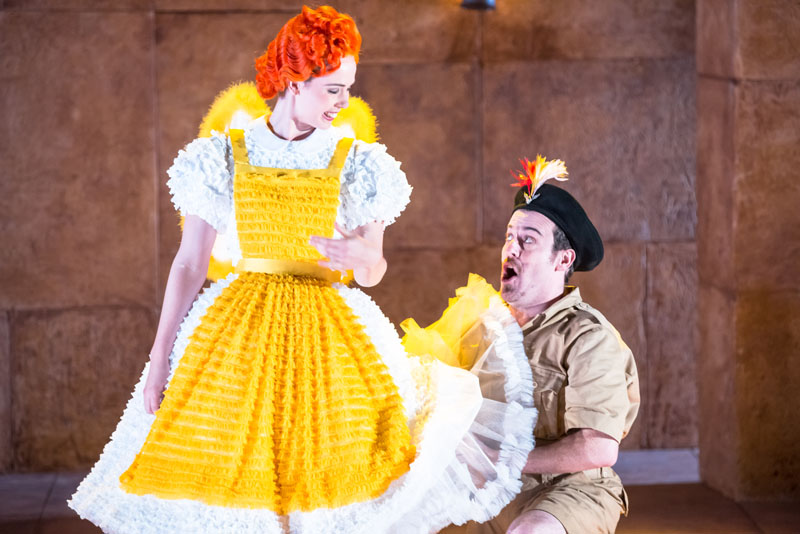 No sung role in the opera as composed by Mozart was jettisoned, but, in the riskiest move of all, Mozart’s fairly substantial orchestra was reduced to a skeleton crew of only nine. On paper, this looked absurd (no clarinets, for starters!) but much to my surprise was not detrimental overall. The severe paring-down was the work of Andrew Greene, and it speaks volumes for the quality of musicians in the orchestra that the chamber-sized dimensions did not expose any weaknesses.

Not only was the orchestra made up of professionals in the early stages of their careers, so too was the cast, for the most part. Vocal standards varied. Stacey Alleaume, who sang Pamina, was perhaps not an ideal choice for such a light role, but she possesses a beautiful, rich voice and has rock-solid musicianship and stagecraft. Also impressive were the Three Ladies: Hannah Dahlenburg, Emma Castelli, and Anna Yun. But the standout performer was the superb Andrew Moran as Papageno. A fine singer and a brilliant comedian, Moran pretty much walked away with the show. (He was ably assisted in his big number, ‘Ein Mädchen oder Weibchen’, by strong direction and an excellent translation by Gow, who, it must be said, was less inspired in his translation of Pamina’s ‘Ach, ich fühl’s’.) 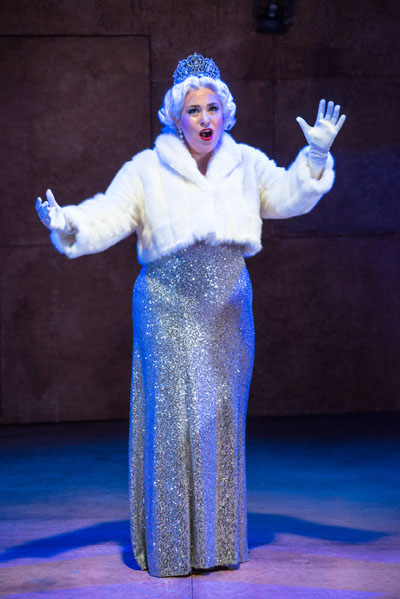 Hannah Dahlenburg as Queen of the Night (photograph by Albert Comper)

Gow’s most surprising intervention was amending the close of the opera so that the Queen of the Night and her entourage were not banished but were reconciled with Sarastro and his band of priests (or ‘philosophers’, as they were called in this production). Indeed, seeing Sarastro on bended knee before the Queen brought a curious echo of ‘Contessa, perdono’ from the close of The Marriage of Figaro.

Keeping the musical side of things together was another early career professional, conductor Paul Fitzsimon, who was alert to the dangers of the exposed orchestral arrangement and the contingencies of a predominantly young cast. He coped magnificently.

With the demise of Hobart Baroque, opera lovers in Hobart are in the incongruous position of having a gem of an opera theatre, the Theatre Royal, and virtually no opera to fill it. Given the strength of this production of The Magic Flute, I only hope that Opera Australia will head back this way again. Soon.

The tour of Opera Australia’s The Magic Flute, directed by Michael Gow and conducted by Paul Fitzsimon, runs until 20 September. Performance attended 19 September at the Theatre Royal, Hobart.