If one accepts the aptness of the old adage ‘one picture is worth a thousand words’, the range of pictorial delights offered by Barrie Kosky’s production of Handel’s oratorio Saul (1739) would test my editor’s word limit – generous though they always are.

The stage teems with vivid tableaux: one moment, vivid, swirling crowds of chorus and soloists; the next, stark, austere images of isolated characters in a deserted, Lear-like or Beckettian landscape; the next, exuberant juxtapositions of quasi-Hollywood dance numbers choreographed for a wonderful sextet of dancers and an astonishingly well-drilled large chorus. And it all contributes to an unforgettable evening of music, and musical theatre, the like of which – apart from Robyn Archer’s two festivals-- has rarely been seen in Adelaide since, well, Kosky’s own festival of 1996.

Back then (surely not twenty-one years ago, given how alive the memories remain), audiences marvelled at the Batsheva Dance Company; the haunting and evocative Whirling Dervishes; the exuberant theatricality of the Maly Theatre’s Gaudeamus; and the spell-binding combination of music and image in Hotel pro Forma’s Operation Orfeo. It is not, I think, drawing too long a bow to link the distinctive yet complementary qualities of those productions with Kosky’s own fondness for, and command of, a theatrical language which combines all their elements.

The opening twenty minutes of this production are worth the price of admission on their own. After three linked overture numbers, performed in darkness, a spotlight gradually illuminates downstage centre a large object that turns out to be the severed head of Goliath. (The way this large prop is used throughout the scene is, by itself, an object lesson in stagecraft.) Then, suddenly, the stage explodes into life with an unforgettable image of a large, stage-spanning white table upstage occupied by the chorus, stands of flowers, and the odd carcass of slaughtered animals – all contributing to the swarming festive atmosphere.

The State Opera chorus has seldom been seen, or heard, to better effect. They play a central role in Kosky’s staging of the work, being required to perform drilled movements, hieratic gestures, expressions of attitude to the events swirling round them, and, oh yes, of course, sing as well. I am sure it’s not giving away a directorial secret when I say that one of the major instructions to the chorus from their director was that they deliver the text ‘like golden bullets’.

Charles Jennens’s (at times somewhat recalcitrant) text is certainly one of Kosky’s major focuses – not just its delivery, but its translation into stage action, attitude, and gesture. To be sure, some of the singers handle this more confidently and idiomatically than others: foremost here being Christopher Purves’s superlative Saul, Christopher Lowrey’s spirited David, and the High Priest/Abner/Amalekite/beruffled quasi-conferencier figure of Stuart Jackson. 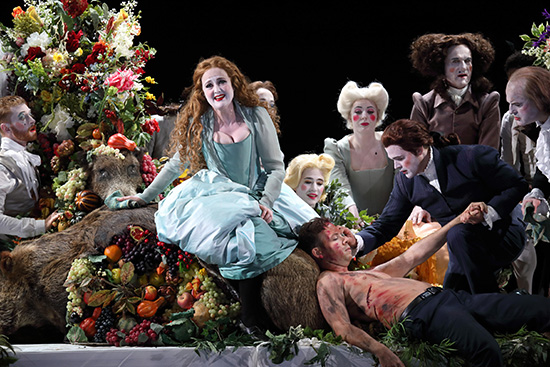 But for all the unexpected departures from the original biblical story that Handel’s intriguing adaptation incorporates, and the difficulties his text must have posed for the director, the production only rarely betrays its original, somewhat static oratorial origins. There are moments in the first half when the quasi-domestic scenes between Saul, his daughters Merab and Michal (the first of whom he offers to David in reward for his defeat of the Philistines, only for her to scorn him, while David himself is much more attracted to the other sister), and his son Jonathan threaten to outstay their da capo welcomes.

Elsewhere in the production, Kosky’s and his inventive choreographer, Otto Pichler’s, handling of these hallmark ingredients of baroque opera never resorts to camp or overcooked bits of busy business, but always accommodates the musical essence of the scenes. At one moment the chorus sing so many Allelujahs that one expects the massed choirs of the Lord’s angels to wake and join them on the Festival Theatre stage: but the staging of this moment (and so many more like it) takes the breath away in its attention to the theatrical and musical realisation.

And while the eye is captivated by Katrin Lea Tag’s astonishing set design – which essentially amounts to not much more than the abovementioned long table (which turns out to be two) and a carpet of black/grey artificial dirt spread over the entire stage – and her ravishing costumes, which look as if they have sprung from a series of scenes from a Hogarth flipbook as they might have been coloured in by, say, Watteau, the ear revels in the realisation of the score in the hands of baroque expert Erin Helyard and the Adelaide Symphony Orchestra.

Among the soloists, Purves and Lowrey stand out for their musicianship and shaping of the line: the latter’s delivery of the two words ‘O King’ offers the most beautiful, powerful, and penetrating sound I have heard on an operatic stage from a counter-tenor since the days of the great James Bowman. Mary Bevan’s Merab is forceful and stylishly sung; Taryn Fiebig produces the notes beautifully, though I was at times left wondering whether she was singing in another language; Kanen Breen excels in his cameo as The Witch of Endor; and, while Adrian Strooper copes well enough with the middle and top of Jonathan’s demanding vocal line, he is too often barely audible in the lower register. 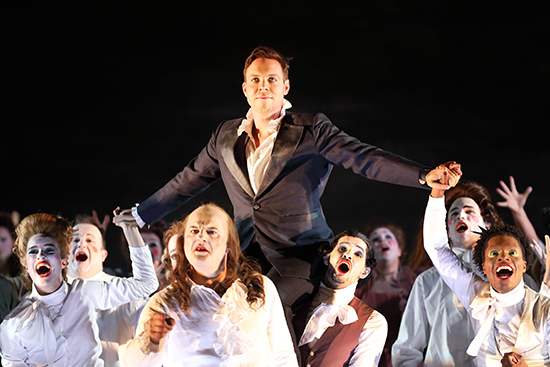 Christopher Lowrey as David (in suit) and Christopher Purves as Saul (in front) in Saul, performed at the 2017 Adelaide Festival (photograph by Tony Lewis)

What this production offers the audience is an astonishing series of images, always linked to the music and the stage action, never blandly repetitive: the first act opening with its accumulation of what another theatre composer has called ‘colour and light’; the second presenting a stage dotted with dozens of lit candles piercing the blackness; and throughout, an orchestra always responsive to the music’s requirement of crisp rhythms, clear textures, and carefully gauged shifts of mood and tempi.

Saul, composed by George Frideric Handel and directed by Barrie Kosky, as performed at the Festival Theatre, Adelaide Festival Centre from 3 to 9 March 2017. Performance attended: 3 March.