The first is a revival of Francesca Zambello’s production for Covent Garden and the Norwegian National Opera, which came to Sydney in 2008. We are familiar with the New Yorker’s assured, coherent productions in this country, especially her Lady Macbeth of Mtsensk, and the present writer enjoyed her Californian Gold Rush-inspired Ring in San Francisco (2011), followed by Les Troyens at the Met the following year. Here, Zambello and revival director Matthew Barclay strike a sure note of Spain with abundant spectacle and rhythmic interplay between principals, choristers and dancers. The sets are excellent, and the costumes suitably Goyaesque.

The singing was mostly impressive, with some lapses. In a way the star was Georges Bizet’s vivacious score, first performed in 1875 (Paris), the year of his death at the age of thirty-six. In an almost Joyce-like way Bizet seems intent on outdoing himself at every turn, bettering the preceding aria or ensemble or orchestral interlude. The tuneful bombast of the Toreador Song and the exquisite pathos of Micaëla’s music are interspersed with small miracles like the beautifully disengaged Entr’acte to Act Three and the Rossinian quintet that follows (performed brilliantly on opening night). Conductor Brian Castles-Onion and his players seemed to relish the challenge. 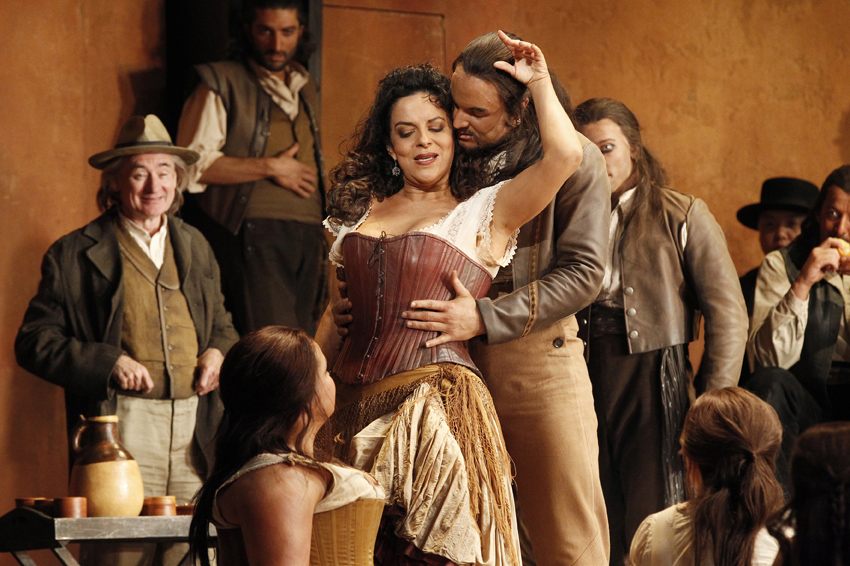 David Pomeroy, a rather less sultry Don José, was worrying in the first act and seemed indisposed, with some wayward singing and poor French. Like an anxious florist we feared for the Flower Song. But as it happened Pomeroy righted himself and seemed surer the higher he sang.

Natalie Aroyan was a radiant Micaëla, and ‘Je dis que rien ne m’épouvante’ was the vocal highlight of the evening. The gypsies were outstanding; Jane Ede stood out as Frasquita. Escamillo often steals this opera, but Michael Honeyman, entering on horseback, was not arresting.

Act Four, with the inevitable murder (slaughter really), is a grotesque dramatic culmination, and our two principals did it powerful and disquieting justice on opening night.

Opera Australia will perform Bizet’s opera-comique ten times in a row, and the principals will relievedly alternate.

The speed with which Giuseppe Verdi conceived his mid-career masterpieces is just one of his marvels and audacities. Alexandre Dumas published his autobiographical novel La Dame aux camélias in 1848, and the play based on it was produced in 1852. That same year Verdi and librettist Francesco Maria Piave, needing an opera for Carnival in Venice, decided to adapt Dumas’s play. La Traviata followed in Venice a little more than a year later (6 March 1853). It was the first opera to use a contemporary theme (‘A subject from our own time … I am delighted with the idea,’ wrote Verdi). This was more than the first Venetian audiences could cope with, though Verdi had in fact set it in the age of Louis XIV, with 1700 costumes. Verdi, lumbered with a mediocre and refractory cast, described the première as a fiasco (‘Was it my fault or the singers? Time will tell?’). Time did tell, and Verdi’s eighteenth opera soon attained a fame and popularity it has never lost.

Victorian Opera’s current production comes to us from Italy. It is the work of director Henning Brockhaus and designer Josef Svoboda. Brockhaus, in his Director’s Message, is unequivocal about Verdi’s opera. His Violetta Valéry is a ‘whore’, a ‘donna puttana’ (‘as clearly and literally stated by Verdi’), and this is a drama of hedonism, prostitution, dependency, and social disgrace. Brockhaus updates Dumas’s drama from 1850 to 1870, around the time of the Paris Commune.

The enormous suspended mirror is a brilliant if not original device, never more so than during the final scene when, verticalised for the first time, it mirrors the entire audience and invites reflections on society’s complicity in Violetta’s downfall. Throughout the night we can either watch the action on stage or prefer the alternative mirrored configurations.The brilliantly coloured production is agitated and sensual throughout. Excess is the rule chez Violetta. The action is frantic, often clumsy. No sooner has the famous hostess met young Alfredo Germont, her admirer from afar, than she is allowing him to kiss her bedizened neck. Unlike so many productions of Traviata, there is nothing stately or bourgeois about this court. Life here is tactile, kinetic, desperate, lunging – and likely doomed. 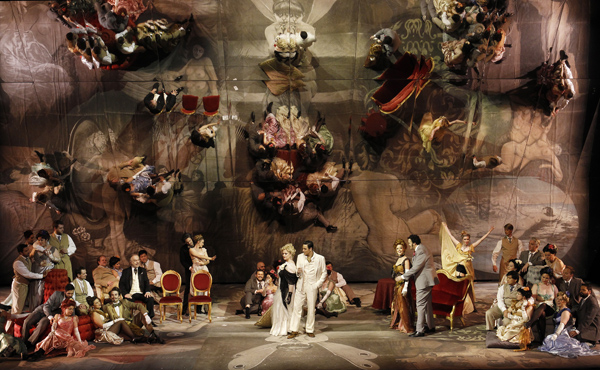 This was, improbably, the Australian professional début of the 34-year-old soprano Jessica Pratt, who was born in England, grew up and studied in Australia, then moved to Italy in 2003 on winning the Australian Singing Competition. Since then she has become one of the prime Lucias of the age, most recently at La Scala. She has starred in Bellini’s La Sonnambula and I Puritani, and lovers of bel canto should watch her flamboyant ‘Ah! non giunge’ from La Sonnambula on YouTube.

There was a real sense of occasion on opening night, and no one was disappointed. Pratt is the real thing. The voice is agile, expressive, beautifully shaded at times then very powerful. Her Italian is faultless. There were few trills on opening night, but we know from YouTube they are there. She coped with all of Verdi’s demands. This was, after all, her very first Violetta, and it is one of the most taxing roles in Italian opera, requiring immense stamina and a huge vocal range. Pratt got better and better with each act, and her ‘Addio del passato’ and ‘Gran dio! Morir si giovane’ in Act Three were stirring. It will be good to hear Pratt in a friendlier acoustic. Her Majesty’s does few singers justice. Risking interdiction, your reviewer moved down to the front during the first interval, and formed a better sense of the power – and potential – of this remarkable voice than was possible towards the back of the stalls, beneath the muffling overhanging balcony.

Alessandro Scotto di Luzio (Alfredo) – in another Australian début – was equally welcome. He looked the part and was magnificently costumed. It was excellent to see two plausibly young and smitten lovers in an opera that often attracts older singers. Di Luzio’s rapport with Pratt was evident, and their several duets were memorable. This talented young tenor from Italy was at his best in ‘Un dì, felice’, ‘De’ miei bollenti spiriti’, and the closing minutes of Act Two, when Alfredo disgraces himself in front of Violetta and his father.

José Carbo proved yet again what a superlative baritone he is. Carbo, our finest singing actor, is incapable of a false histrionic effect, and he was suitably insufferable yet credible as Giorgio Germont, who cruelly parts Violetta from Alfredo, only to realise the folly of his deeds. The long confrontation with Violetta in Act Two – one of the greatest scenes in Italian opera – was beautifully done, as was his ensuing scene with Alfredo.

Richard Mills and the Victorian Opera Chamber Orchestra gave a refined, nuanced reading of the score. The tempi were slow at times, and there were moments when one wanted a more authentic Verdian surge and pulsation, but here again the woolly acoustic and pinched pit were doubtless factors.

No admirer of Italian opera should miss this thrilling realisation of Verdi’s luminous score and Piave’s infinitely subtle version of the Dumas.

Carmen, Opera Australia, State Theatre, until 25 May. Performance attended on 15 May 2014.

La Traviata, Victorian Opera, presented in association with Fondazione Pergolesi Spontini. Her Majesty’s Theatre, until 29 May. Performance attended on 17 May 2014.