After two hapless ventures into the world of Verdi in 2013 (his bicentenary year), Opera Australia has given us an entertaining new production of Rigoletto – one that will probably stay in the company’s repertoire for as long as its lucrative predecessor.

Elijah Moshinsky’s slick production (1991), which leaned on Fellini’s La Dolce Vita, was just one of many radical updatings of Verdi’s 1851 masterpiece, which had its première in Venice. Director Roger Hodgman bucks this trend and restores the opera to sixteenth-century Mantua.

Designer Richard Rodgers makes intelligent use of the revolving stage, and his sets are impressive. Tracy Grant Lord’s costumes are superb.

Warwick Fyfe is a very different Rigoletto from my last one – Dmitri Hvorostovsky in Vienna four years ago, who was suave and humpless, quite the silveriest man at court. Fyfe – twisted, filthy, drooling, minus a tooth – began confidently, as one expected after his recent Alberich – perhaps the highlight of that well-sung Ring. Fyfe, a Method actor through and through, enjoyed the busy opening scene when the duke prepares to seduce the Countess Ceprano. Rigoletto, among these ogling desperadoes, was suitably crude and insolent – deeply anxious too, underneath the costume that he resents. Monterone’s thunderous curse terrified the jester. 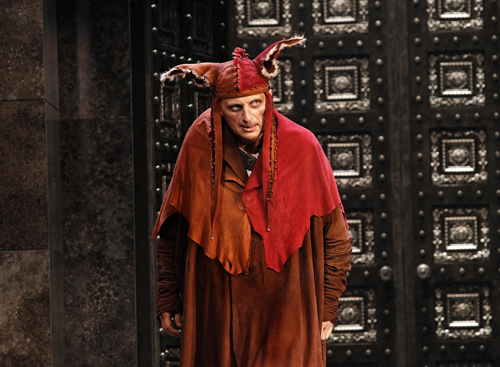 It was a busy, inhabited performance, with some of method’s limitations: certain histrionic overreliances. Fyfe’s pitch was uncertain at times, and he seemed under-voiced during the great Act Two duet with Gilda (‘Piangi fanciulla’). Renato Palumbo, in a rousing few minutes, drove the orchestra hard during Rigoletto’s great aria ‘Cortigiani, vil razza dannata’. Rigoletto was almost completely eclipsed by the end (unlike Hvorostovsky, who milked it like a mad scene). There was an uncomfortable, barking quality to some of Fyfe’s later singing on opening night.

The two lovers – if that’s the right word in the context of this sick drama – could not have been better. Sydney has already heard Gianluca Terranova (Duke of Mantua) as an al fresco Alfredo, and Rodolfo; but this was his first performance in Melbourne. From ‘Questa o quella’ (sweetest of tunes that virtually opens the opera) to the witty, somnolent reprisal of ‘La donna è mobile’, Terranova was in control, with sure high notes and impeccable diction. That Terranova looks like Tony Curtis in one of his sleazier roles was not inopportune.

Irina Dubrovskaya is probably the best Gilda we have heard in Melbourne since Joan Carden sang the role for Richard Bonynge at the old windy Palais in 1980 – unforgettable performances those. Dubrovskaya, a slender, rather balletic blonde from Siberia, was making her first appearance with the company, but she has sung this role many times before – and it showed. With her stylish pale-blue dress and blonde mane, she looked like a perfect Florentine vision. She moved delicately and for once brought realism and pathos to Gilda’s longing for information about her family name – the family past. ‘Caro nome’ – one of the hardest, highest, most exposed and exposing of arias for a soprano – was sung with ease, grace, daring, and a secure trill. The confidence with which she paused before the final, interpolated high note was galvanising – and Dubrovskaya thoroughly deserved the long ovation that followed. 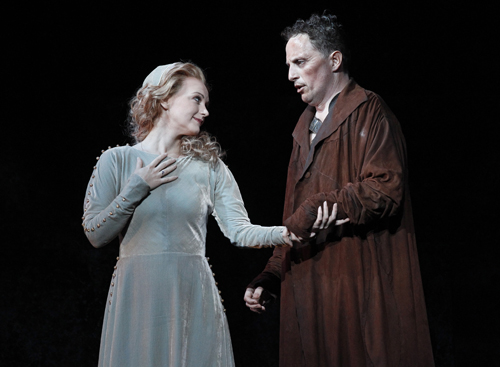 Most of the smaller roles were in good hands. Daniel Sumegi (such a fine Hagen last year) brought his customary presence and secure low notes to the role of Sparafucile; his first scene with Rigoletto was a highlight. Pelham Andrews, in the small but crucial role of Monterone acted well but seemed younger than the daughter he was ostensibly trying to save. It is a light bass voice for this taxing music. Sian Pendry was an excellent, ringing Maddalena.

The production itself is clear and followable. There is no fussifying here – a relief after the absurdities of La Fura’s Un ballo in maschera and the revival of Graeme Murphy’s Aida. This is a rather old-fashioned production, and nothing gets in the way of the singers, who are free to stand and deliver. There are some minor lapses, when a certain haziness about the placement of singers accentuates the inherent absurdities of the opera. Two examples: the light outside Rigoletto’s house is surely strong for the jester to realise he is being duped by the courtiers, who are about to abduct Gilda. In Act Three, Sparafucile’s inn must be split so that we can witness the intrigues inside and the filial anguish in the laneway, but here any division was nebulous, robbing the scene of a certain credibility (if that matters in this admittedly preposterous drama).

After this promising beginning, it will be interesting to see the new production of Eugene Onegin.