It’s a story biblical in resonance: prodigal son Hunter returns after seven years in the wilderness, to find younger brother Gordon finalising a lucrative real estate deal; the homestead’s boarded up, ageing Mum has been moved to a tiny flat, and the Utopia they knew as boys is set for redevelopment. The brothers come to blows, family secrets are uncovered, and the stage is set for a ninety-minute meditation on belonging, loss, self-discovery and the relentless pace of progress.

In less skilful hands, Boy Out of the Country’s plot could seem well-worn, even trite. To playwright Felix Nobis’s credit, he takes an old story and reinvents it as fresh and relevant. Much of this is due to the play’s clever structure, written in taut, idiomatic verse that eschews the tum-ti-tum of Banjo Paterson and energetically replicates the flow of everyday speech. Touching, funny, raw, bittersweet, the play is at once uniquely Australian and thematically universal.

This production (directed by Nobis and Fleur Kilpatrick) is also fortunate in its cast. Martin Blum as the brooding Hunter and Matt Dyktynski as Gordon, the less adventurous brother with a sharp eye to a good deal, vividly convey the anger, resentment, and unspoken love of two very different personalities bound together by conflict and a shared history. 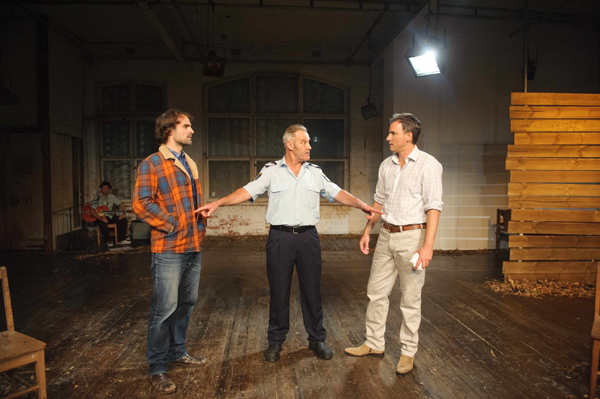 As Gordon’s wife (and Hunter’s former sweetheart), Rachel, Amanda LaBonte gives a spirited performance as the one forthright, clear-thinking presence in the emotional lives of these two men. Special mention must be given to Chris Bunworth as Sergeant Walker, a country ‘character’ with a penchant for Scotch, fruity vernacular and a pocketbook of memories, highlighted in a wonderfully rich and humorous monologue filled with regret for what has been lost and what might have been.

The sightlines of fortyfivedownstairs are notorious, as the stage is split in two by intrusively branching pillars. Rob Sowinski’s minimalistic set turns them into trees, beams, cell walls and makes the most of the space. An original score and live guitar music by Bang Mango Cools add to the atmosphere. 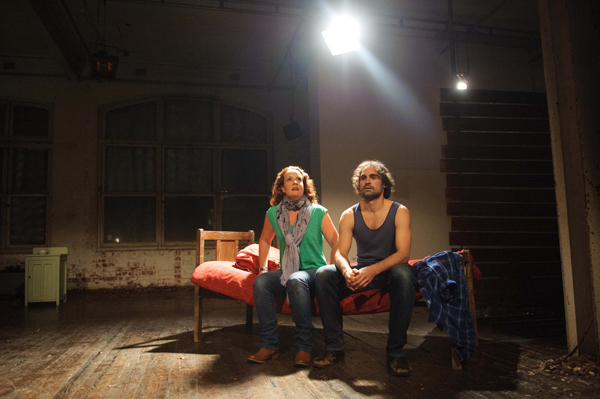 The play was first written as part of Melbourne Theatre Company’s Affiliate Writers’ program run by Julian Meyrick in 2007; since then it has developed considerably. There are still flaws. Characters ramble on excessively about the good old days and sacrifices to progress and greed, which causes the pace to flag at times. Hunter’s apparent stint in prison and the reason for his return are never fully explained. Jane Clifton seems uneasy in her role as Mum, though her performance grows in confidence. The last ten minutes of the play also feel rushed, as if Nobis were trying to wrap up matters with a neat ending that almost beggars belief.

Nevertheless, Boy Out of the Country will appeal to a large cross-section of theatre goers. It is accessible, tightly produced, and very much a well-made play at a time when text-based theatre is considered unfashionable by many other independent companies.

Larrikin Ensemble Theatre’s production of Boy Out of the Country, directed by Felix Nobis and Fleur Kilpatrick, runs until December 8 at fortyfivedownstairs. Performance attended November 2013.