The Trials of Portnoy: How Penguin brought down Australia’s censorship system by Patrick Mullins

Listen to this review read by the author.

Okay, I’ll tell you what’s wrong with this country. For a start, we have this profoundly stupid and deeply irritating myth that we’re all irreverent freedom-loving larrikins and easygoing egalitarians, when it is painfully obvious that we have long been a nation of prudes and wowsers, that our collective psyche has been warped by what Patrick Mullins describes, with his characteristic lucidity, as ‘a fear of contaminating international influences’, and that we are not just an insular, conservative, and deeply conformist society, but for some unaccountable reason we take pride in our ignorance and parochialism. And let’s not neglect the fact that we are cringingly deferential and enamoured of hierarchy. Oh yes, it’s all master–slave dialectics and daddy issues around here. Why the hell else would we keep electing entitled, smirking, condescending autocrats? In fact, there are few things your average patriotic Australian likes better than the authoritative clamour of some dead-eyed, bull-necked crypto-fascist bashing on the bathroom door and demanding to know what we’re reading in there. Which, for most of the twentieth century, was not much. We banned Balzac, for fuck’s sake. We banned Lawrence and Huxley and Nabokov. We banned Hemingway, Baldwin, Vidal, Salinger, Donleavy, Burroughs, Miller, and McCarthy. We banned Ulysses, then unbanned it, then realised our mistake and banned it again. We prosecuted Max Harris for publishing a poet who didn’t even exist. For a while there, the list of banned books was banned. But then what happens if I read one of them by accident, Dr Spielvogel? Mullins has all the receipts. For years it was ‘assumed incontrovertibly by common law that obscene writings do deprave and corrupt morals, by causing dirty-mindedness, by creating or pandering to a taste for the obscene’. Who stands a chance against such impeccable circular reasoning? No wonder the country is a neurotic mess. No wonder we can’t even get philistinism right. When the attitude of our guardians of public morality for most of the last century was ‘I have no idea what this is or what it might mean, and I have no intention of finding out, but I don’t like it’, declaring ‘I know what I like’ represented a significant advance. Saying ‘I know it when I see it’ qualified you as an intellectual. Of course, the whole wacky censorship regime was justified on the grounds that it was upholding ‘community standards’, disregarding the obvious point that if the community had any standards there would be no need to uphold them. What standards? Artie Fadden’s trade minister, Eric Harrison, thought he knew what they were, but only because he copied out all the rude bits of Ulysses and mailed them to some church groups. Apparently, they weren’t impressed. He should have referred himself to the vice squad – I mean, what kind of creep sends unsolicited smut to little old ladies? This is all in Mullins’s book, if you’re interested, which you should be, because believe me the same clueless creeps are still in charge. Mullins wrote a biography of Billy McMahon, so he understands better than most that the dominant genre of Australian political life is farce. The Trials of Portnoy is about a rare instance of sanity prevailing, though of course a regime of unrelieved idiocy doesn’t just collapse of its own accord. It needs to be brought down. A few cheeky student publications were never going to achieve anything. No, it took a novel of perverted genius, a novel backed by a major publisher, a novel about a compulsive onanist that’s so funny that anything it touches instantly becomes ridiculous. Fight farce with farce was the basic idea. And hoo-boy did it work. It was like that Monty Python sketch about a joke that’s so funny it kills people. The book immediately sells 100,000 copies and they’re debating whether or not it meets ‘community standards’. A communist bookstore over in Western Australia sold so many copies they were able to renovate with the profits! It’s brilliant when you think about it. I don’t know, Dr Spielvogel. For some reason, I find debates about ‘literary merit’ incredibly funny. And I find the thought of lawyers debating literary merit before bewigged judges even funnier. Imagine writing a book that’s basically an extended psychiatrist-couch gag about a guy who can’t stop pulling his putz and it leads to a string of court cases trying to establish if it’s ‘obscene’. If! Imagine them all in their robes, scratching their beards, trying to work out if a novel about a neurotic jerkoff has ‘depraving’ effect. Well, they all read it. They should know! Picture a procession of the nation’s finest literary minds summoned as expert witnesses. Such experts! James McAuley, Vincent Buckley, Patrick White, Fay Zwicky, Dorothy Hewett – all taking the stand to attest to the literary merits of a novel about a guy who whacks off into his sister’s brassiere. But what about the bit where he sticks his schlong in the raw liver? Oh, that bit’s especially meritorious, m’lud. Some academic called the book enriching. I mean, this is Alexander Portnoy we’re talking about here. If he’s enriching, where’s a guy supposed to go for a little depravity? A qualified psychologist testified that the novel had ‘the truth of a tone poem or landscape’. When that happens, you know you’ve won. It’s a funny thing, Dr Spielvogel, I can’t quite explain it, but reading Mullins’s book actually made me feel a little better. 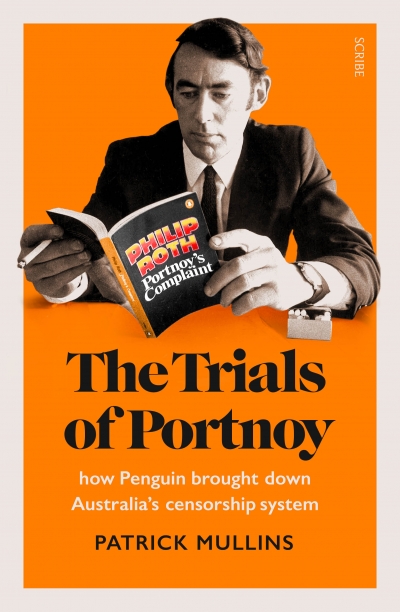 The Trials of Portnoy: How Penguin brought down Australia’s censorship system