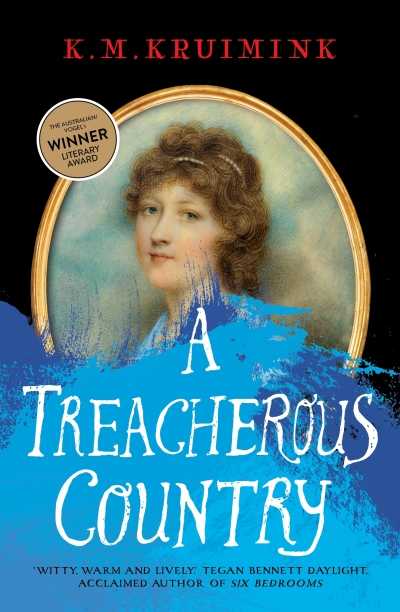 Tasmanian writer K.M. Kruimink’s first novel, A Treacherous Country, a witty, cracking tale set in Van Diemen’s Land in the 1840s, has more than a hint of Dickens and Moby-Dick about it. It won The Australian/Vogel’s Literary award, established in 1980 for an unpublished manuscript by an author under thirty-five, which has launched the career of Kate Grenville and Tim Winton, among others. The award sets high standards – it was not awarded in 2019 due to a ‘lack of quality’. Kruimink, who described it as an ‘absolute life-changer’, is a worthy recipient.

The narrator is Gabriel Fox, aged twenty-five, from Norfolk, who is the third son (‘he who does not matter’) of a baronet and gentleman farmer, Sir Alfred Fox and his wife, Apphia Fox. Gabriel has made the long, arduous journey by sea from England to the colonies on a mission, which he describes variously as ‘an Odyssey’, ‘a Grave Mission’, and ‘my great Purpose’. The said mission is to find Maryanne Maginn, who was transported from England as a convict more than thirty years ago, when she was fifteen. He has been set that task by Maryanne’s great-aunt, the formidable Mrs Prendergast, with whose great-grand-daughter, Susannah, Gabriel is love. He believes that if he returns to England with Maryanne, Mrs Prendergast will consent to the marriage.