Listen to this poem read by the author.

Charles Baudelaire’s mother—
orphaned at seven—living
on the charity of friends—
at twenty-six married
an ex-priest, widower—
After her husband died she married again
and was happy—

‘When you have a son like me
you do not remarry’—

He asked her endlessly for money—
She repaid his publishers—

He wrote to her—
‘I am the only object which makes you live’—
‘After my death, you will no longer live, that’s clear’—

She gave him the doll, doll-bed and kitchen that he wanted—
He spent hours combing his doll’s hair—
He had a ‘saber hammered in gold’, a knight’s ‘tin decoration’—
He was, he wrote, ‘eating like a wolf, sleeping like a sack’—

He wrote to her almost every day—
He wanted letters, food packets, skates, visits—
She gave him these—
Whenever she left—they say—he felt abandoned—

‘Quiet endurance and courageous resignation’,
he said, were his thing—
and his suffering, ‘only the whim
of a pitiful, pleasure seeking creature (Mother)’ —

Arthur Rimbaud’s mother—
according to reports—
was ‘sour-faced’—
was ‘narrow-minded, stingy,
completely lacking in a sense of humour’—
was ‘renfermée, têtue et taciturne’—
He named her his ‘Mouth of Darkness’—

His father—
‘good-natured, easy-going, generous’—
came home on leave only to give her another child—
ten weeks with her—five children—
after which he did not come back again—
When the youngest was four he retired
easily to Dijon—

She had to call the police to bring him home—

In Paris, he put sulphuric acid into Charles Cros’s water—
He stabbed a knife into Verlaine’s wrist—
His ‘teen rebel phase’—they say—was ‘a reaction to life with Vitalie’—

From Africa, he kept writing her letters—
he wanted books, goods—he had tasks for her—
He had ‘a romantic view of his father’—

‘My dear Mummy—
I got your letter and the two stockings alright—
Do not be upset about all this, however—
But it’s a poor reward for so much work—
so many privations and troubles—
P.S. As for the stockings, they are useless—I shall sell them somewhere’—

In 1890, a photo—she stands in her garden with flowers—

‘Dear Creaturely Mop, this seems a good time to warn you
I am down to my last three pounds’—

She wrote to him—
‘Marriage would be no certain guarantee
as to socks being always mended,
or meals ready when they are wanted.
Neither would it be a good idea to marry
just for these comforts. There are other things
just as important’—

for which, she has been held responsible for his not marrying—
‘He couldn’t marry anyone
because he was involved with his mother’—

It is said—      she was ‘nervous, constantly whining’—
‘she was the poet’s muse—and his millstone’—
She wrote—   ‘When I came to the sketch of me, I laughed outright’—

His father attended Nazi rallies—
In his mother, though, he complained of
‘a kind of “defective mechanism”. Her ideal is
“to collapse” and to be taken care of’— 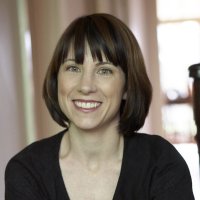