President Joe Biden has given cause to hope that the position of Science Advisor to the President of the United States might be returned to a position of influence after years of neglect under Donald Trump’s presidency. Biden nominated Eric Lander of MIT and, for the first time, elevated the advisor’s role to a Cabinet-level position. Lander will also sit on the National Science and Technology Council (NSTC), which coordinates science and technology policy across the various federal research and development agencies, and which is chaired by the president.

Trump took more than nineteen months to appoint a presidential science advisor (twice as long as any other president), and left the President’s Council of Advisors on Science and Technology (PCAST) – an advisory group of private sector experts that has provided reports on scientific and technological developments to the president since 1990 – unappointed and unstaffed until 2019. He then stacked it with representatives of private industry, appointing only one academic scientist.

The hopes attached to the science advisor’s return to centrality in devising policy may be based on the unrealistic expectations of a position whose function as ‘house intellectual’ is more mythical than real. Lander assumes a role that has long been demoted, and heads a council that has become isolated and largely silenced on policy matters through successive presidencies.

The office, first occupied by James Killian, was established by President Dwight Eisenhower at the height of the Cold War. Despite the fact that the United States emerged from World War II as the only global military power, the Soviet Union’s successful launch of the Sputnik satellite forced it to question its relative technological advantage. Sputnik handed Killian the keys to the castle, involving him in matters of national importance and providing the technical guidance for significant policy decisions. 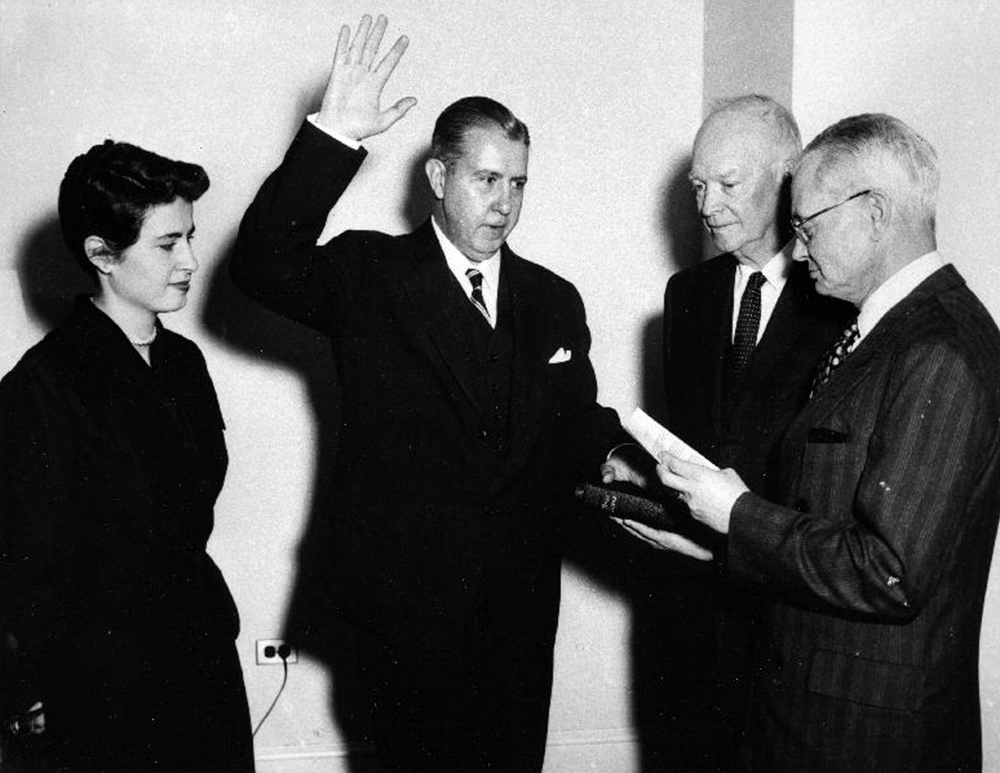 But the glow of that dawn has faded. Donald Hornig, science advisor to Lyndon Johnson, was of the opinion that science is ‘not a thing’ in government. Like economics, it was pervasive but neither an object nor an instrument of policy. And most scientific advisors have been kept resolutely outside the circle of close presidential advisors. It is arguable that federal science policy is nothing more than the management of the science budget. Certainly, the office as re-established by Congress during Gerald Ford’s presidency (President Richard Nixon had terminated it in 1973) had that mandate, and management of the budget has been a key indicator of its success.

The contradiction in the science advisor’s role is that as science permeates every function of government, the advisor is rarely involved in wider White House decision-making. Science issues with technical content are dealt with by agencies – each one with its own science office and advisor, with their own specialisation – and only filter through to the higher levels of government through the budget process, where the science advisor discusses them with other senior White House staff. The nature of modern government, which has become increasingly reliant on an army of experts rather than on the polymath capabilities of any individual, suggests that the science advisor may no longer have a scientific role.

The science advisor’s role is shaped by political priorities, and science advice cannot step out of the political framework. John Marburger, advisor to George W. Bush, recalled that he began every day of his tenure in meetings with senior White House staff discussing current salient matters, and that science was never one of them. What is salient to the president and to senior White House staff is the success of the presidency and securing re-election. Nixon wanted (but did not succeed in getting) the Apollo 16 and 17 missions rescheduled, concerned that an accident would harm his chances of re-election in 1972. In a different vein, President Jimmy Carter ignored his science advisor’s opinion that a national target of twenty per cent of energy from renewable sources was unachievable, concluding that there were good political reasons for adopting the target, despite the technical evaluation.

In the ice bath of Washington politics, what some consider a war on science others accept as a continuation of politics by other means. The Clinton administration fired a Department of Energy official whose views on climate change differed inconveniently from those of Vice President Al Gore. Administrations on both sides have imposed strict controls over agency scientists’ relationships with the media and Congress. The Obama administration in particular aggressively pursued government employees responsible for leaking classified or confidential information.

The Union of Concerned Scientists (UCS) criticised the George W. Bush administration for, among other things, publishing false information alleging a connection between breast cancer and abortion, and for altering an Environmental Protection Agency (EPA) report on climate change, linking each of these actions to the influence of conservative interest groups seeking industry deregulation. President Clinton’s science advisor John Gibbons dismissed accusations that the Bush administration conducted a systematic ‘war on science’, saying that its actions were more a matter of ‘good government’ than an abuse of science. That is, they fell arguably within the boundaries of legitimate political self-interest.

What sets the Trump administration apart from even the most extreme prior examples is the systematic rejection of scientific method, scientific findings, and the scientific framing of problems. In 2018, the EPA proposed the ‘Strengthening Transparency in Regulatory Science’ rule, requiring it to use only studies whose underlying data was publicly available. The rule mistook transparency for the basis of scientific rigour, and excluded data sets – including clinical trials providing confidentiality to participants by law – that formed the basis of existing and effective environmental regulations. The UCS called the rule ‘a trojan horse … that serve[d] no purpose other than to prevent the EPA from carrying out its mission of protecting public health and the environment’. Another eminent scientist described it as ‘a direct assault on epidemiology’. The rule was finalised on 6 January 2021, as an angry mob stormed the Capitol Building.

While other administrations have been selective in their use of scientific authority, the Trump administration sidelined expertise altogether. The Science Advisory Board, the Clean Air Scientific Advisory Committee, and the Board of Scientific Counselors, on which the EPA relies for scientific advice, have not had their membership renewed, have removed researchers, or have terminated advisory panels undertaking reviews of standards for air pollutants. At the same time, the EPA’s Office of the Science Advisor was terminated by merger into the Office of Research and Development, a move that the UCS has likened to its burial.

The EPA also barred recipients of EPA grants from serving on its advisory committees, purportedly to avoid any appearance of compromise to its independence and objectivity. The effect of this ban was to prevent academic representation and to increase industry’s presence on committees that consequently received advice from representatives of industries with a financial interest in deregulation.

The Lancet has characterised the Trump administration’s actions and policies as demonstrating a ‘disdain for science’ and a promotion of corporate interests over public health and safety. Leaving the EPA in the hands of climate change deniers such as Administrator Scott Pruitt, whose career as attorney general for Oklahoma was funded by the fossil fuel industry, and withdrawing the United States from the Paris Agreement, have increased the likelihood of climate change-induced mortality. Covid-related deaths would have been avoided had Trump consulted and implemented evidence-based public health measures instead of taking a stubbornly and dangerously anti-scientific position, rejecting Covid-19 as a ‘hoax’, saying it would disappear on its own ‘like a miracle’, and promoting the anti-malarial drug hydroxychloroquine for ‘use immediately’ as a treatment, despite there being no evidence of its effectiveness.

While marginalising science does not observe party-political lines, efforts to dismantle the regulatory state underpinned by good science are now a peculiarly conservative objective. The historical politicisation of science is reflected in changes to the relationship between conservative and scientific institutions. In the United States, science has been transformed from a vehicle for the pursuit of national interests – such as Eisenhower’s awakening to the launch of Sputnik and John Kennedy’s single-minded pursuit of the space program – to an ideological fault line, enlisted to support political alternatives. Political identity has become a matter of choosing between a scientific and a competing authority.

What complicates the picture is that while the decline in trust in the scientific community among political conservatives is well established, the attitude towards scientific research itself remains almost universally positive and stable. Pew Research shows that seventy-three per cent of liberal, conservative, and moderate Americans view science and technology as having a positive effect on society, while eighty-two per cent expect greater future benefits. This inconsistency is explained by a conservative ideology that preserves the value of science while dismissing scientific authority perceived as politically biased.

Science remains a crucial battlefield for waging and winning ideological contests. Conservatives have not so much abandoned the scientific field as raised standards against scientific authority. In fact, the federal budget for research and development under the Trump administration represented some of the highest historical spending on scientific enterprise, even after accounting for inflation. Scientifically literate conservatives are selective in their rejection of science, or scientists, that upset religious credos (e.g. creationism) and political positions (climate change), or that seek to explain morality on scientific grounds. The Trump administration did not conduct a war on science as such but on regulatory science – the synthesis and application of science to social problems by regulatory agencies.

Science advisor Lander comes to the role favoured by the potent combination of presidential collegiality and historical crisis. Killian had Sputnik and a superpower’s ideological slumber. Lander has a global pandemic and its disproportionate effect on the United States. Biden has signed executive orders to reverse many of the Trump and earlier administrations’ worst actions, directing agencies to base decisions on science and data and protecting agency scientists from political interference, and he has prioritised the pandemic and climate change as targets for scientific responses. Long-term structural change will require legislation, the reorientation of political settings, and a reinvention of the public meaning of science. History, however, shows that the affection of government for science is at its pleasure: Killian’s swearing-in ceremony was ‘unusually brief’ – the president (like others before and after him) had a golf game to attend.

Claudio Bozzi is a barrister practising in commercial matters with a special interest in shipping and maritime law, and the legal implications of technical innovation, and a Lecturer at Deakin University where he teaches the rules of proceedings, equity, and trusts.