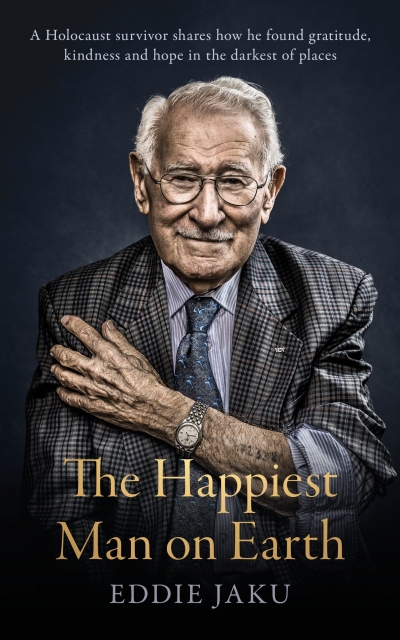 The Happiest Man on Earth

Eddie Jaku looks out benevolently from his memoir’s cover, signs of living etched across his face. The dapper centenarian displays another mark, one distinctly at odds with his beatific expression and the title’s claim: the tattoo on his forearm from Auschwitz II-Birkenau. Less discernible is the badge affixed to his lapel bearing the Hebrew word zachor; ‘remember’. The Happiest Man on Earth blazes with the pursuit of memory, of bearing witness, but it is also determinedly oriented towards the future, its dedication inscribed to ‘future generations’.

As I read Jaku’s book, the same sensation struck me as when I read Hans Keilson’s memoir There Stands My House (2011): it is perhaps best described as the privilege of experiencing someone’s remarkable company and being entrusted with his story. Keilson was also a German Jew who survived the Holocaust, but one who did so by hiding. Jaku’s experience was one of hiding, betrayals, internment, the crushing brutality of Auschwitz and the Buchenwald concentration camp (twice), the death march, and myriad other horrors. Following the Shoah, the lives of both men are formed out of the memory of their parents, shadowed by their murder and also influenced by their embodiment of compassion. Jaku and Keilson cleave to a belief in humanity as a resounding reply to hate.

Writer Liam Pieper has deftly allowed Jaku’s singular speaking voice to emerge unfiltered. Jaku ushers the reader to go with him as he extends his fellowship, each word resolutely countering the darkness of oblivion and intolerance. The book is an extension of his almost four decades-long volunteering at the Sydney Jewish Museum and of his 2019 TED talk.

The miraculous seems a concept at odds with the telling of a narrative so mired in suffering, but the word ‘miracle’ often nudges its way into Holocaust survivors’ accounts, as it does here. Jaku addresses survivor guilt and the fraught existence of a survivor, asserting that those who held on to their belief in an inherently evil world did not wholly survive their experience. His experience as a refugee and migrant reverberates in our contemporary world.

In The Happiest Man on Earth, Jaku continues to ask questions for which there are no answers. He acknowledges suffering but resists being defined by it, adhering instead to his philosophy of choosing a radical form of humanity, a resistance both potent and infectious.

The Happiest Man on Earth