Between the Fish and the Mudcake by Andrew Riemer

I was tempted to do a wicked thing when writing about Between the Fish and the Mud Cake: to take its subjects and describe my experiences with them. So I would tell you all about my lunch with Georges Perec at the French Embassy in Canberra. What he said, and I said, and the ambassador said, and what I made of it all. The book mentions touring with Carmel Bird; I could describe my friendship with her. But Andrew Riemer is not that sort of reviewer, and his book is much too interesting in itself to be one-upped like that.

In the notes that I made as I began reading the book, I noted that its prose was plain, workmanlike, efficient. By the time I reached the point where Riemer himself tells us something like this, I was already qualifying this judgement. Like Othello, he suggests he is delivering ‘a round unvarnished tale’, and like Othello he is doing nothing of the sort. The prose isn’t the kind that you’d read to find out where the English language is going in the hands of those who are forging it anew, but it is an instrument of clarity for dealing with the important themes, in fact mainly one large theme, that structure the book. In a series of elegantly constructed essays, he examines the large questions of art and morality.

Central to this theme is a visit to Bayreuth, which is overlaid with accounts of past and future visits, of the company he meets there, of the history of the Wagner family and its liaisons with Nazism, of the role of Jews in enjoying and supporting the music, and what he later calls ‘the implication of Wagner in the great European outrage of the century’. He meets Judah Waten at dinner after the opera, who tells him how he always waits in the lavatories for a cubicle to be free. ‘In Bayreuth of all places,’ he says, ‘it doesn’t do to be circumcised.’

Through all this Riemer weaves the big questions. The age-old inevitable dilemma of moral responsibility. How long should guilt be retained? How much can humanity bear to remember? Travelling with several Australians and a French writer, he wonders whether harsher lives would have given them better subject matter. What if he had stayed in Budapest? Miroslav Holub is the other member of the party; he stayed. On the other hand, Australia is one of the few countries in the world where you can look at The Ring as ‘nothing other than an enthralling musical and dramatic fable’. And that is how it should be.

Some of these ideas make you want to be having a conversation with Andrew Riemer. To ask him whether he thinks it is necessary to have suffered to be a writer. Especially in a society which tends to think that you don’t even have to have lived, let alone had some bad times.

Another subject is the apparently successful insiders, the middle-class cultivated prosperous citizens who, in old societies, know absolutely how to live, what schools, what brothels, what cake-shops, what cemeteries to patronise. And yet when it comes to the point, they are outsiders. Finally, they do not belong. He discovers the same desperate awareness of hierarchies in contemporary Buenos Aires, where people behave as his family did in the 1930s, holding on with a kind of manic gaiety to the illusion that life is ruled by chance, not malevolent fate, that the future is undetermined, not inevitable or preordained.

But even more finally, this book is a celebration of a kind of community of outsiders, which, when you consider its members, is no doubt the best place to be; if you can stand it. A community of outsiders must inevitably be a place of paradox and ambiguity, where against the odds or perhaps because of them the human spirit flourishes. The insiders may seem to have the power, but would you want to be one of them?

Riemer is in the habit of examining his own life; it is the ostensible subject matter of his earlier books. This one is a series of essays about certain subjects, Bayreuth, Perec, Patrick White, Shakespeare studies, Borges, and Buenos Aires, but Riemer is the central questing figure in all of them, and we are aware of his mind making connections and exploring what it all might mean. Particularly poignant is his puzzling over the Jewishness of himself and many of his fellows, that they belong to a race, culture, religion that means little to them but which many of them have spent a long time suffering for.

And it is about cities; Riemer is a man who likes to dwell in the great old cities of the world, even if at the same time they inspire hatred as well as love. There is some interesting writing on Vienna in this context. Cities are where civilisation happens, as well as where it is betrayed, and civilisation is the subject of this book. 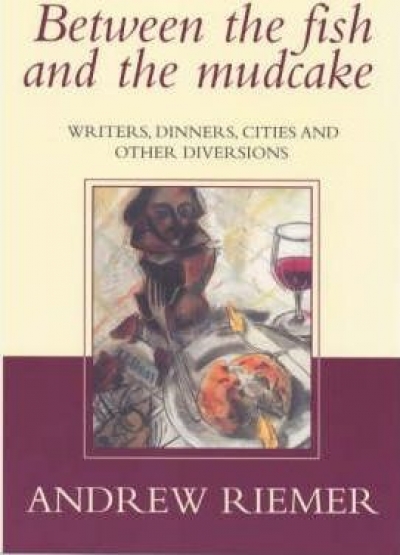 Between the Fish and the Mudcake