To some it may seem solipsistic to be reviewing what is, in effect, a collection of reviews, but when the reviewer in question is as smart as the late Clive James and the subject is as substantial as Philip Larkin (1922–85) this is unlikely to be the case.

Even if Somewhere Becoming Rain were not as good as it is, the very fact of its existence would still be moving. Knowing he is in his final months of life, a poet more famous for almost everything else but who believes his poetry to be his most important achievement pays tribute to a poet whose work outshines, and will continue to outshine, his own. A further dimension is how the dedicated and admiring reviewer of the poet’s work is to defend that poet’s reputation when posthumously published letters reveal Larkin to have been something of a racist and misogynist. It can be difficult to defend the work against such personal shortcomings without seeming to excuse them – or indeed, at worst, to be seen to share them.

It’s unfortunate, then, that James spends so much time defending Larkin’s poetry against those who would seek to belittle it because of its author’s personal failings. James concedes that Larkin’s serial and ongoing deception of several women caused them real pain, but he insists that Larkin appears to have been unfailingly polite to everyone he met, irrespective of race or sex. Significantly, the published poems are resolutely free of any such blemish.

In the second paragraph of Somewhere Becoming Rain, James addresses the point directly with his observation that Larkin ‘was just an ordinary man – too often he thought himself less than that – but behind his show of diffidence ... there was a well-developed sense of duty to his gift ... Would he really have put such ingenuity and effort into hoodwinking the several women who loved him if he had not realised his need for affection was matched by an equally consuming need to be alone?’

Although this compilation only runs to a hundred pages, one of its virtues is its comprehensiveness. Clearly James, like most of us, considers Larkin’s best poems as his main achievement, but he also pays full, if passing, tribute to Larkin’s two early novels (Jill [1946] and A Girl in Winter [1947]), his writing on jazz (All What Jazz [1970]), and his incidental prose (Required Writing [1983]). Through all three areas, James notices the continuing importance of Larkin’s incisive, though not flippant, wit (a matter close to James’s own heart, as we know).

To those few readers who (like this reviewer) have an equal love for both poetry and jazz, being reminded of Larkin’s smart but unfair (even tin-eared) dismissal of modern jazz greats such as Charlie Parker and John Coltrane will undoubtedly be annoying. James makes a persuasive case, however, that Larkin’s real ars poetica is to be found in these now somewhat fugitive pieces praising pre-modern jazz masters (such as Sidney Bechet) while rejecting bebop and what followed. It’s hard to be convinced of Larkin’s insight, though, when he declares that Coltrane ‘sounds like nothing so much as a club bore who has been metamorphosed by a fellow-member of magical powers into a pair of bagpipes’. Coltrane could be relentless at times (especially at the end of his career), but that does seem excessive.

Once or twice the book risks losing focus when James turns aside to a rela- tively peripheral issue, such as whether Larkin was more influenced by Hardy or Yeats (a needless binary), but some of the border regions surveyed (e.g. James’s review of Tom Courtenay’s ‘verbatim’ play about Larkin, Pretending to Be Me [2003]) are definitely of interest.

More central to the life, if not the work, are James’s reviews of the two biographies of Larkin – Andrew Motion’s Philip Larkin: A writer’s life (1993) and James Booth’s Philip Larkin: Life, art and love (2014). Both books provide grist to the seemingly ineluctable ‘Is the work vitiated by the life?’ mill, with James concluding that Booth’s biography has probably been the less damaging of the two.

It’s all an issue that James repeatedly wishes away but to which he cannot help returning. Of course, Larkin’s poetry, if not the man himself, needs to be defended and not allowed to slip from the canon because the writer’s ‘personality’ is now seen to have been less than adequate. It can be hard to ignore the Twitterati these days, especially the academic ones, but too vigorous a defence can, unhappily, begin to seem as if the warrior ‘doth protest too much’.

A nice sense of James’s overall view of Larkin can be had from his five-page poem ‘A Valediction for Philip Larkin’, also included here. In it James regrets, in considerable journalistic detail, that he was on a television safari in Africa when Larkin died. Significantly, the artificiality of the poem’s slightly rough rhyme scheme enabled James to say much that is true about the recently deceased Larkin – and about himself.

It’s hard to sample fairly, but these five lines are a good point to close on: ‘The truth is that you revelled in your craft. / Profound glee charged your sentences with wit. / You beat them into stanza form and laughed: / They didn’t sound like poetry one bit, / Except for being absolutely it.' 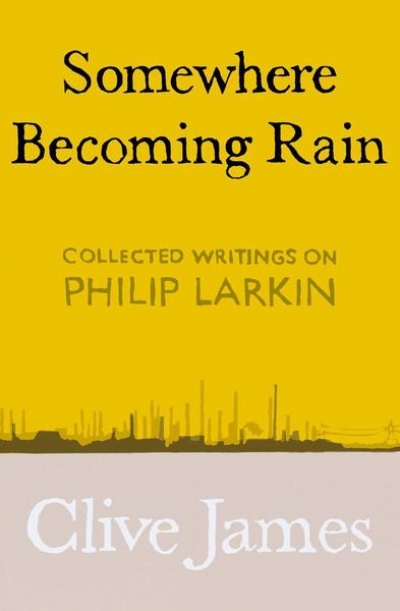