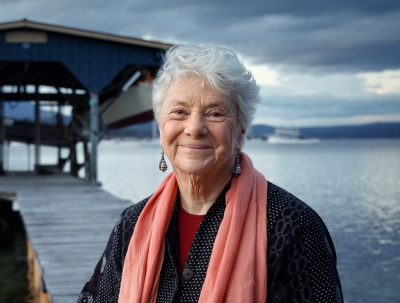 Cassandra Pybus is an independent scholar and the author of twelve books of non-fiction, published in Australia, the United States, Canada, and Britain. Her most recent book is Truganini: Journey through the apocalypse (Allen & Unwin).

Where are you happiest?
Walking through the bush behind my house in Lower Snug provides me with self-transcendence that is true joy. Steadily putting one foot in front of the other empties my mind of agitated, ego-driven narrative and fills it with an entirely different sense of purpose. Walking made me a writer.

What’s your idea of hell?
In an academic conference listening to panels of papers that always run over time.

What do you consider the most specious virtue?
Aristotle considered ambition to be a virtue, and that I think is specious. Ambition is a curse.

And your favourite book?
A toss-up between Gabriel García Márquez’s One Hundred Years of Solitude (1970), Halldór Laxness’s Independent People (1934–35), and Alice Munro’s Lives of Girls and Women (1971).

Name the three people with whom you would most like to dine.
I don’t place much value on dinner-party conversation, but I’d love to have the chance to chat to Harriet Tubman, Sojourner Truth, and Mary Wollstonecraft.

Which word do you most dislike, and which one would you like to see back in public usage?
I don’t have strong opinions about words.

Who is your favourite author?
Probably Alice Munro, but I also love Nadine Gordimer, Jim Crace, and Halldór Laxness.

And your favourite literary hero or heroine?
Rosa from Burger’s Daughter (1979) by Nadine Gordimer.

Which quality do you most admire in a writer?
Unflinching commitment to a moral principle.

Which book influenced you most in your youth?
I am somewhat embarrassed to remember how my youthful self was swept away by the pure solipsism of Elizabeth Smart’s By Grand Central Station I Sat Down and Wept (1945). The truly great book and lasting influence from my youth was William Faulkner’s Absalom, Absalom! (1936).

Name an early literary idol or influence whom you no longer admire – or vice versa.
I hugely admired Paul Auster until I met him at a dinner party in New York and felt the sting of his lofty disdain.

What, if anything, impedes your writing?
One impediment is anxiety that my work will be subject to sustained hostility in the public domain – nowadays especially on social media – which has been quite traumatic for me in the past. Another impediment is the huge cost in both time and money of the exhaustive research necessary to get the story straight.

What do you think of the state of criticism?
After working and publishing in the United States, it seems to me that criticism in Australia is both cautious and perfunctory.

And writers’ festivals?
When I was younger and could tolerate copious amounts of alcohol, I really enjoyed writers’ festivals, especially in Canada, where they are often in stupendous landscapes. I made some lifelong friendships with marvellous writers and enjoyed memorable late-night conversations in the lobbies and bars of swish hotels.

Do you read reviews of your own books?
Of course. Doesn’t everyone?

Are artists valued in our society?
Australia is the envy of my literary friends in the US and the UK for the Australia Council grants, as well as for a raft of literary prizes, not to mention all those writers’ festivals.

What are you working on now?
I am researching a book about stealing Aboriginal remains as scientific trophies, to be the third in a trilogy on colonial genocide. It is a tough assignment, but a moral imperative for me.