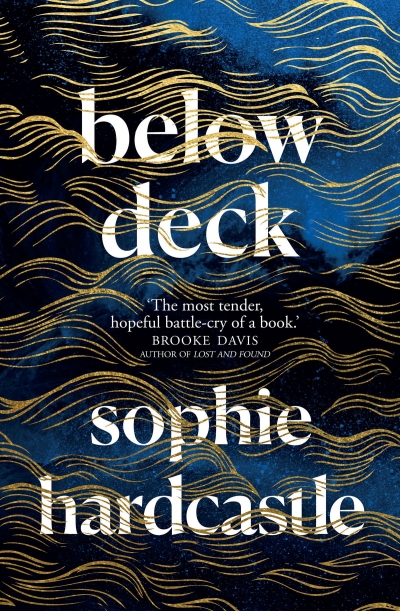 Below Deck is a stunning literary novel. This is a poetic work that can be read aloud just as easily as it can be read in silence. Sophie Hardcastle wrote Below Deck in 2018 when she was a Provost’s Scholar in English Literature at Worcester College at the University of Oxford. As she reveals in the acknowledgments, she read a draft aloud to her professor, an experience that no doubt consolidated the flow of her prose.

Oli, the protagonist, is a sailor and an artist. Her synaesthesia means that she hears sounds and feels emotions in colour. Hardcastle’s lyrical command of language enables the reader to experience Oli’s world in vivid colour too. Oli is a twenty-something woman whose world is damaged by men – her father, her boyfriend, the all-male crew. The sense of maleness is omnipresent in the novel – how they behave, what they assume, the way they judge others. Their presence leeches the very colour from Oli’s world. But Below Deck is more nuanced than simply pitting maleness against femaleness. There are compassionate men, including the irrepressible Mac and the everyman Hugo.

At its heart – and there is heart to this novel, indeed more than most – Below Deck explores what it is to be female. This is a work for anyone who has felt the sting of misogyny or the consequences of assault. Oli lives those experiences, questions them, crumbles under their weight, and rebuilds herself. All the while, Hardcastle’s lightness of touch means that none of this is didactic. Oli simply is.

The novel is replete with symbolism but can also be brutally frank at times. This is, after all, a work that opens with ‘at sea, no one can hear you scream’. Oli travels to the Southern Ocean, an experience that allows her to begin to recover. This healing is accompanied by a burst of creativity; she begins to see the world in colours she has never experienced before. (Hardcastle was an artist-in-residence in Antarctica in 2017, an experience that doubtless informed the novel.)

This is Hardcastle’s first novel, although she has previously published her memoir of mental illness, Running Like China (2015), and the Young Adult novel Breathing Under Water (2016).