In the driver’s seat of our Toyota Corolla on the way to Burleigh Heads. The family’s playing a trivia quiz where you have to answer deep-cut questions about a particular family member sitting in the car, and then my youngest daughter says some gag weirdly beyond her years and we all laugh our heads off, and then my wife calls it all for what it is. ‘M.O.P.H.!’ she hollers. Cheesy as hell but that stands for, ‘Moment of Pure Happiness’, and that’s code for, ‘Life ain’t ever gettin’ better than this so recognise it, knuckleheads!’

The driver’s seat of our Toyota Corolla driving home from Burleigh Heads.

Contentment. I get my teeth on that carrot and I take a good bite, but then it only grows in my hand and it pulls away again from my grasp. Silly carrot. 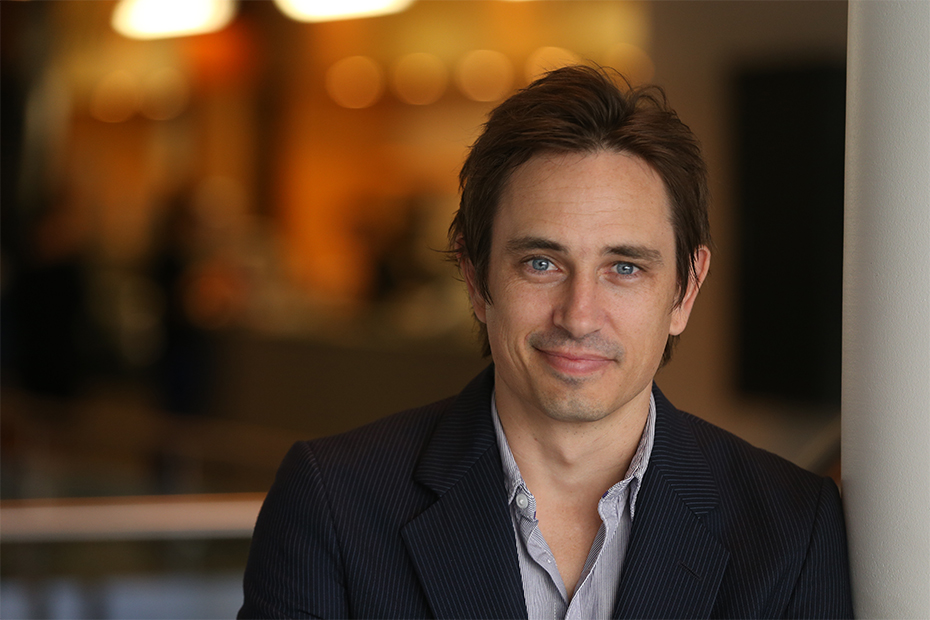 Back to the Future. The deepest, most wondrous exploration of courage and inherited trauma disguised as the greatest popcorn movie ever made. There is a Marty McFly residing in all men, and the world becomes a better place when we find him.

The Grapes of Wrath by John Steinbeck. I have spent two decades as a journalist writing stories pretty much inspired by that book. I truly believe that the last two pages are the reason why I have kids and get to drive to Burleigh Heads with them. Those pages turned me into the kind of bloke my wife wanted to be around.

My place. Chilli mud crab pasta for dinner. Eddie Vedder’s placing my vinyl copy of Vitalogy on the record player. Jodie Foster sips chianti at my kitchen bench and is reminded of a Silence of the Lambs story she’s never told anyone but wants to tell me. And my dear departed dad, Noel, has a XXXX in his hand by the record player, telling Vedder why The Beatles are more musically accomplished than The Rolling Stones but the Stones are better to root to.

‘Awesome’ I dislike, and ‘awesome’ I’d like back. That is, used more in relation to things like the view of the Earth from the Moon and Aretha Franklin’s voice, and less in relation to Kylie Jenner’s range of lipsticks.

If I’m lobbing Cannery Row and Of Mice and Men in with Grapes of Wrath, then I’ve gotta say Steinbeck, purely on an inspiration-per-page ratio. Awesome writer.

Enthusiasm. I’m convinced it’s the single most beneficial quality to possess in any profession. Maybe in life, too.

E.B White’s Charlotte’s Web showed a wide-eyed young Rugby League lover that the world is one great infinitely expanding glass prism with infinite points of view to look through.

Like all forms of journalism, it’s thrilling and essential and informative when it’s done with heart, honesty, and empathy.

Love them. I’m the buffoon with the flailing arms thanking every last booklover who dropped some hard-earned money, cleared the diary for an hour, hopped in their car, paid for parking, found the right tent on the map, and came to hear me talk about the thing that makes my legs move.

Sure. Send them to my mum. Read them out to my wife. Whole bit. Totally and utterly psychologically destructive, but it never felt as though reading reviews of my own work was ever going to be in my destiny so nothing matters but getting to that white screen every day and painting it black. Whatever comes next is gravy.

Bankers, lawyers, and Kim Kardashian are still winning that war, but at dawn look to the east, or up to Brisbane, and you’ll see Bri Lee and Ellen van Neerven and Ben Hobson and Joel Rea and Last Dinosaurs. They only just picked up their swords.

Dead set finished writing my second novel only yesterday. Just about to start on another significant writing gig, my wife’s birthday card.

Trent Dalton is a staff writer for the Weekend Australian Magazine and a two-time winner of a Walkley Award for Excellence in Journalism. His début novel, Boy Swallows Universe (HarperCollins, 2018), has won several awards, including the UTS Glenda Adams Award for New Writing at the 2019 NSW Premier’s Literary Awards. Boy Swallows Universe will be published across thirty-four English language and translation territories.