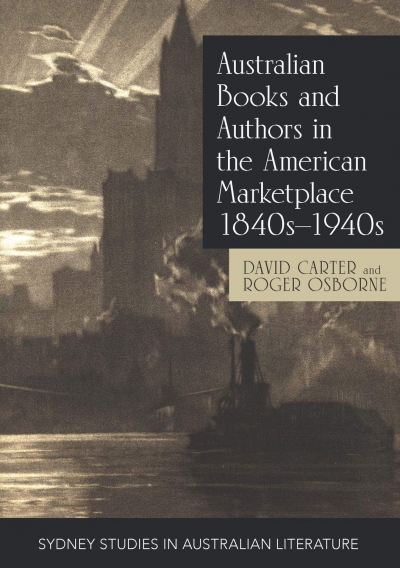 Australian Books and Authors in the American Marketplace 1840s–1940s

by David Carter and Roger Osborne

While working in the London advertising world in the late 1960s, Peter Carey sent his stories to a leading New York literary magazine, Evergreen Review, only to be unimpressed by another rejection. He brooded later: there was ‘something glorious and futile in attempting to make Australian literature when, as everybody in London knew, [it] did not exist’. In Australian Books and Authors in the American Marketplace 1840s–1940s, David Carter and Roger Osborne show that the metropolitan triangle of Melbourne/Sydney–London–New York had been a publishing circuit for at least a century before Carey’s transatlantic, or, as it is appositely termed here, ‘transnodal’, misadventure. The book’s prosaic title predicts its consistently empirical approach and macroscopic canvas of the production, circulation, and afterlives of Australian literary commodity in the United States.

Literary markets are capricious beasts, with complex set of behaviours and mutations of their own. Add to that competing international trade rules and domestic tax laws, and what you get is a history as messy as any. There is no upward master narrative here either; ‘no evolutionary pattern’ of Australian books or authors crystallises over the period under discussion. The nine chapters cohere roughly around the productive notion of ‘genre networks’ to explore the intersections of authorial practice, editorial and promotional mechanisms, and consumer culture. In most cases, this was modulated through transactions between British ‘traditional markets’ (Great Britain, its colonies and dominions including Australia) and the US territory (the Americas and the Philippines). In the absence of a formal copyright system, the legal framework got off to a patchy start. As the only regulatory measure against literary piracy, ‘trade courtesy’ allowed the first US publisher that printed a book to gain exclusive rights to the title or to lay claim to the respective author’s subsequent works. Harper, for instance, released Marcus Clarke’s His Natural Life in 1876 after heavily bowdlerising the London-based Bentley & Sons’ three-volume version, unbeknown to the author. Upon receiving a flat fee of £15 from the United States, Clarke jibbed, ‘I suppose it represents something in dollars – Harper’s conscience, perhaps!’

Australian Books and Authors in the American Marketplace 1840s–1940s

by David Carter and Roger Osborne