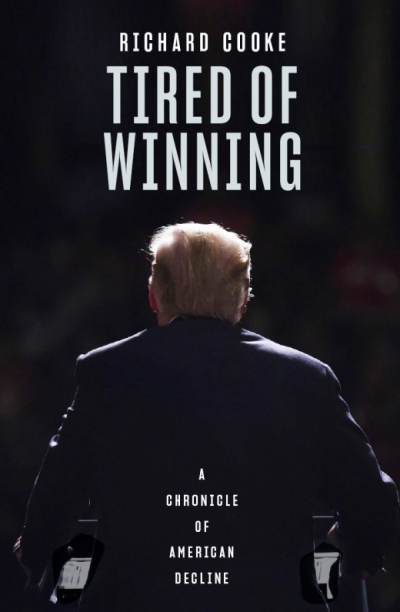 Tired of Winning: A chronicle of American decline

Tired of Winning: A chronicle of American decline by journalist and essayist Richard Cooke begins with the shock of Donald Trump’s election on 8 November 2016. In New York’s Lincoln Square, thousands of Clinton supporters were ‘stunned into silence’ while ‘a posse of drunk frat boys in MAGA caps announced themselves loudly’. Yet, as the author soon realised: ‘This was not the moment “everything changed” at all. It was a culmination, rather than a beginning, and the change had started months – maybe even years – before. It was the product of other people, and other places.’

That realisation led Cooke to return to the United States in the lead-up to the 2018 midterm Congressional elections, ‘determined to experience as much of the present state of the United States as [he] could, and to capture that experience on behalf of those similarly perplexed’. The result is a series of sketches, ranging across present-day America and observing life under President Trump.

One of the threads that runs through Cooke’s account is the social consequences of economic decay and inequality. In Appalachia, Cooke visits communities trapped in cycles of opioid addiction. He writes movingly, ‘opioids have hit hardest in the parts of the United States that are spare and wooded, and the country does not speak to itself in the voices of these places’. As a pastor in West Virginia tells the author: ‘The coal and steel was taken away and, to some extent, the ease to sell dope was introduced around the same time.’ Cooke also reveals a heartbreaking correlation: a psychological test called the Adverse Childhood Experiences Study ‘predicts addiction and chronic disease with a subtlety and precision that seems almost cruel’. One of its questions: ‘Did you often or very often feel that … you didn’t have enough to eat, had to wear dirty clothes, and had no one to protect you?’

Tired of Winning: A chronicle of American decline