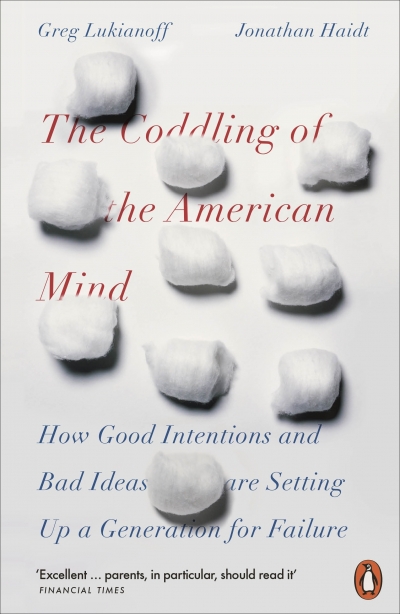 The Coddling of the American Mind

by Greg Lukianoff and Jonathan Haidt

In 1987, Allan Bloom published his best-selling book, The Closing of the American Mind. The American mind must have remained sufficiently open to allow it, three decades hence, to be coddled. The mind that is being closed or coddled is, in the first instance, the young adult mind in its formative stage – at university. Cultural anxiety about what is going on at universities is nothing new. The latest manifestation is The Coddling of the American Mind. Developing their thesis first articulated in an article in The Atlantic, the authors, Greg Lukianoff, a lawyer focusing on the First Amendment and the president of the Foundation for Individual Rights in Education (‘FIRE’), and Jonathan Haidt, a social psychologist, set out to analyse the particular cultural moment in which American universities find themselves.

Lukianoff and Haidt identify the three ‘Great Untruths’: ‘The Untruth of Fragility: What Doesn’t Kill You Makes You Weaker’; ‘The Untruth of Emotional Reasoning: Always Trust Your Feelings’; and ‘The Untruth of Us Versus Them: Life is a Battle Between Good People and Bad People’. These ‘untruths’, they argue, have been used in parenting and education over the last two to three decades, with the consequences that iGen (or Generation Z) – people born from 1995 onwards, the first generation of people who have grown up in a world in which the internet has been pervasive from the time they were conscious – have internalised them. For Lukianoff and Haidt, this generational shift explains why the problems identified on college campuses have become so prominent and acute (from 2013 onwards, members of Generation Z started entering universities). The authors then proceed to document what they consider to be the evidence for the problem of coddling young minds at university: trigger warnings, safe spaces, micro-aggressions, call-out culture, no platforming, and identity politics. Having explored these manifestations of the problem on university campuses, they then seek to identify the underlying reasons for them. The causes of this phenomenon are not limited to universities, nor could they be. Universities are part of society, so understandably what occurs in society at large is reflected in universities. Lukianoff and Haidt point out that political polarisation on college campuses unsurprisingly reflects political polarisation in the United States more generally. They note that this polarisation informs and reinforces increasing self-segregation: people living in communities of the like-minded, with fewer interactions with those of different views. This is facilitated by the collapse of mass experience, most notably in relation to the profound changes to media and technology. Within a generation, three national commercial television networks have been eclipsed by social media platforms, allowing for individualised content consumption and creation.

The Coddling of the American Mind

by Greg Lukianoff and Jonathan Haidt