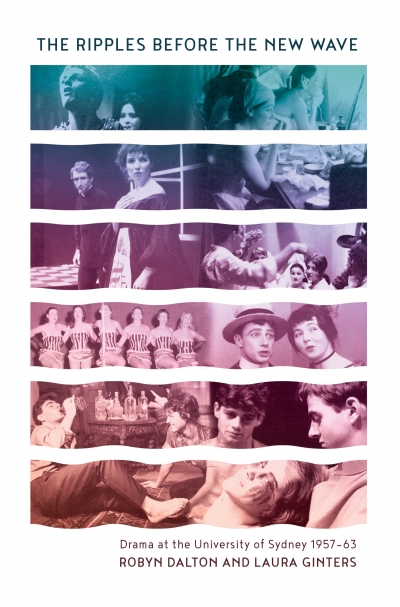 The Ripples Before the New Wave: Drama at the University Of Sydney 1957–1963

by Robyn Dalton and Laura Ginters

People who were university students at a particular time often like to regard those years as exceptional, a perspective which, embellished by nostalgia, memoirs, and media hype, can take on mythic proportions. A case in point is the concurrence of people and talent that led to a high point in student theatre at the University of Sydney during the late 1950s and early 1960s.

In a theatre context, ‘New Wave’ describes the perceived beginning, at the end of the 1960s, of modern Australian drama. Theatre historians like Michelle Arrow and Geoffrey Milne have pointed out that the notion that this was where it all started ignores the work of playwrights from the 1920s onwards, and considers the success of Ray Lawler’s Summer of the Seventeenth Doll in 1955 a virtual anomaly before 1970.

Robyn Dalton and Laura Ginters suggest that historians have also underestimated the flourish at Sydney University and its ramifications, in later collaborations, of those who were involved. For them it is the ‘ripples’ that preceded the Wave: small perhaps, but influential in what followed. They avoid claims of a golden age. As Clive James wryly remembered forty years later, ‘it looks like the biggest concentration of talent in the universe but it was just an historical accident’. That some of those involved later became known nationally (the Johns Bell, Gaden, and Tasker, Richard Wherrett, Leo Schofield, Bob Ellis) and internationally (Germaine Greer, Clive James himself, Robert Hughes, Les Murray, Bruce Beresford, and Madeleine St John) no doubt added retrospective lustre.

The Ripples Before the New Wave: Drama at the University Of Sydney 1957–1963

by Robyn Dalton and Laura Ginters