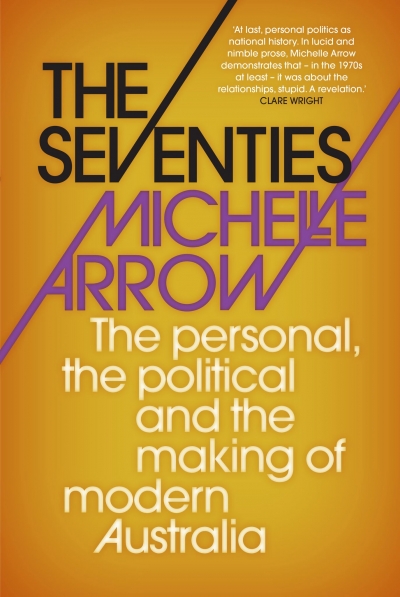 The Seventies: The personal, the political and the making of modern Australia

Abortion was big news in Australia in 1973. In May, a bill was introduced to Federal Parliament that, if passed, would have allowed women in the ACT to terminate a pregnancy in the first trimester. So intense was public interest in this issue that one MP suggested televising the debate. On the day of the vote, activists inside the Women’s Embassy – a tent protest clearly inspired by the Aboriginal Tent Embassy erected a year earlier on the same lawns across from Parliament House – blasted Helen Reddy’s feminist anthem ‘I Am Woman’ on high rotation. No matter how loud they got, the women and their tent were outnumbered and outsized by some two thousand Right to Life protesters and their gigantic marquee. Despite the fact that the majority of Australians supported a relaxation of abortion law, the bill was easily defeated, by ninety-eight votes to twenty-three. Both major parties had given their MPs – all of them men – a conscience vote, an enduring practice which has meant that women’s reproductive rights continue to be debated as a moral question rather than one of personal autonomy or public health.

What happened next – the Royal Commission on Human Relationships, initially interpreted by women’s liberationists as a ‘consolation prize’ for a lack of action of abortion reform – is engagingly explored in Michelle Arrow’s compelling new history The Seventies: The personal, the political and the making of modern Australia. Without making grand claims for the tangible outcomes of the Commission – for the Fraser government barely addressed the recommendations when they were finally released – Arrow aptly describes the Royal Commission as ‘an extraordinary political event’ in Australian history. Thousands of Australians of all kinds took advantage of various opportunities to tell their personal stories, in public hearings, interviews, and written submissions. They talked about ‘abortion, sex education, marriage, parenthood and relationships’, as well as family violence, poverty, sexual assault, and much more. The sharing of these hitherto private experiences in a government-initiated forum, Arrow suggests, saw the animating principle of women’s liberation – the personal is political – ‘performed on the national stage’.

The Seventies: The personal, the political and the making of modern Australia