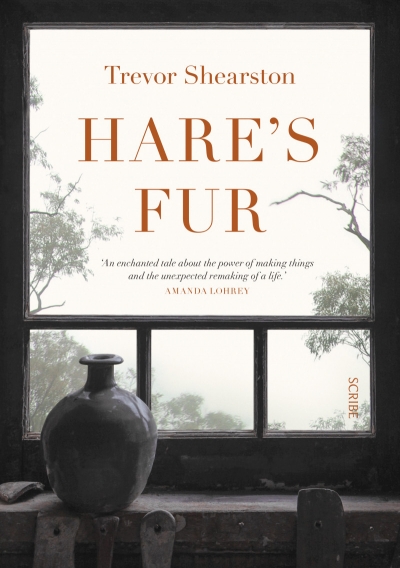 One morning, seeking basalt for glazes at a nearby creek, Russell discovers three siblings living in a cave: two young children, Todd and Emma, and their teenage sister, Jade. Moved to act, he brings them food, offers them help. At first hesitant, they come to trust him, and a tentative relationship begins.

Hare’s Fur is a tale of convalescence, a restrained, moving story about how we discover new meaning in the wake of anguish. While Trevor Shearston’s prior fiction has largely explored the fictionalisation of historical figures – Jack Emanuel’s assassination in A Straight Young Back (2000), Italian explorer Luigi D’Albertis in Dead Birds (2007), the bushranger Ben Hall in Game (2013) – Hare’s Fur proves the writer’s talent beyond historical saga. Katoomba, nestled in the heart of the Blue Mountains, also provides a vivid backdrop. Privy to its ‘tea-trees, acacias, and hakeas’, its ‘grevillea laurifolia, dillwynia, and hibbertia’, Shearston is clearly at home; it’s no surprise that he lives there.

This serenity is occasionally disrupted by superfluous touches – Russell’s internal, italicised musings, for one, tend to get in the way. We are also rationed only fragments of the lives of Adele and Michael – in one beautiful passage, Russell watches Todd approach a wallaby, recalling Michael once doing the same – and we are left wanting more.

Overall, Hare’s Fur is about the inevitable reconfiguring of a life. It shows us that, like Kintsugi, the Japanese art of repairing broken pottery with seams of gold, we too can mend ourselves, we too can reconnect our pieces.