Call Them by Their True Names: American crises (and essays) by Rebecca Solnit

On the first page of her book Hope in the Dark (2004), Rebecca Solnit quotes from Virginia Woolf’s diary: ‘The future is dark, which is on the whole, the best thing the future can be, I think.’ Such optimism is, Solnit acknowledges, surprising. But it’s a persistent theme in her work and it finds clear articulation in her most recent essay collection, Call Them by Their True Names.

Solnit is a complex writer and thinker, at once a cultural historian, an avant-garde activist, and a feminist whose work permeates the mainstream – from a Beyoncé hat-tip to the term ‘mansplaining’. Reducing that complexity is difficult and perhaps unhelpful given the rationale of the essays in question. In Men Explain Things to Me (2014), Solnit touches again on Woolf’s diary-statement and suggests that, ‘It’s the job of writers and explorers to see more … to go into the dark with their eyes open.’ This requires a courage that, in Call Them by Their True Names, is embodied in Solnit’s commitment to precision, even as she delights in the indefinite – she sees words as ‘gestures in a ballet’ instead of ‘pieces in a game of checkers’.

In the essay titled ‘In Praise of Indirect Consequences’, Solnit describes what she calls ‘collateral benefit’. A case in point is the indirect transfer of non-violent resistance tactics from anti-slavery campaigners to suffragettes, Gandhi to Martin Luther King Jr, and then to protesters at Occupy, Standing Rock, and for #MeToo. Each action of resistance, she argues – even if it does not succeed in its immediate goal – has repercussions. Through an awareness of the winding paths of historical cause and effect – akin to a metaphysical game of bowling ‘shrouded in mists and unfolding over decades’ – hope can be maintained. She makes a compelling case. And an inspiring one: ‘Hope is a belief that what we do might matter … that the future is not yet written. It’s an informed, astute open-mindedness about what can happen and what role we might play in it.’ This open-mindedness depends on the above-mentioned duality. Solnit excels in the kind of nuance required to write it.

The book’s title speaks to Solnit’s reverence for clarity and precision. If things are called by their true names, it might be possible to resist some of the ravages of this post-truth era. Accurate language actively eschews ‘the disintegration of meaning’. It’s refreshing, in this context, to see Solnit reverse the charge of relativism onto the right: nuance doesn’t mean avoiding an answer, it means searching for the correct one – even if that search is occasionally unsuccessful. In the essays, Solnit’s insistence on context and depth proves this point; the case studies she describes – death row inmates, police shootings, voter disenfranchisement, and more – are deep explorations of cause and effect. Linking causes also draws attention to the forces behind them, one particular target being Donald Trump and the United States he symbolises. Here, Solnit writes with a glint in her eye, entirely unafraid to call a spade a president, and the frequent takedowns of ‘45’ are glorious.

Her gaze is not a blinkered one. Repeated pleas for nuance cover the gamut, from libertarian right-leaners to the more cynical reaches of the left. These essays demand activism and urge agency on all sides of the political spectrum. Solnit makes the point that complexity can be comprehended only by engaging with allies, and she suggests that, ‘Conversation … is a means of accomplishing many subtle and indirect things.’ This is not a plea for echo-chamber politicking, but a call to give the arguments for progressivism more depth; to thicken the bonds between friends, to solidify foundations, and to open up a way into a clearer kind of discourse. These essays are part of that process, one example being ‘Death by Gentrification’.

The city of San Francisco – Solnit’s home and a place of vast and intricate diversity under siege from the Silicon Valley on its doorstep – is a case study for her argument that gentrification, impelled by neoliberalism and capitalism, tears apart the fabric of cities already under strain. The link between police brutality and this kind of stress shows what happens when the less tangible aspects of a place are removed. This has resonance in the Australian context, perhaps because of the way in which Solnit argues that actions and events work, replete with unintended consequences. This complex concatenation builds resonance for the Australian reader: the book presents parallels to the treatment of Julia Gillard and Julia Banks, to the dismissal of refugees on Manus Island and Nauru, to debates around what should stay in or out of the ground, and to continuing colonisation. ‘The Monument Wars’ demonstrates this last parallelism, arguing that erasure of ‘all signs of the ugliness of [a] country’s past ... would be a landscape lobotomy’. The essay calls for accuracy and honesty in addressing the past; it is a reminder that ‘our emerging perspective is hardly the final realisation of inclusion or equality’.

Call Them by Their True Names doesn’t have the overall consistency of a work designed to be one thing: ideas are repeated and specific thoughts reiterated. But Solnit writes with verve and candour, in lyrical prose that reinforces her claims around interconnectedness and vitality. The book is as difficult to pin down as the rest of her oeuvre. But that, perhaps, is part of her method of emphasising entangled connections – to the visible and invisible past, and to the lines of influence that stretch into a dark and possibility-rich future.

Daniel Juckes is a writer from Perth, Western Australia. He is a Lecturer in Creative Writing at UWA, Associate Editor at Westerly magazine, and holds a PhD in Creative Writing from Curtin University. His creative and critical work has been published in journals such as Axon, Life Writing, M/C Journal, TEXT, and Westerly; his research investigates seamlessness in prose style and the potential of objects in stories about the past. 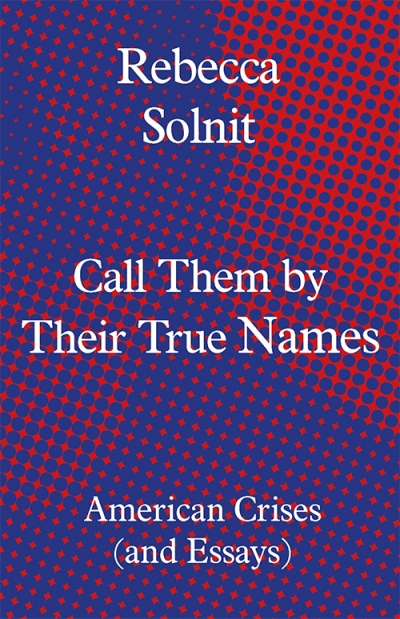 Call Them by Their True Names: American crises (and essays)