Sylvia Plath wrote her last letter to the American psychiatrist Dr Ruth Beuscher a week prior to her suicide on 11 February 1963. In it, Plath castigates herself for being guilty of ‘Idolatrous love’, a concept she drew from psychoanalyst and philosopher Erich Fromm’s The Art of Loving. ‘I lost myself in Ted instead of finding myself,’ Plath writes, identifying the subsumption of her ego into her failed marriage at the heart of her unhappiness. The letter’s tone is self-lacerating – Plath diagnoses herself as ‘very narcissistic’, lacking ‘a mature identity’, and in the grip of a ‘ghastly defeatist cycle’ – and distraught, citing a ‘fear & vision of the worst’. It closes with a portentous image of her domestic life, made terrible with hindsight: ‘Now the babies are crying, I must take them out to tea,’ Plath wrote. A week later, she killed herself.

The letters from Plath to Beuscher – fourteen in all – offer an unvarnished insight into Plath’s psyche during the tumultuous end of her marriage to the poet Ted Hughes and the months leading up to her suicide. The correspondence is discomfortingly intimate; while no longer Beuscher’s patient, Plath made repeated entreaties for Beuscher to bill her for the letters, and her disclosures were clearly made within the confines of an implicit doctor–patient confidentiality. Plath had known Beuscher for a decade by the time she wrote her final letter. Beuscher first treated her in McLean Hospital in 1953, after the breakdown that formed the basis of her semi-autobiographical novel, The Bell Jar (1963); she subsequently met with Plath for weekly therapy sessions early in her marriage to Hughes when the couple lived in Boston. After Plath and Hughes moved to England, Beuscher became a trusted confidant by correspondence – one to whom Plath wrote in increasing desperation after Hughes’s infidelity and ‘desertion’ of his young family. 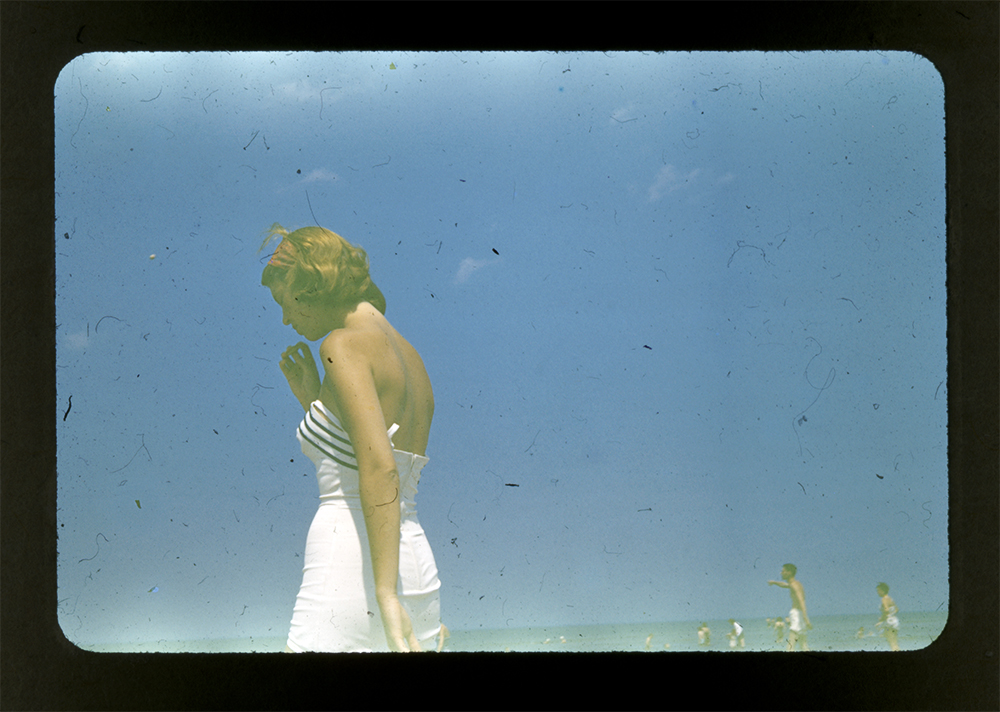 With the permission of her daughter, Frieda Hughes, Plath’s letters to Beuscher are published for the first time, in the superbly edited, exhaustive The Letters of Sylvia Plath Volume 2: 1956–1963. The existence of the letters – some 18,000 words in total – was revealed dramatically in 2017 when a book dealer listed them for sale alongside legible photographs that reverberated through the literary world. The letters offer explosive details of hitherto unknown episodes in Plath and Hughes’s marriage, including Plath’s disclosure that Hughes ‘beat [her] up physically’ a few days prior to a miscarriage in 1961, that Hughes taunted Plath about suicide – ‘he told me openly he wished me dead … I was brainless, hideous, had all sorts of flaws in making love’ – and Plath’s observation that Hughes was antipathetic towards his son, Nicholas, calling him ‘ugly’ and a ‘usurper’.

Because Hughes destroyed Plath’s final journal, ostensibly to protect the couple’s children from its contents, the Beuscher letters offer the frankest record of Plath’s thoughts in the months before her suicide. They have also prompted a predictable rehashing of arguments that have been prosecuted with varying intensity since their peak in the 1970s, about Hughes’s culpability in Plath’s death – an argument that Frieda Hughes dismisses in her foreword: ‘while my father does not come out of these letters as a saint, neither does my mother’. Inevitably, the more sensational details of the Beuscher letters will ensure that the end of Plath’s life will dominate the reception of her final letters, too. Yet what compels in this volume is not only the portrait it offers of Plath’s descent, but also its view of her literary ascent, her marriage to Hughes, and the astonishing efficiency and energy with which the couple manifested their extraordinary literary careers. 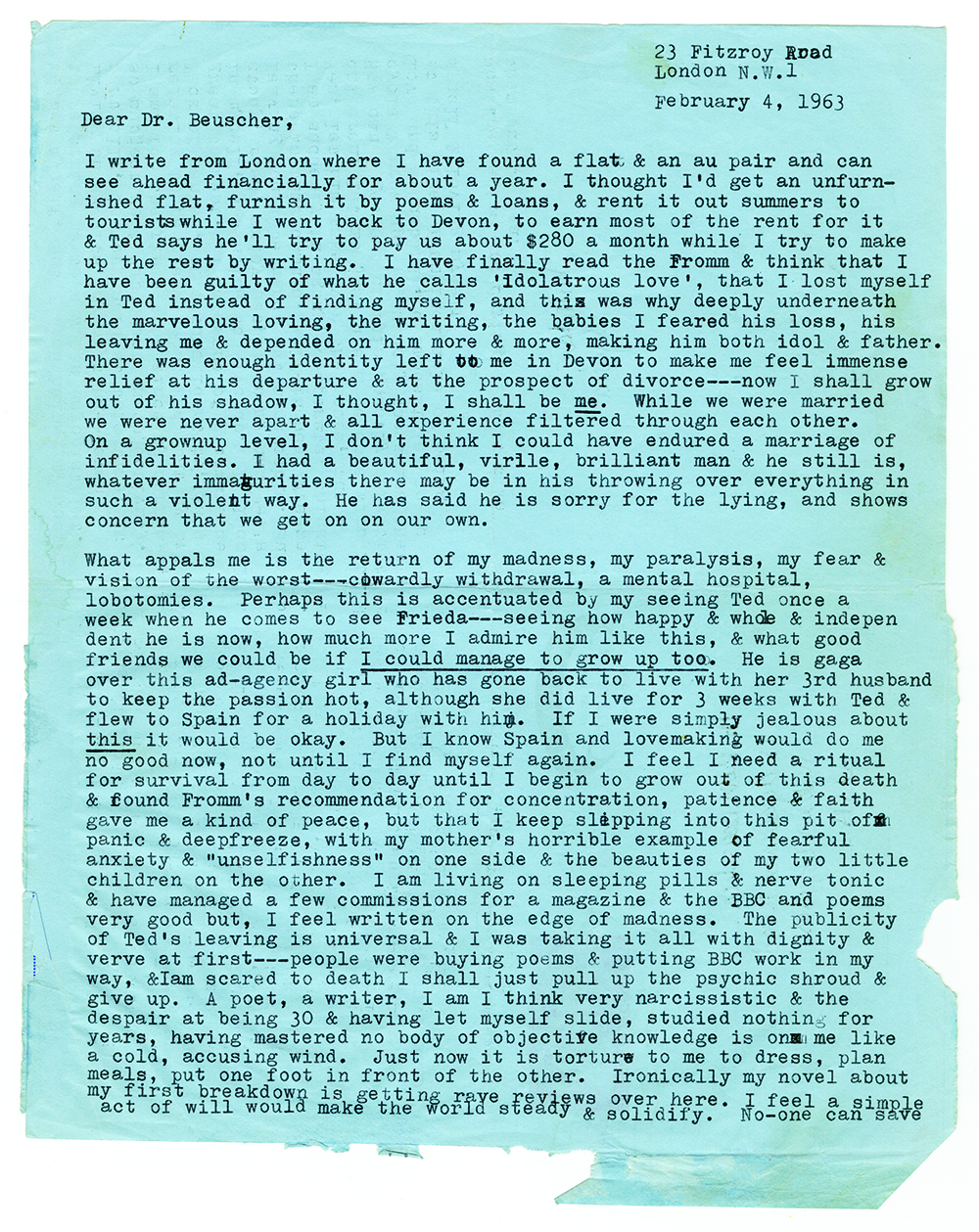 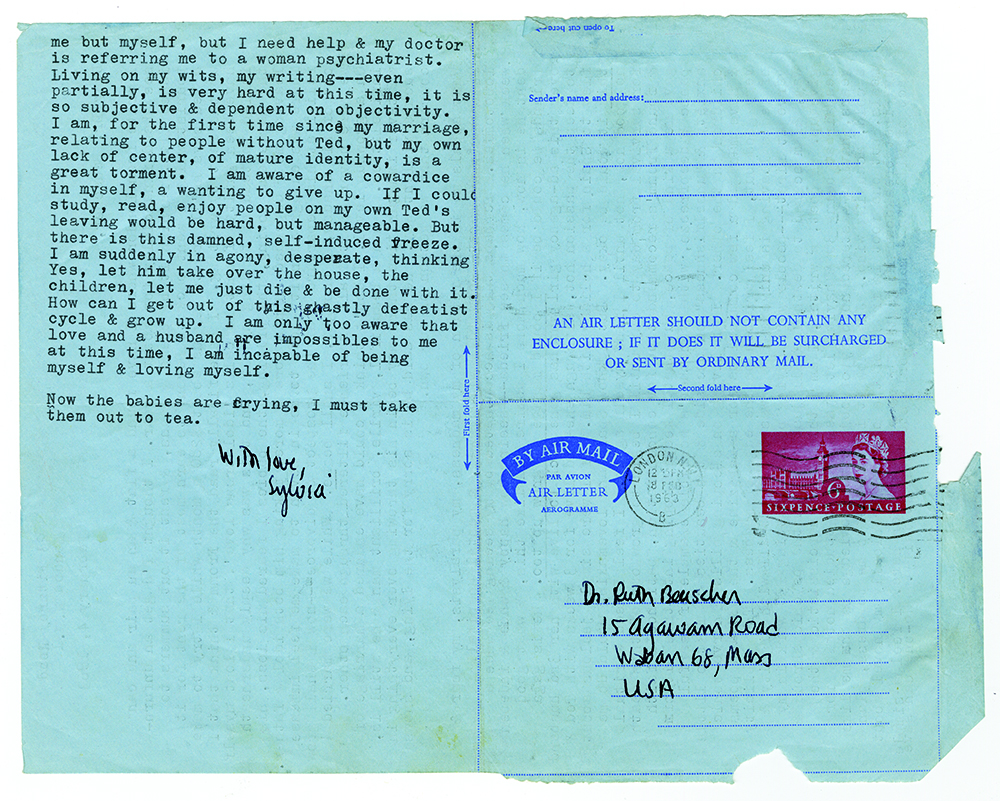 The first volume of Plath’s letters, published in late 2017, spanned Plath’s early education at Smith College, her Mademoiselle internship in New York, her Fulbright at Cambridge – where she first met Hughes at the ‘fatal party’ at Falcon Yard – and the early days of their marriage. Volume 2 picks up the day after Plath’s twenty-fourth birthday and ends a week before her death at thirty. Plath was a prolific correspondent: the letters in this volume alone total 575 letters to 108 recipients – an extraordinary number when considering the breakneck speed with which she composed her poems and the hefty volume of her personal diaries. Her most frequent correspondent is her mother, Aurelia Schober Plath, who served as Plath’s de facto secretary, mailing her poems to American magazines and helping to manage the couple’s affairs in the United States.

Plath’s missives to her mother are unfailingly chipper and practical; they contrast vividly with the poems she was writing at the same time, which she describes offhandedly as being ‘about cadavers, suicides, Electra complexes, ouija boards, hermits, fat spinsters, thin spinsters, ghosts’. She writes in hyperbolic, rhapsodic terms about married life: ‘I really don’t know how I existed before I met Ted,’ she tells her mother. She manages the household finances with military precision, joyfully totting up the earnings from their poems. Her literary ambitions and successes are chronicled in forensic detail, from her first appearance in The New Yorker to her excitement upon signing a contract with Heinemann for her first collection, The Colossus (1960). These milestones are supplemented with comprehensive footnotes by the volume’s editors, Steinberg and Kukil, allowing the reader to cross-reference the composition of Plath’s poems with developments in her daily life.

Yet Plath’s precocious accomplishments often take a backseat to her adulation of Hughes. She boasts about his every publication and accolade, casting herself as ‘his American agent’ and expressing supreme confidence in his genius. While she insists to her mother that there is ‘no question of rivalry’ between them, she is nonetheless relieved that Hughes experiences success before she does. When Auden, Stephen Spender, and Marianne Moore award the Poetry Centre First Publication prize to Hughes’s first volume, The Hawk in the Rain (1957), she writes: ‘I am so happy his book is accepted first. It will make it so much easier for me when mine is accepted.’ Flirting with mysticism, she consults tarot and horoscopes to foresee the couple’s literary future, predicting that Hughes ‘will be the best poet since Yeats & Dylan Thomas’ and that he ‘will win the Pulitzer some day’. Elsewhere, she declares ominously, ‘we are going to catapult to fame’. 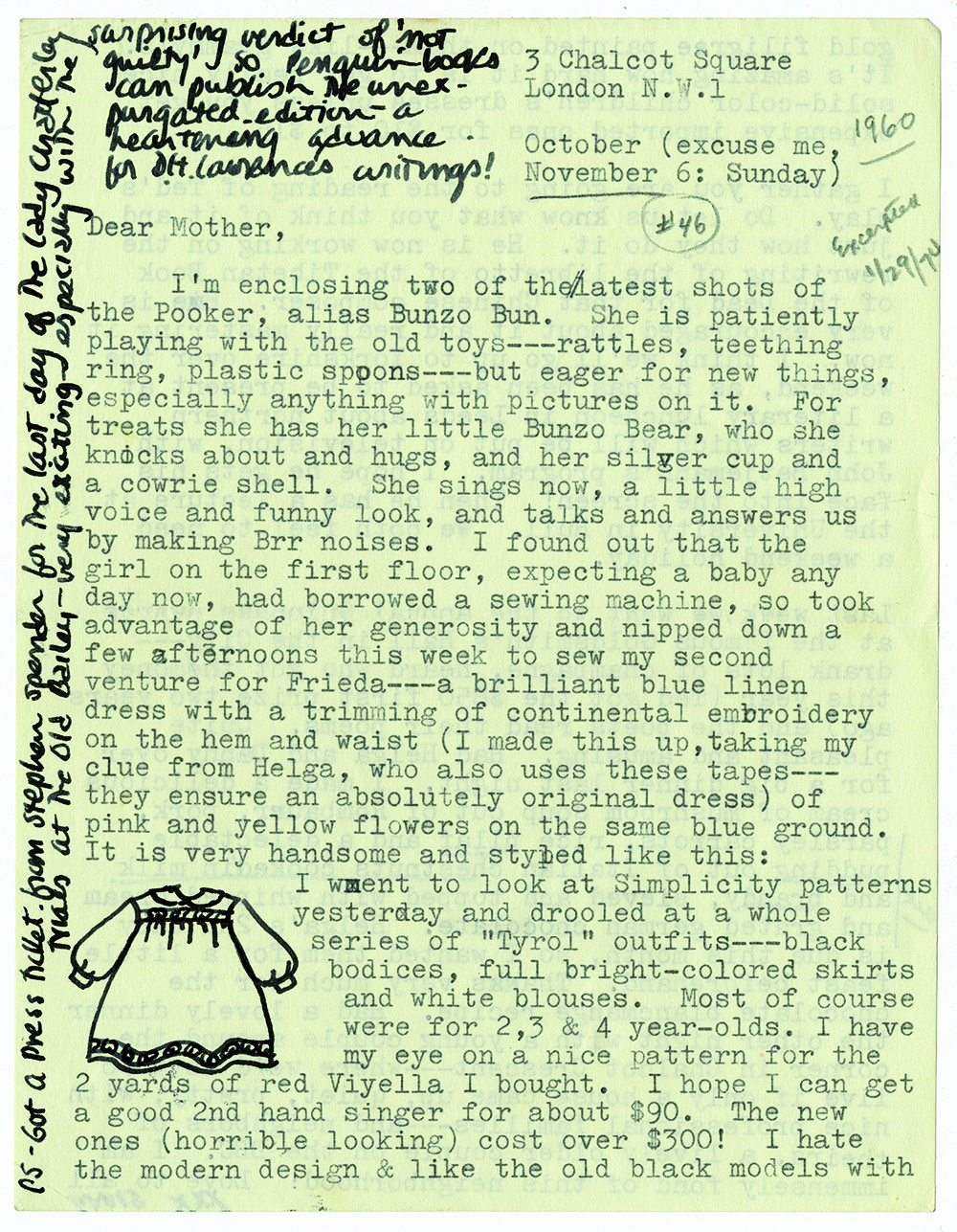 Sure enough, the fame Plath foresaw dawned. Flushed with their combined success, and with Plath pregnant with their second child, the couple bought Court Green, a house in North Tawton, Devon. Plath is initially ecstatic about her bucolic writing life with Hughes, which only makes the shock of his infidelity more acute when it arrives on the heels of the birth of their son. Hughes leaves Plath midway through a trip to Ireland to pursue his affair with Assia Wevill, whom Plath waspishly nicknames ‘Weavy Asshole’. Plath’s letters to Beuscher become desperate; she quickly reaches ‘a nadir, very grim’. Even in the throes of her deepest unhappiness, however, she is adamant about the primacy of writing in her life: ‘What I am not is a Penelope type … I am damned if I want to sit here like a cow, milked by babies. I love my children, but want my own life. I want to write books.’

Ostracised by the literary circles that once embraced her, and shunned by friends who side with Hughes, Plath finds herself snookered by the same notoriety she once sought. She oscillates between defiance – ‘my independence, my self, is so dear to me I shall never bind it to anyone again’ – and devastation: ‘Why in God’s name should the killing of me be so elaborate, and the torture so prolonged,’ she asks Beuscher. In December 1962 – one of the coldest winters on record – she moved back to London with her children into a Primrose Hill flat once inhabited by Yeats. Less than two months later, after a frenzied burst of creativity in which she composed many of the great poems of Ariel (1965), often at the rate of one or more a day, she suicided. 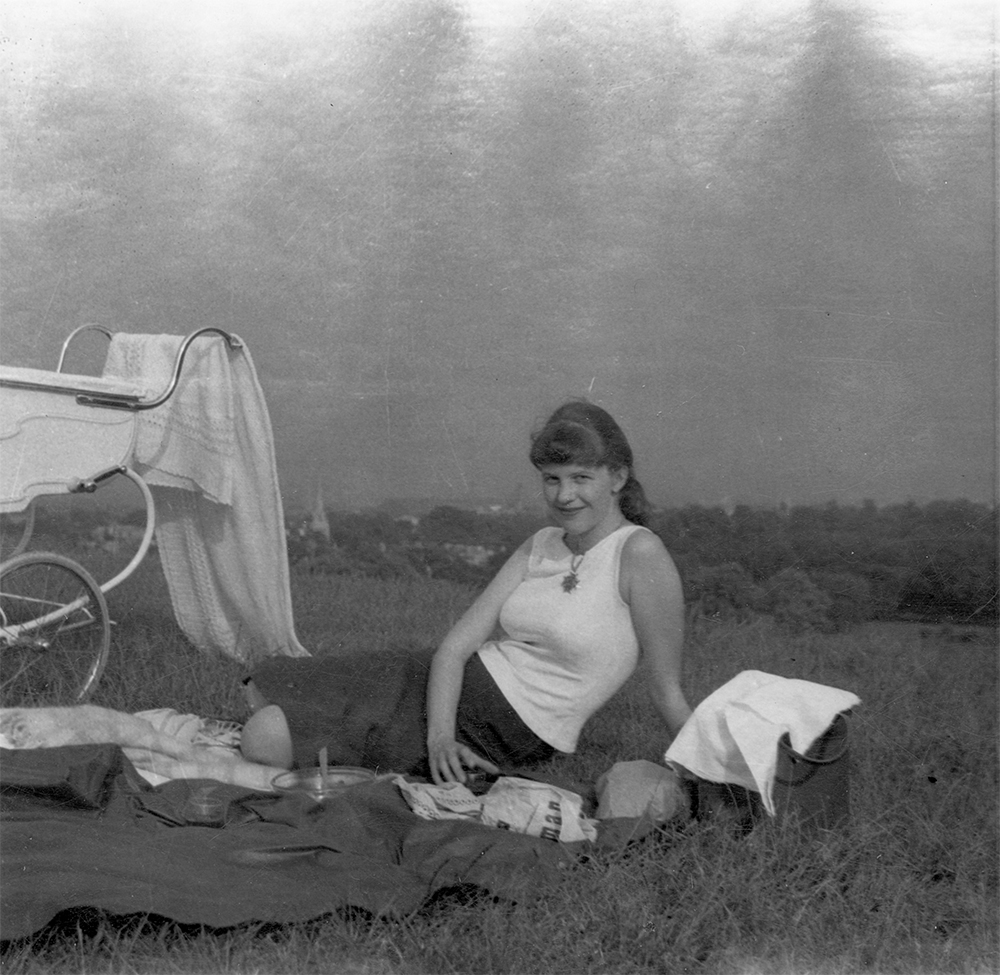 Stripped of the cheery optimism and pragmatic veneer that predominate her letters to her mother and friends, Plath’s overtures to Beuscher are a jolting reminder of the circumscribed lives women led in the sanitised 1950s. It is tragic that Plath did not live to see second-wave feminism usher in new freedoms for women, though her last letters testify powerfully to the claustrophobic discontents and gendered strictures of family life for women of the era. However, it is also hard to argue with Plath when she accuses herself of having given too much of herself over to her marriage, and her late epiphany that she made Hughes ‘both idol & father’ is excruciating. Even at the height of her disdain for Hughes’s cruelty and moral weakness, her admiration of his poetry endures. ‘Ted has … some of the inhumanity of the true genius that must kill to get what it wants,’ she says, proffering a partial exoneration. Yet the overwhelming impression left by Plath’s haunting last letters is of her own genius; as difficult as they are to read, they are a thundering reminder of her singular talent. It is a great relief when, after all her praise of Hughes, Plath writes to Beuscher a week before her death, ‘I am a genius of a writer, I have it in me.’ She was, and she did. 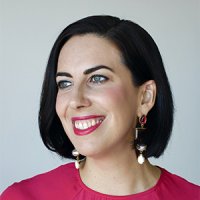 Sarah Holland-Batt is the author of two award-winning books of poetry, Aria and The Hazards (UQP), and a forthcoming volume of essays on contemporary poetry, Fishing for Lightning: The Spark of Poetry (UQP, 2021). She is the recipient of a number of honours, including the Prime Minister’s Literary Award for Poetry and a Sydney Myer Creative Fellowship. As of 2021, she is the Judy Harris Writer in Residence at the Charles Perkins Centre at the University of Sydney, and works as a Professor at QUT. 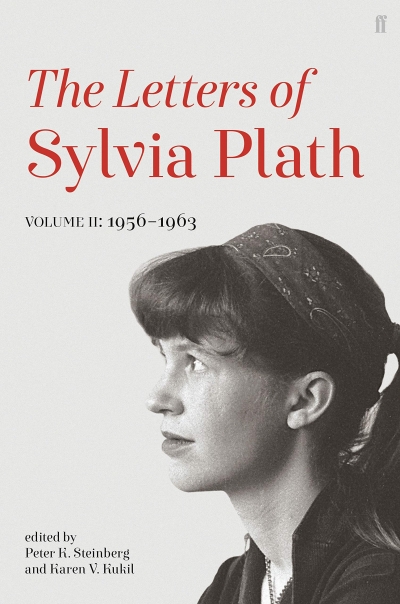