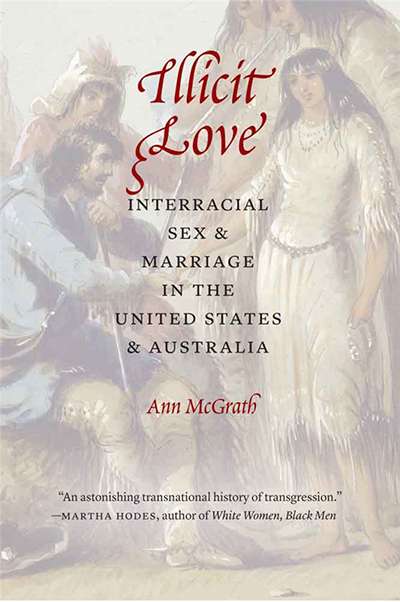 Illicit Love: Interracial sex and marriage in the United States and Australia

In the New England summer of 1825, the residents of Cornwall, Connecticut, built a funeral pyre in the middle of their village green. From a nearby window, nineteen-year-old Harriett Gold watched as the flames leapt into the sky, her heart consumed with ‘anguish’. Among those burning Harriett’s effigy was her brother, Stephen, who, like nearly all of the town’s citizens, had turned against her since the banns of Harriett’s marriage to the young Cherokee Elias Boudinot were posted on the door of the Congregational Church a few weeks earlier. In the same notice, church elders, many of whom were close friends of Harriett’s parents, openly condemned her flagrant intention to marry across racial boundaries. Although the marriage went ahead, it was nonetheless, the elders declared, ‘criminal’ and ‘evil’, ‘an outrage upon public feeling’. Forced to run the gauntlet of social opprobrium and lynch mobs who eventually ran her out of town, Harriett, as Ann McGrath eloquently writes, was bravely ‘swimming downstream, against the tide of history ... against the assumed order of things’.

The harrowing yet ultimately inspiring story of Harriett and Elias, and their determination to marry in the face of overwhelming resistance – they eventually fled south, bringing up their children within the welcoming arms of the Cherokee ‘nation’ – is one of several intimate, ‘transnational’ histories of interracial sex and marriage in nineteenth-century United States and early twentieth-century Australia brought powerfully to life in McGrath’s Illicit Love. McGrath grew up in Queensland in the 1960s and 1970s, where Aboriginal people had been erased from the landscape, as if ‘they had never shared the same spaces, let alone fallen in love or gotten married, or lived in our streets, on their land, and among us all’, an experience that shaped the direction of her future work as an historian.

Mark McKenna is an Australian Research Council Research Fellow in History at the University of Sydney. His most recent book, An Eye for Eternity: The Life of Manning Clark (Miegunyah Press, 2011) won the 2012 Prime Minister’s Prize for Non-Fiction.

Illicit Love: Interracial sex and marriage in the United States and Australia

Mark McKenna is an Australian Research Council Research Fellow in History at the University of Sydney. His most recent book, An Eye for Eternity: The Life of Manning Clark (Miegunyah Press, 2011) won the 2012 Prime Minister’s Prize for Non-Fiction.