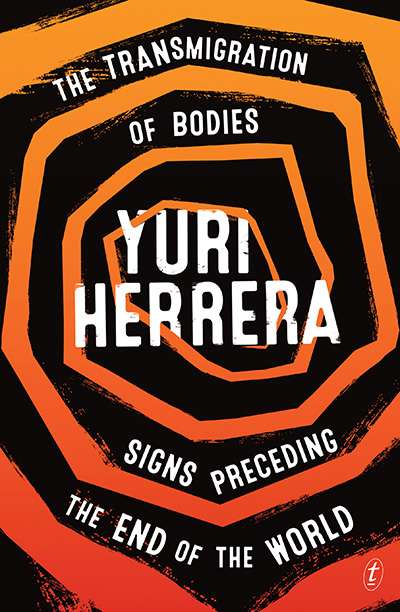 Mictlán, the underworld of Aztec mythology, is divided into nine regions, like Dante’s Inferno. Yuri Herrera’s novella, Signs Preceding the End of the World, opens with a symbolic doorway to that underworld: a sinkhole that swallows a man, a dog, and a couple of cars parked down the street, missing Mika, the protagonist, by a few steps.

Signs Preceding the End of the World is one of two novellas in this volume. Herrera belongs to a group of Mexican authors whose translated works are making headlines internationally (Valeria Luiselli, Álvaro Enrigue, Juan Villoro). To date he has published two children’s books, and three novellas. His first novella Trabajos del reino (to be published next year in translation as Kingdom Cons) tells the story of a talented singer and songwriter who falls under the dangerous patronage of a drug lord. Kingdom Cons received critical acclaim as an early example of what is now known in Mexico as ‘narcoliterature’, a subgenre that deals with the social and political issues that the drug wars have unleashed. The novella takes place in a border town, but the reader is never told exactly where. The text gravitates around the life and tribulations of a drug lord, but again, words that one would normally associate with such a setting are not present in the text.