Amanda Joy, from Western Australia, was named overall winner of the Peter Porter Poetry Prize at a Boyd ceremony on 9 March. Her poem is entitled 'Tailings'. All five shortlisted poets introduced and read their poems – two of them disembodiedly (Lisa Gluskin Stonestreet from the United States, Dan Disney from Korea). Amanda Joy received $5,000 and a print by Arthur Boyd; the other poets each received $625.

In their report, the judges – Luke Davies, Lisa Gorton, and Kate Middleton – described 'Tailings' as 'a poem remarkable for its close-woven language, everywhere charged with vivid details; and, at the same time, remarkable for its open and wide-ranging attentiveness. In "Tailings" the poet nowhere sets place at an aesthetic distance but everywhere attends to its mess and profligacy, a mode of perception alive to the hunger of animals.' The full report is available here. 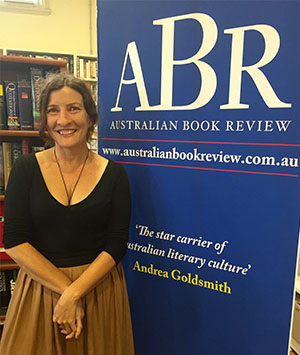 Amanda Joy at the 2016 Peter Porter Poetry Prize ceremonyAmanda Joy told Arts Update: 'I am delighted and deeply humbled to have won this prestigious prize honouring Peter Porter. To have been included in such a fine shortlist and published in ABR was thrilling enough. I am wildly grateful to the judges, the shortlisted poets, all three judges, Peter Rose and the staff at ABR. This is such a wonderful portent for my new collection.'

Before the announcement, several people read poems by Peter Porter. These included the poet's daughter Jane, who lives in Melbourne, and Morag Fraser, who generously supports this prize. Judith Bishop – the only person to have won ABR's poetry prize twice, and the first winner of the Porter Prize, as it was renamed in 2011 – read from the new collection of Peter Porter's final poems, Chorale at the Crossing (Picador).

We love hearing from readers as to what they like about Australian Book Review – whom they enjoy reading; what they would like to see more (or less) of. Please complete our reader survey and help us to go on improving the magazine. The survey takes about five minutes to complete. Feel free to skip any questions that don't interest you. The survey is totally anonymous – unless you want to be in the running for one of two five-year complimentary subscriptions to ABR Online (in which case we will need your name and email address).

Australia has several lucrative prizes for individual poems, including the ACU Prize for Poetry, which is now open until 6 June. The total prize money is $10,000 (of which the winner receives $7,000). The ACU Prize 'aims to support writers and to continue the tradition of the Catholic Church as a key patron of the arts'. The theme this year is 'loving kindness', inspired by Isaac Bashevis Singer's remark, 'Kindness, I've discovered, is everything in life.'

2016 has been an exciting year for our past Jolley Prize winners and shortlisted authors. Jennifer Down won the 2014 Jolley Prize with her story 'Aokigahara' and her début novel Our Magic Hour was released in February by Text Publishing. You can read Gretchen Shirm's review in this issue here. Text will also be publishing the Australian edition of Jack Cox's début novel Dodge Rose (first published by Dalkey Archive Press) in May. His 2012 Jolley Prize shortlisted story was 'Gorgeous Perambulator'. And Michelle Michau-Crawford's début short story collection Leaving Elvis and other stories (reviewed by Francesca Sasnaitis in our March issue) is out now from UWA Publishing and will be launched at an event in Perth on April 6. 'Leaving Elvis' was the title of her 2013 Jolley Prize winning story published in the October 2013 issue. Michau-Crawford was our 'Future Tense' guest in the January-February issue. The 2016 Jolley Prize (now worth a total of $12,500) closes on at midnight on April 18.

Our new federally organised poetry anthology project – funded by Copyright Agency's Cultural Fund – is off to a buzzy start around the country. During Writers' Week, in front of hundreds of poetry lovers, South Australian state editor Peter Goldsworthy introduced five of the six poets included in his selection (single works by all six appeared in our March issue).

Next month, on 4 May, state editor Elizabeth Allen and ABR Editor Peter Rose will introduce the poets included in the New South Wales anthology: Susie Anderson, Pam Brown, Toby Fitch, David Malouf, Kate Middleton, and Fiona Wright. Joining the featured poets will be ABR Laureate's Fellow Michael Aiken.This is a free event at Gleebooks, starting at 6 pm. You can rsvp online via Gleebooks or call them on (02) 9660 2333.

Regional literary festivals can be unusually satisfying, and the Clunes Booktown Festival is one of the more congenial as well as impoverishing, because of the antiquarian booksellers who throng the old gold town. This year, Booktown celebrates its tenth birthday. The festival runs from 30 April to 2 May. There will be a significantly expanded speaker program at this year's festival. Speakers will include Fran Bryson, Arnold Zable, Gregory Day, Rod Jones, and Helga Leunig.

The library of Text Classics continues to grow, auspiciously. This month we have a new edition of M.J. Hyland's Carry Me Down (2006), introduced by J.M. Coetzee, who writes in his Afterword: 'Like Henry James's What Maisie Knew, to which it owes an obvious debt, Carry Me Down works by indirection.' Reviewing the novel in the March 2006 issue of ABR, Michelle Griffin admired her 'steely' prose: 'Her sentences are so crisp they have hospital corners.'

May will bring John Foster's memoir, Take Me to Paris, Johnny (1993), introduced by Peter Craven, with an Afterword by John Rickard. In October, Text will publish four novels by Christina Stead. Introducers will include David Malouf (A Little Tea, A Little Chat, 1948) and Margaret Harris (The Beauties and Furies, 1936).

These welcome reprints are priced at just $12.95 each – remarkable value given their pedigree.

David Malouf is not alone in regarding ABR as 'essential reading for anyone here who is seriously interested in any of the arts'. Arts Update continues to grow all the time, with new arts journalists contributing timely, lengthy, considered reviews of films, plays, operas, concerts, dance, festivals, and art exhibitions. In our fortnightly Arts Update e-bulletin we offer subscribers double passes to major performances or films. If you don't subscribe to the e-bulletin, all you have to do is click here to sign up.