John McLaren, who died peacefully in St Vincent's Private Hospital on 4 December 2015, was a man of many fine attributes and talents, not the least of which was his capacity for friendship. John had many close friends towards whom he showed great loyalty, affection, and generosity. They, in their turn, recognised the strength and quality of the quite precious bond his character and personality made possible.

He was a towering presence intellectually and physically, although, as he would often admit with wry self-deprecation and an awkward wave of one long arm, somewhat uncoordinated, and he assumed effortlessly and without pretension a leadership or advisory role when he judged it appropriate and useful to do so. He was creative and productive wherever he worked, whether in bush schools or, as his career matured, in tertiary education, but his arrival at the Footscray Institute of Technology in 1976 was the beginning of his flowering as teacher, researcher, and intellectual. With a group of like-minded young colleagues, he set about establishing research and the humanities as integral to their collective enterprise and not the poor cousins they had become in other institutions of technology. As Professor Peter Dawkins, Vice-Chancellor of Victoria University, observed, John led from the front, undertaking and completing a PhD on the medieval university that was memorable for its contribution to the field, its exemplary research skills, and its lucidity.

His passionate and knowledgeable championship of the arts and of Australian literature, in particular, led him to embark, as Editor, on the resurrection of Australian Book Review when it was revived in 1978 by the National Book Council. He held the position until 1986. The meetings of the reviewing team at John and Shirley McLaren's North Carlton house were legendary for their rousing debates, commitment to the literary task, and Shirley's splendid suppers. John was also Associate Editor of Overland, supporting his close friend Stephen Murray-Smith for many years and taking over the editorship from 1993 until 1997. 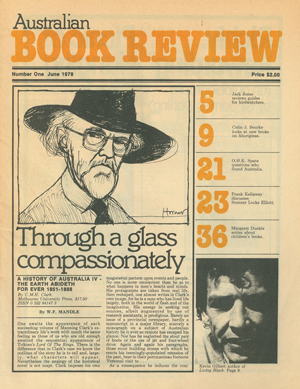 The first issue of the second series of Australian Book Review, June 1978

In the meantime, as well as teaching and working as Associate Dean in Research and Training, John wrote many books including Melbourne: City of Words (2013) and Not in Tranquillity: A Memoir (2005). His biography, Journey without Arrival: The Life and Work of Vincent Buckley (2009), was awarded the Walter McCrae Russell Award for literary scholarship. His output of essays, articles and occasional polemical correspondence was prodigious, strenuously left-wing, and continued until he could no longer manage his computer.

John could be fierce in debate, but, above all, he was a tremendously amiable, gentlemanly bloke – a truly wonderful human being. With Shirley, to whom he was devoted, and his family, he reached out to friends and cared for them. Toddlers were embraced; twenty-somethings, including mine, were fed or housed without stint and unconditionally.

The literary culture which he served so well, the polity of which he was a stringent, discerning critic, the world of bonhomie and life affirmation, and above all his many close friends are all the poorer for his passing.