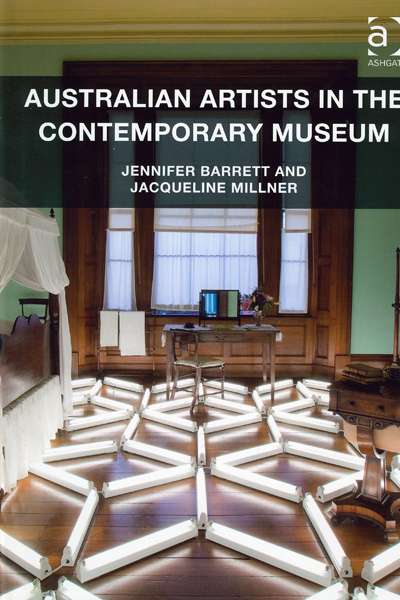 Australian Artists in the Contemporary Museum

I like a book jacket that tells you clearly, in words and images, what it is about. Australian Artists in the Contemporary Museum does just that: ‘The authors’ central argument is that artists’ engagement with the museum has shifted from politically motivated critique taking place in museums of fine art, towards interventions taking place in non-art museums that focus on the creation of knowledge more broadly.’

And the image on the front, Gurrajin by Jonathan Jones, an installation from 2006 set in Elizabeth Bay House, illustrates this argument as well as any of the many examples reproduced inside. Honeycombed fluorescent lights cut white diamond shapes through the staid nineteenth-century interior with its pale green walls. It is like a duel between Dan Flavin and Ilya Kabakov for control of the same space. In fact, as the fifth section of the book, ‘Beautifying the Museum: the Aesthetics of Collections’ make clear, ‘The work honours the original occupants of this site by evoking their presence through flamboyant beauty.’ The inspiration comes from Aboriginal fisher-people and the double reflections set up by the small fires burning on board their vessels.

Like many, I have long been aware of the tendency, going back two or three decades, for artists to work within, reinterpret, and often challenge the works held in non-art museums, and the very spaces themselves. But this book astonished me by the sheer number of these projects, and it is a delight to see them all brought together. It is a global tendency, of course – Joseph Kosuth’s Passagen-Werk at documenta in 1992, where he veiled traditional statues with black cloth and white texts by Wittgenstein, Derrida, and Kafka is a prime example – but it is also impressively Australian, with some of our finest artists engaging in this hybrid practice. Thus we find Ross Gibson installing his work Life After Wartime (2003) in Sydney’s Justice and Police Museum. Botanic gardens across Australia have also been used as sites for creative interventions by many artists, but importantly by Janet Laurence and Peter Cripps. Writing about his project at The Museum of Economic Botany in Adelaide in 1993 (Project for Two Museums), Cripps said, ‘I was looking for a parallel stream. That’s what these museums are. They’re parallel to art museums but they aren’t that thing. So it was the possibility that I could do things in this context that I could never do within an art museum. I received incredible support from the Botanic Gardens – no resistance, the best experience I’ve ever had.’

Australian Artists in the Contemporary Museum