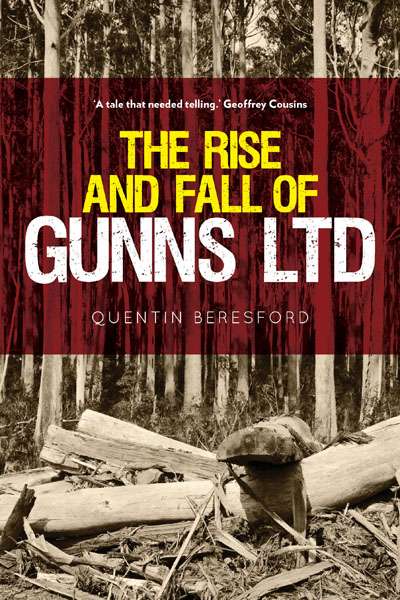 The Rise and Fall of Gunns LTD

Since the loss of Lake Pedder, the Apple Isle has been the site of some of Australia’s most famous environmental battles: Franklin River, Farmhouse Creek, Wesley Vale, Styx Valley. In the Tamar Valley near Launceston, tensions continue to simmer over the future of the Gunns Pulp Mill – even in the wake of the collapse of its original proponent, Gunns Ltd, in September 2012. That Gunns and its demise still cast such a long shadow over Tasmanian politics speaks to the island’s past, present, and future. The Rise and Fall of Gunns Ltd is political scientist Quentin Beresford’s attempt to understand just how this came to be.

The Tasmanian thirst for economic development, Beresford argues, allowed ambitious and ruthless characters such as Robin Gray, Edmund Rouse, John Gay, and Jim Bacon to flourish and rise to power at the expense of democratic process and the island’s forests. A Tasmanian himself, Beresford is only too familiar with these excesses of developmentalism, having written extensively about its expressions in his adopted state of Western Australia. In The Salinity Crisis (2001), Beresford showed the toll of the postwar government’s pledge to clear ‘a million acres a year’, which spread the scourge of dryland salinity across the state’s wheatbelt. Just as this form of developmentalism waned, another emerged in its place as the WA Inc. scandal engulfed the state governments of the 1980s, which Beresford examined in his book The Godfather: The Life of Brian Burke (2008).

Ruth A. Morgan is a Lecturer at the National Centre for Australian Studies at Monash University.

The Rise and Fall of Gunns LTD

Ruth A. Morgan is a Lecturer at the National Centre for Australian Studies at Monash University.