Of all the many projects commemorating the centenary of World War I and the Anzacs’ contribution to it, the creation of an opera from David Malouf’s magnificent novella Fly Away Peter (1981) would seem to be one of the most demanding.

The story follows the young, bird-obsessed Jim Saddler from the almost prelapsarian idyll of the untouched Gold Coast hinterland to the muddy hell of the trenches around Armentières, but it is not the settings that are so challenging. The three main characters – Jim, the young landowner Ashley Crowther, and the photographer Imogen Harcourt – are each, in their own way, taciturn creatures who distrust speech and manage to communicate with each other in a nearly wordless fashion. Indeed, the first half of the book, set in and around the bird sanctuary on Crowther’s hinterland estate, has only the barest of dialogue. When the action moves to the trenches, we hear the semi-articulate words of the terrified young men who are thrashing around in the mud. We have a work in which most of the interaction between characters is non-verbal. But opera is the performing art which can convey unarticulated emotion best. As Malouf himself has said: ‘in opera we are in a world where the natural mode of expression is song. Not simply for what is normally spoken, the everyday exchanges between individuals, but for what is unspoken as well; mental apprehension and reflection and all the action of heart, mind and spirit.’

Composer Elliott Gyger and librettist Pierce Wilcox understand this. Wilcox’s taut, spare, impressionistic deconstruction of the novella clearly articulates Malouf’s themes, contrasting the seasonal migration of the birds with the transportation of young men from one hemisphere to another – young men who, unlike their avian counterparts, will never return home. Key phrases are repeated, gaining different meanings as their context changes, and there are moments in the chaos of war when nothing makes sense and words lose their meaning altogether, becoming mere sounds. Gyger’s powerful, subtle score underlines the contrast between the unspoilt natural world and the mechanised hell of modern warfare. The bird calls of James Wannan’s violin are drowned out by Alison Pratt’s ferocious percussion, though at odd moments of tranquility they can still be heard in the middle of battle. Gyger has said that his inspiration, and the formation of his septet, come from Stravinsky’s Soldier’s Tale, but the actual soundscape of the opera is all his own. 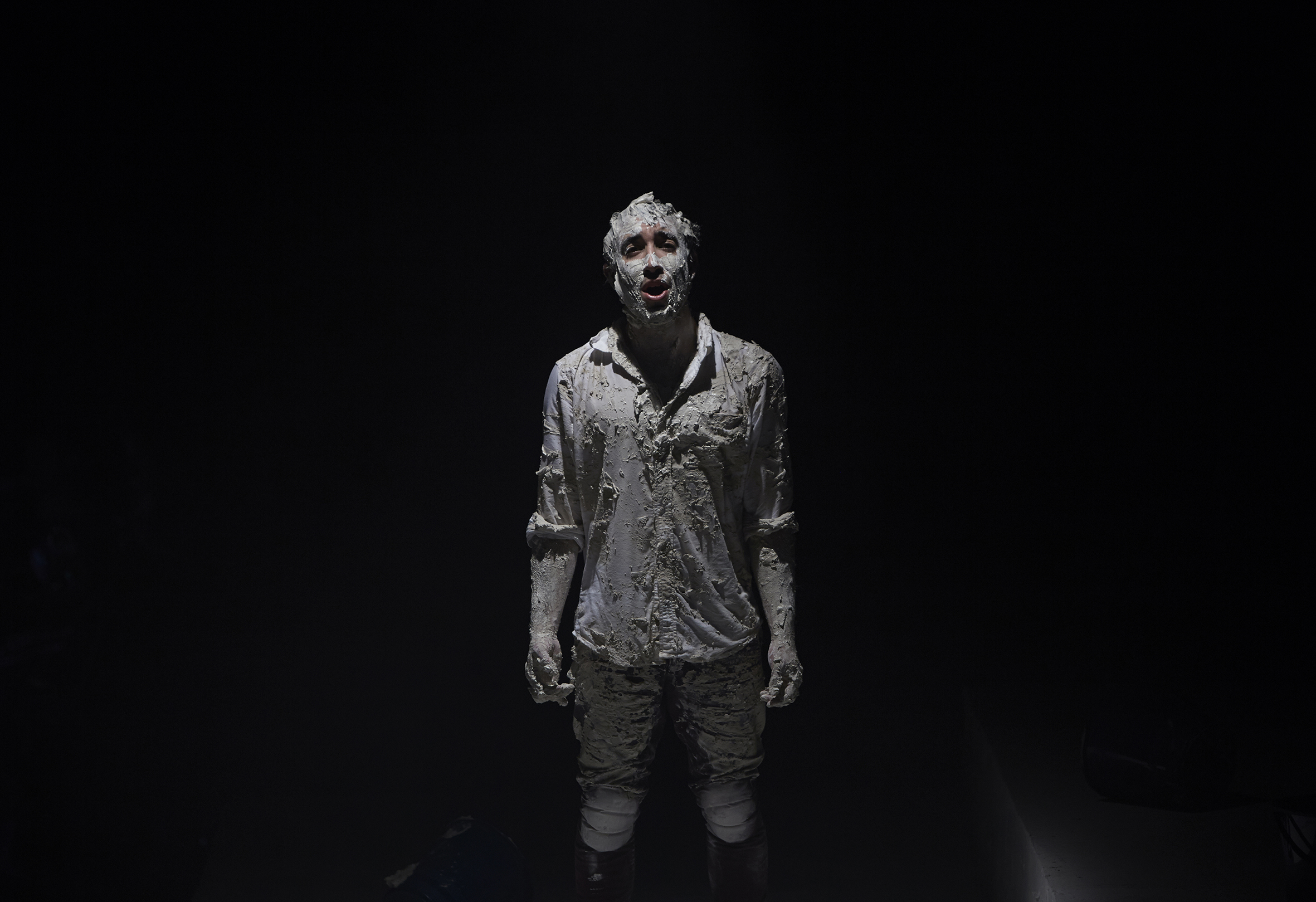 ‘Gyger has said that his inspiration, and the formation of his septet, come from Stravinsky’s Soldier’s Tale, but the actual soundscape of the opera is all his own’

On a simple tiered set designed by Elizabeth Gadsby, director Imara Savage and lighting designer Verity Hampson prove that it is intelligence, imagination, and fidelity to the work that make great theatre, not expensive showy productions (he said bitterly, having recently suffered through the Handa Opera on the Harbour Aida). The only props are buckets, some of which are filled with a clay-like substance, which the singers smear on themselves as the characters struggle through the trenches. When the dying Jim is coated with mud, we are aware that from earth we come and to earth we will return. Towards the end of the opera, as Ashley recites names of the dead of all nations, the buckets are lined up in rows, powerfully suggesting the fields of white crosses that are the permanent mementos of the fallen. 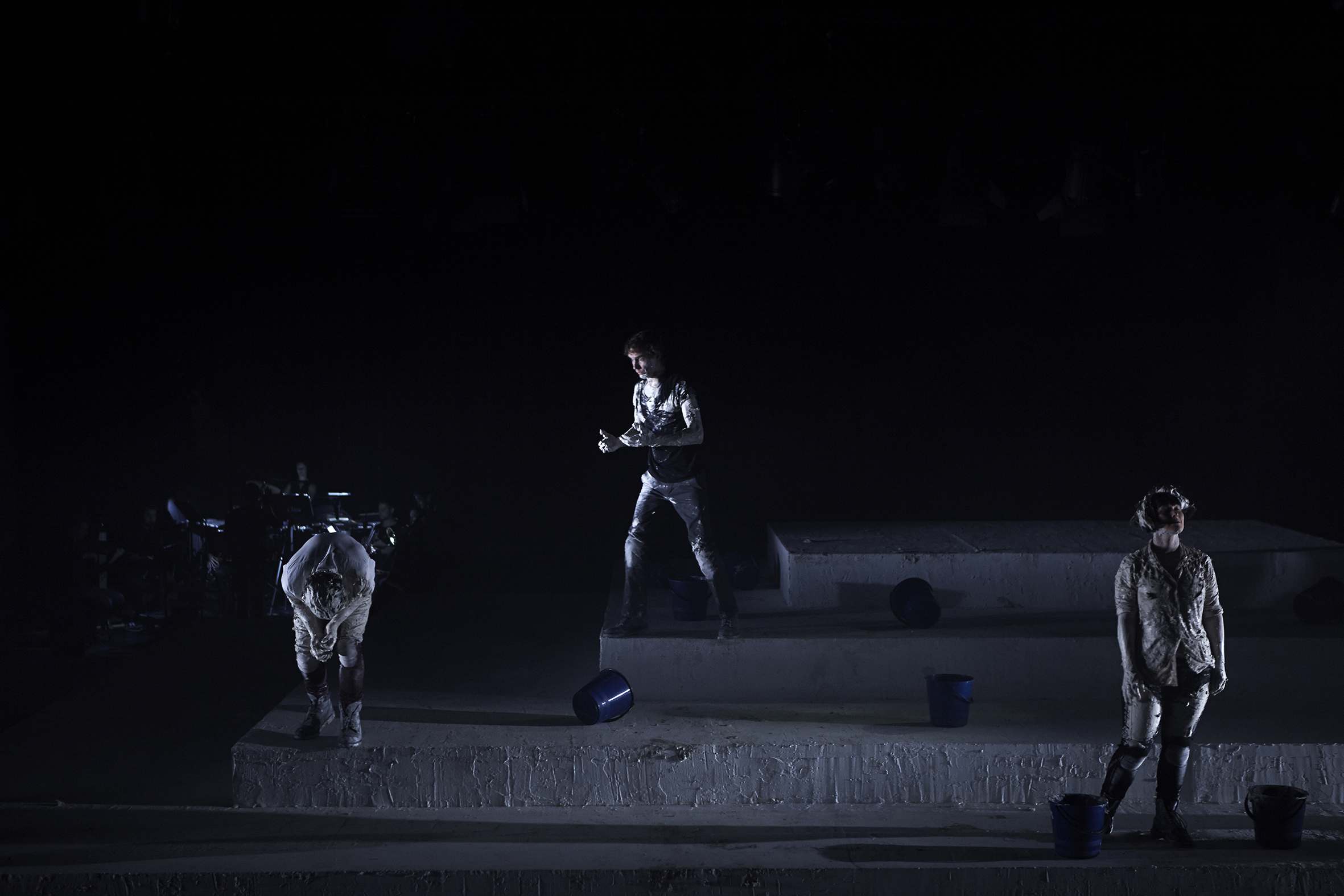 Opera, of course, ultimately depends on the singers, and all three are superb. Jessica Aszodi’s radiant soprano and sympathetic stage presence make Imogen Harcourt a warm and empathetic character, and she is very moving in her final elegy for Jim. In the war scenes, she functions as a commentator, and her voice blends beautifully with the others in their duets and trios.

Brenton Spiteri is simply astounding. His beautifully produced, well-focused tenor copes easily with everything Gyger’s score asks of it. He makes a likeable Ashley, and creates distinct characters out of all the other soldiers he is required to play.

‘When the dying Jim is coated with mud, we are aware that from earth we come and to earth we will return’

As Jim, Riley might not be vocally quite on the same level as the other two singers, but he is a fine stage presence, tall and imposing. His Jim is part shaman, part innocent, and his rapturous final scene is the opera’s highlight.

We can never truly appreciate what these young men experienced or comprehend the magnitude of the loss felt by those who loved them, but it is by the imaginative empathy of works like this that we can come close. At the end of Malouf’s libretto for the opera Voss (1986) what Laura sings to the dead Voss can apply also to the Anzacs: ‘your legend will be written in the air, in the sand, in thorns, in stones by those who are troubled by it. And what we do not know the air will tell us, the air will tell us.’

Fly Away Peter, composed by Elliot Gyger and directed by Imara Savage, Sydney Chamber Opera. This season, at Carriageworks, runs until 9 May 2015. Performance attended 6 May.