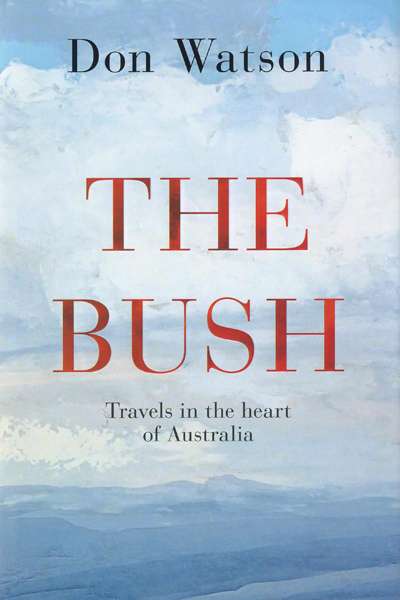 THE BUSH: TRAVELS IN THE HEART OF AUSTRALIA

Late in 1986, the Australian Bicentennial Authority took sixty celebrities off to Uluru to make the television advertisement containing the jingle ‘Celebration of a Nation’. Just as the shoot finished, a heavy storm broke, prompting the stars to run for cover. ‘Oh, darling,’ cried Jeanne Little, a popular television personality at the time. ‘The real Australia’s quite frightening, isn’t it?’

Don Watson would surely agree. His celebrated book on Paul Keating was called Recollections of a Bleeding Heart (2002), but even when he draws attention to the mass destruction of animal life in drought and flood, the killing of native animals for profit, the butchery of wild horses, or the brutality of industrialised slaughter in abattoirs, The Bush: Travels in the Heart of Australia is not the work of a bleeding heart. Watson does nothing to obscure the brutal reality of rural life as it has been lived in Australia: the violence of colonists towards Aboriginal people, the mass killing of native animals and stock, the almost frenzied destruction of trees and scrub as settlers cleared the land in the quest for independence and civilisation. Yet he is also sympathetic to the men and women on the land, recognises the value and importance of what they do, and is more than capable of casting a cool eye on the easy judgements that city folk so often make about them. There is affection for farmers and farming, but also the sharp perspective of an observer able to see rural enterprise in the wider context of Australia’s history and environment. Wealthy graziers are applying the latest science to their farms – they love their Roundup – but are decidedly hostile when the same kind of scientific enquiry that puts dollars in their wallets also points to anthropogenic climate change, the harmful effects on humans of the chemicals they use on their crops, and the damage their stock is doing to the environment. Yet Watson also meets country people doing their best to rejuvenate the ruined land, and he manages to see beauty in landscapes that ecologists would tell us have been destroyed by bad farming and other abuses.

THE BUSH: TRAVELS IN THE HEART OF AUSTRALIA