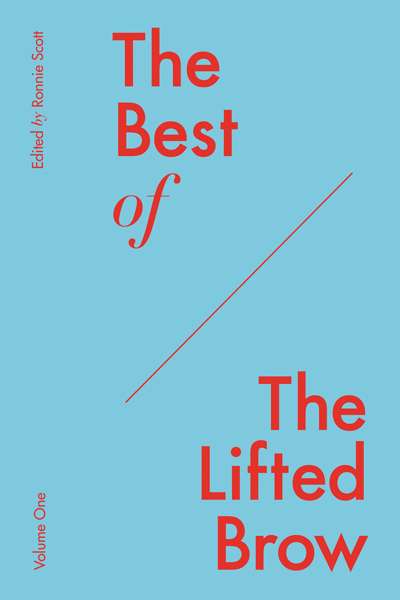 The Best of the Lifted Brow: Volume One

Ronnie Scott, who started The Lifted Brow in Brisbane in 2007 at the age of twenty, has now curated this Best of collection from the magazine’s first five years. It’s an eclectic mixtape of contributions from internationals such as David Foster Wallace, Heidi Julavits, and Tao Lin, local writers Christos Tsiolkas and Frank Moorhouse, and a roll-call of the young and/or hip, including Romy Ash, Tom Cho, Anna Krien, and Alice Pung, many of whom were but talented emerging writers when their work first featured in the magazine.

It’s hard not to point to Michaela McGuire’s caustic but strangely uplifting diary of an ashtray-emptying summertime casino worker, which opens the collection, as broadly emblematic of The Lifted Brow’s often playful, ironic sensibilities, and its predilection for entertaining and creative non-fiction. Luke Ryan’s light-hearted cancer memoir and Benjamin Law’s tale of nuking the shit out of Queensland cockroaches also fit this bill.

The Lifted Brow is also serious about short fiction. Karen Russell’s story of women on pilgrimages to a sham fertility well on a Spanish clifftop presents a world crafted in perfect magic realist miniature. n.a. bourke’s‘Arboretum’ is an unforgettable account of the surprising proximity of grief and fleshly desire, and is one of two stories about human hearts. The other, ‘Pang’, by Robert Shearman, takes the metaphor of heartbreak somewhere both impossibly literal and horrifyingly, viscerally familiar.

If the quality of a literary magazine’s best short fiction is an index of excellence, this collection should leave no one in doubt of either The Lifted Brow’s ambitions, nor of its track record in realising them. Under Scott’s editorship – and now with Sam Cooney at the helm – the bimonthly arts, culture, and fiction publication affectionately known as The Brow has lived up to its potential.

The Best of the Lifted Brow: Volume One