Mother of Rock: The Lillian Roxon story by Robert Milliken

Mother of Rock is an Australian journalist’s adoring biography of one of our great social journalists. Sydney newsman Robert Milliken’s life of expatriate writer Lillian Roxon (1932–73) is foremost an account of the birth of celebrity tabloid press in the 1960s and its close links with the emergence of rock music as an art form and breeding ground for ‘stars’. Like Roxon’s writing itself – a generous selection of which is reproduced at the back of the book – what little discussion of the qualities of the music of the times there is comes second to an account of its social and market implications and its dramatic leading personalities. Roxon emerges as a radical, under-acknowledged progenitor of ‘new journalism’.

Milliken’s portrait of Roxon as a driven journalist, irrepressible wit, compulsive communicator and, above all else, generous friend to many in the libertarian milieu that found expression in 1960s rock benefits from his regular deferral to Roxon’s own version of events drawn from the ‘Lillian Roxon Papers 1945–1973’, an extensive cache of letters left by Roxon to Sydney’s Mitchell Library. Milliken considers Roxon ‘one of the last great letter writers before the age of electronic mail’, and embeds long excerpts from her correspondence with everyone from her boss at the Sydney Morning Herald’s New York bureau, John Moses, to on-again off-again friends Germaine Greer and Linda McCartney (née Eastman) throughout. These sections are the most immediate of Milliken’s narrative, and he is careful to keep Roxon’s playful voice close to his telling of her life in Brisbane during the 1940s, Sydney during the 1950s, and New York during the 1960s.

Roxon’s social daring and prolific writing are startling. As a sixteen-year-old in pre-war Brisbane, Roxon emerges, in the words of friend Grace Garlick, as ‘full of sex and wisdom and boys talk … completely uninhibited [and] irresistible’, and as a significant personality among the Pink Elephant crowd, a subversive group of artists described by Peter Porter as a ‘strangely anachronistic literary ganging-up … [who] dared to practise a mixture of left-wing politics and high camp at a time when such notions were dangerous’. Milliken depicts Roxon as tremendously good at involving herself with influential people – Donald Friend, Barrie Reid and Barbara Patterson (who would marry Charles Blackmann) – and identifies the group as Roxon’s first salon, ‘a teenage version of the more intense bohemian and counterculture cauldrons at the Lincoln Inn coffee shop in Sydney and Max’s Kansas City nightclub in New York’.

Mirroring Roxon’s contextual approach to rock journalism, Milliken’s biography aspires to social history in his well-researched chapters on Roxon’s life in Sydney and the anti-authoritarian group to which she gravitated, known as the ‘Push’. Push identities included artist John Olsen and poets Harry Hooton and Lex Banning. The group ‘set out to live their definition of freedom, not just to argue about it’ in ways Milliken argues foreshadowed the coming rock culture revolution. In opposition to times so prudish that ‘Margaret [Fink] and Barry [Humphries] were once asked to leave the Australia Hotel after the staff disapproved of their kissing in the foyer’, the Push championed free sexuality and thinking, with Roxon recording their every exploit in her first gossip column, ‘The Postman’s Knock’, for Sydney University’s newspaper, Honi Soit. These were Roxon’s first ‘scene pieces’, written with her trademark playfulness. Fellow rock writer Richard Meltzer describes Roxon’s tone as ‘authentic, and never nasty or illtempered in the slightest’.

In 1957, Roxon started writing for Frank Packer’s Weekend magazine, edited by Donald Horne, before transferring to New York in 1958 to write for Rupert Murdoch’s Daily Mirror. Roxon remained in New York for the rest of her life, contributing as a chief reporter for the Sydney Morning Herald alongside Derryn Hinch, Margaret Jones, Peter Michelmore and Maurice Adams, while moonlighting at underground nightspots Max’s Kansas City and The Scene, where she mixed with rock stars and gathered material for her landmark book Rock Encyclopedia (1969), the ‘first book to treat rock culture as a legitimate presence [with] Lillian’s announcement that a new breed of writer, the rock writer, was as much a star of the times as the stars themselves’. Rock Encyclopedia included 500 entries from‘Acid Rock’ to the ‘Zombies’, 1,202 rock stars and 22,000 song titles. It heralded the arrival of rock as big business and popular art on a par with film and literature.

Mother of Rock closes with one hundred pages of Roxon’s original writing, which justify Milliken’s depiction of her as a general symbol for everything the 1960s counter-cultural revolution stood for: free thought, inclusivity, artistic and political equality and ‘unadorned earthiness’. Her vivid, quick-flowing passages bristle with affection for her subjects and with a plucky Australianness that Milliken identifies in the best aspects of rock. His biography of Roxon and her light verbal brilliance are entertaining reminders of that hopeful period described by Milliken as now ‘so far away it is often hard to imagine that it ever existed’.
Leave a comment

Mark Gomes is a former Deputy Editor of ABR. He has written art criticism for publications including Australian Art Collector, Photofile, Broadsheet and Brisbane’s Courier-Mail. 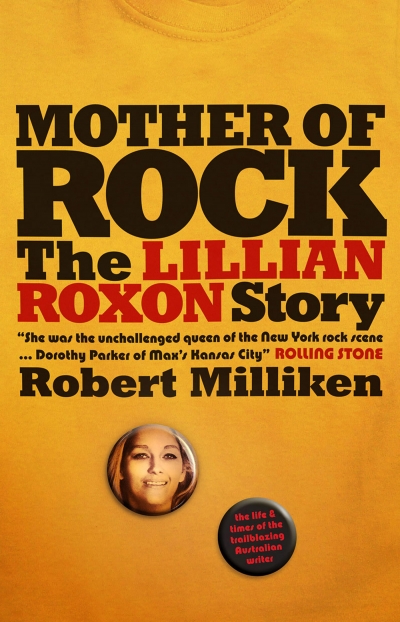