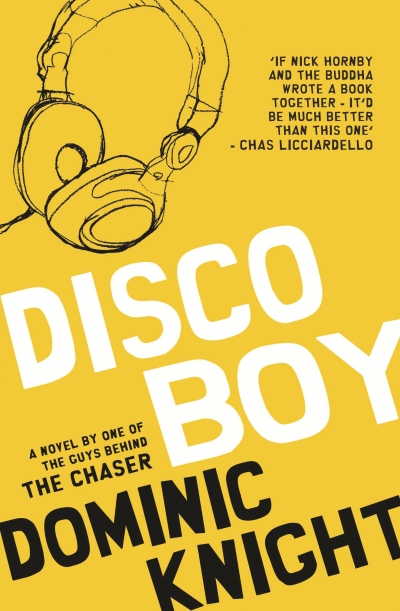 Dominic Knight’s début novel chronicles a life on hold. Its narrator, Paul Johnson, is a twenty-five-year-old law graduate from Sydney University. Single and living off his parents, he detests his job as a mobile DJ, yet also loathes the prospect of working in a legal firm like his friend, Nige, whose life ‘is a corporate T-shirt saying “work hard, play hard”’. Paul’s comic struggles to overcome indecision and inertia shape the narrative, and the inner-city culture of Sydney’s young professionals provide its backdrop.

Knight, a founding member of The Chaser comedy team, acknowledges that his novel may be ‘a thinly veiled whinge about his own life’. As a protagonist, Paul shares much in common with the diffident but questing young men found in the novels of Douglas Coupland, Nick Hornby and Benjamin Kunkel. Like them, Paul is experiencing an extended adolescence and is, to varying degrees, insightful, self-absorbed, humorous, cynical, bored, yearning and afraid. Whether you find this kind of contemporary male character intriguing or tedious will most likely determine your initial response to Disco Boy.

Give Paul time, though. As his work and romantic life become more complicated, Knight allows him to shed his veneer of hip fatigue. ‘I’d spent my life judging men who play games with women,’ he eventually admits, ‘saying I’d never do that, when the truth was that I’d simply never had the opportunity to be that guy.’ Consequently, he becomes more intriguing. Knight is especially attuned to the jokey, meta-conversational ways many young people have of approaching moments of emotional intimacy, as when Paul sleeps with one of his best friends and she remarks, ‘OK, I’m going to go and get dressed, and then we’re going to go and have a nice meal together and totally avoid this whole issue.’ These qualities, and Knight’s sense of pace, will keep you reading Disco Boy.