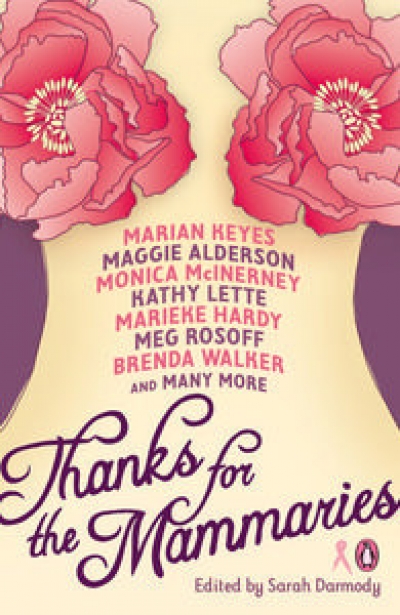 Thanks For The Mammaries

While many journals and anthologies are moving away from themed editions, the theme of this anthology is urgent and worthy. The royalties from Thanks for the Mammaries will go to the National Breast Cancer Foundation (NBCF). Editor and NBCF ambassador Sarah Darmody writes eloquently in both the introduction and her autobiographical piece, ‘Frankenboob’, about her decision to have a prophylactic double mastectomy after discovering that she carried the gene that gave her an eighty-five per cent chance of developing breast cancer.

While the cause may be sombre, most of the stories – written by local and international authors such as Kaz Cooke, Kathy Lette, Marian Keyes, and Monica McInerney – are humorous. Some of the pieces invoke the indignity of having a bra fitting. Maggie Alderson’s ‘Storm in a G-cup’ contrasts the experiences of women in neighbouring fitting rooms, and humorously describes each woman’s dissatisfaction with their own breast size.

Of the twenty-five stories, ten are excerpts from Penguin novels or memoirs. Marian Keyes’s ‘Chicken Fillets and Plus Sizes’ is an extract from her novel This Charming Man (2008), and there is an extract from Sinead Moriarty’s In My Sister’s Shoes (2007), a novel about the relationship between two sisters after one is diagnosed with breast cancer. Jools Oliver writes openly about the joys and frustrations of breastfeeding in an excerpt from her memoir of pregnancy and mothering, Minus Nine to One (2006).

It seems mean-spirited to criticise such a book, but for the most part it fits into the category of ‘chick lit’, with all the accompanying limitations. Too often authors rely on clichés, and the writing can be simplistic and overstated. Of the few literary fiction pieces, the highlight is Brenda Walker’s account of her own experience with breast cancer, ‘The Peonies’, published here for the first time.

Annie Condon is a Melbourne-based writer.

Thanks For The Mammaries

Annie Condon is a Melbourne-based writer.