In David Malouf’s second and perhaps most celebrated novel, An Imaginary Life (1978), of which this new novella is so reminiscent, the Roman poet Ovid is exiled to a primitive village named Tomis. Ovid, ‘called Naso because of the nose’, has been banished due to his unspoken affronts. In Tomis, Ovid, doomed and apart, senses that he must acquire in simplicity a new kind of wisdom:

Must it all be like this from now on? Will I have to learn everything all over again like a child? Discovering the world as a small child does, through the senses … I have smelled my way to the very edge of things, where Nothing begins. That’s where a Nose gets you … I am relegated to the region of silence.

Ever since then, Malouf’s characters, mostly men, often young, have been drawn to ‘the very edge of things’. Not for him the promiscuous alliances or metropolitan mires of an Iris Murdoch or Philip Roth or Alan Hollinghurst. So often, paired or alone, his characters slip away from the centre, ‘relegated to the region of silence’. The effect, in Malouf’s superb prose, is usually transformative. To paraphrase Ovid, these exiles will be separated from themselves and yet be alive.

In Ransom – like An Imaginary Life a kind of extended prose poem – Malouf draws on the closing books of The Iliad, the epic poem in 15,693 lines of hexameter verse, so named by Herodotus. The Trojan War, of something like 1200 BCE, is fast unravelling. In this state of exhaustion and petulant stasis, Achilles – breaker of men, the raging son of Peleus – recalls his first glimpse of Patroclus when they were boys. Homer tells us little of this famous pact; Malouf, likewise succinct, describes the instant attraction. Achilles, ‘spellbound’, meets Patroclus’s gaze. ‘The blow, connects, bone on bone. And the boy, his clear eyes still fixed on Achilles, takes it … They were mated. But darkly, flesh to ghost.’

After this moody, suggestive prelude, war resumes. Patroclus, tormented by Greek disunity and by Achilles’ quarrel with the generals, borrows his helmet and shield and is quickly dispatched by Hector, with none of the teeming slaughterdom of Book 16 of The Iliad. Achilles, enraged and devastated by his loss, avenges his friend and lashes Hector’s handsome corpse to his chariot, dragging his head through the dust, in prose of an eloquence and suppleness that we might have thought extinct:

Faster and faster he drove, up and down the walls of Troy, his hair loose and flying, gouts of sweat flung from his brow, as Hector’s corpse, raw now from head to foot and caked with dust, bounded and tumbled, and Priam, Hector’s father, and his mother Hecuba … and all the common people of Troy, who had flocked to every vantage point on the walls, looked on.

Priam, always terrified of Achilles, ‘that hard, headlong man’ (Robert Fagles), resolves to act, prompted by Iris, Zeus’s messenger. After a vigil of eleven days – ‘like a man under instruction from his daemon or following the contours of a dream’ – Priam decides to extricate his son’s body from Achilles’ court before it can be subjected to more crazed defilements. He will bear the princely ransom that the dying Hector, terrified of being fed to the dogs, implored Achilles to accept (in a passage from Homer not treated by Malouf). Rather like Malouf’s Ovid, ‘[Priam] will get used to the unaccustomed. It is what he is after.’

First, though, Priam must convince his grieving family and court – and Hecuba, mother of nineteen of his fifty sons, many of them killed by the Greeks. His wife remains scornful. In her stern, cheerless authority, she reminds us of Fricka in the great scene with Wotan in Die Walküre. Intransigent, she lectures Priam about his kingly duties and his likely fate at Achilles’ hands. Even in a short book, this scene, with its set speeches, feels overlong, like certain passages of Wagner. Priam broods on the possibilities of ‘chance’ in a world that is ruthlessly deterministic.

As Priam seeks to reassure Hecuba, the general idiom becomes decidedly un-Homeric, too modern to convince:

I feel a kind of freedom … It’s a feeling I like, it appeals to me. And perhaps, because it is unexpected, it may appeal to [Achilles] too: the chance to break free of the obligation of being always the hero, as I am expected always to be the king. To take on the lighter bond of being simply a man. Perhaps that is the real gift I have to bring him. Perhaps that is the ransom.

Eventually, Priam departs and the novella revives. Priam – ‘no staff in his hand, no amulet or armband’ – eschews lordly trappings and insists on travelling in a humble mule-cart. In movement, flux – the centrifugal quest – there is a kind of consolation or self-overcoming. Here we recall Charlie Dowd, the young conscript in ‘War Baby’, one of the stories collected in Every Move You Make (2006): ‘Walking was another form of thinking – or maybe unthinking – in which the body took over, went its own way and the mind went with it.’

Priam’s companion is not the ‘seasoned Idaeus’ of Homer but a stocky carter who picks up work at the market. Somax, an endearing creation of Malouf’s, fond and attentive as Lear’s Clown, humours his beloved mules and protects the desolate king. Somax, spinner of tales, tells Priam about his life. He has lost five children of his own; they have things in common. He shares his griddlecakes with the king and rhapsodises about their creation, how such homely lightness is achieved. Priam, until now almost professionally oblivious to the human and the particular, is entranced by the story of the buttermilk and by Somax’s account of his surviving family. Life, finally, simplifies and humanises him. There is something Prospero-like about his gentle unravelling and relinquishment. He begins to recognise another human being, just as Ovid does in An Imaginary Life when he gains the closest friend he ever had: ‘How strange that I have had to leave my own people to find him. He has taught me to weave a net, and I begin to be good at it.’

On they go, fading king and chatty carter, protected by Hermes, sent by Zeus to guard them (‘escorting men is your greatest joy’: Fagles). Their arrival at the gates of Achilles’ lodge prompts a coup de théâtre, conceived by Malouf. The following scenes between Priam and Hector’s killer are full of dread, caution, and stratagems, but eventually the two leaders reach accord. Achilles, too, with mortal dawnings of his own, is capable of the authentic Maloufian epiphany and transformation:

He knows what this sudden suspension of his hard, manly qualities denotes … This melting in him of will, of self … The particles of which they are composed, within the solid forms, tumble and swarm. As if flow not fixity were their nature. The world swims, and for as long as the mood lasts he too is afloat.

Priam and Achilles attain a kind of intimacy. Once again, Malouf’s characters are purified by contemplation and the company of other men. They part almost tenderly, respectfully. ‘Call on me, Priam,’ says Achilles. The old man, however, cannot resist a premonitory final word. Back he goes to Troy with his son’s corpse, lighter now in many ways. ‘Look, he wants to shout, I am still here, but the I is different … a state of exultant wellbeing in which he too is divinely led as by music.’

The prose is consistently fine. Malouf is incapable of an ugly sentence. The style is so sure, so unostentatious, that we can overlook how good it is, how time and again it does his bidding with quiet aplomb. One long bravura sentence on page forty-five is so dramatic and seamless that the reader hardly notices that it runs to seventeen lines – long for Malouf, who is a master of the succinct and the elliptical.

Malouf states in the afterword that his primary interest in this book is in storytelling per se – ‘why stories are told and why we need to hear them, how stories get changed in the telling’ – but this is storytelling of a swooniness that is very different from the Homeric kind. At times the gulf between Priam’s elegiac pilgrimage and Homer’s existential bloodbaths induces a kind of impatience for the stark, the sinewy, the inflamed, the possessed. Trademark phrases in Ransom such as this of Achilles – ‘His soul not yet settled in him’ – or the notion of his killing Hector ‘man to man, but impersonally’ seem gauzed and gritless, so different from Thoreau’s sense of the epic poet (‘Homer was a greater hero than Ajax or Achilles’) or from Simone Weil’s famous insight: ‘The true hero, the true subject, the centre of the Iliad, is force. Force as man’s instrument, force as man’s master, force before which human flesh shrinks back. The human soul, in this poem, is shown always in its relation to force ...’

At least one critic has acclaimed Ransom as a late masterpiece. Notwithstanding the undoubted pleasures of the prose, other readers may return with something like awe to the incomparable original, with its deific vaults, its terrors – and the astonishing gore. 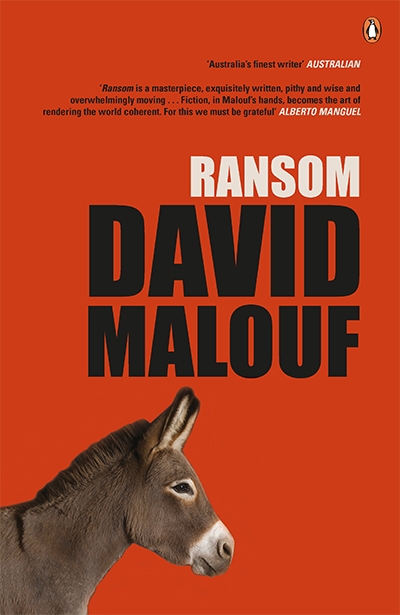