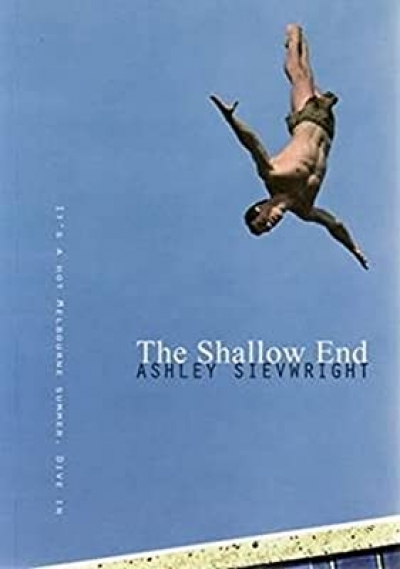 Ashley Sievwright’s The Shallow End, an often entertaining début, casts a wry gaze over a steamy Melbourne summer. Narrated by an unnamed observer, the novel attempts to capture an authentically idiosyncratic gay male voice while traversing a myriad of issues, such as heartbreak, sex, media sensationalism, love, cruising and happiness. Both witty and easy to read, the novel, though largely superficial, is filled with moments of droll sagacity.

Having fled the quagmire of a failed relationship in Barcelona, The Shallow End’s nameless protagonist forlornly returns to Melbourne and begins to wallow the summer away at the Prahran Pool. While filling his hours sunbathing, and enjoying the beautiful gay cohort on display, he becomes intrigued by the enigmatic disappearance of a fellow swimmer, Matt Gray. Increasingly animated by the ensuing media fracas surrounding the questionable particulars of Gray’s personal life, the protagonist launches his own conjecture-driven investigation of the case. As the narrative meanders haphazardly toward the denouement, and as the narrator’s new ‘sugar-pill sex’ lover (who, incidentally, happens to be another swimmer picked up at the Prahran Pool) appears to be linked to the disappearance, the greater mystery – just what went down in Spain – intensifies.

The evocative prose and cynical humour are Sievwright’s strengths; the conjuring of the pool in summer, complete with its eccentric regulars, is testament to this. Similarly, the dry commentary on media hype, and the playful representation of the erotically charged dance of gazes involved in the politics of a hook-up, are impressively rendered. The narrative trajectory, however, is ultimately dissatisfying. The issues at heart of the story – love, loss and the emergence from emotional darkness – frequently take the backseat. Though promising to lead us into deeper water, The Shallow End remains, disappointingly, where its title suggests.

Ken Knight is a Melbourne-based writer.

Ken Knight is a Melbourne-based writer.