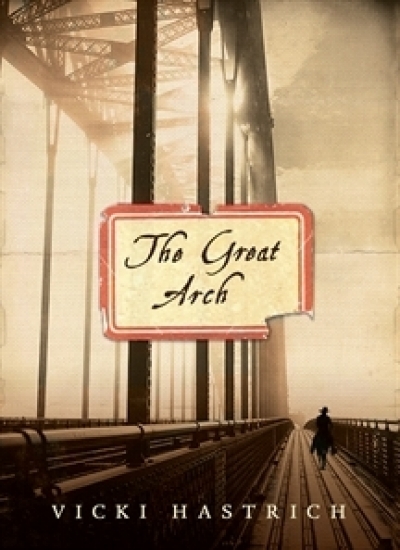 The Great Arch has considerable if unlikely charm. It is a history of the building of the Sydney Harbour Bridge in a novel about real and imagined people living near its construction site. Hastrich brings to life (potentially dry) detail about huge steel plates, creeping cranes, rivets and cables. We see this mostly in the writings and photographs of her central character, an Anglican vicar who records the progress of the bridge-building in his parish paper and also writes a two-volume book about it. The Reverend Ralph Anderson Cage, rector at St Christopher’s at Lavender Bay (based on a real person, Frank Cash), is an endearingly hapless yet decent man who becomes obsessed with the unfolding engineering marvel that reshapes the population and topography of his once-thriving parish.

Other lives are woven through the main text about Ralph, his family, parishioners and neighbours, while the names and cause of death of the sixteen construction workers who died building the bridge are given in contemporary newspaper reports. The harm to the North Sydney community of Lavender Bay is charted as houses are demolished, one by one. Ironically, Ralph attempts to console the diminishing numbers of parishioners by lauding the magnificent technology and progress of the structure which he identifies with God’s great plan. Matching Ralph’s monomania is that of Lennie Gwideer, a character based on the remarkable nine-year-old Lennie Gwyther who rode his horse from Leongatha in Victoria to witness the grand opening in 1932. In the novel, the bridge becomes synonymous with the arrival of modernity in Sydney, traced from the early 1920s to 1967.

Hastrich has given us an absorbing novel and an entrancing social history of inner Sydney, the fading relevance of the church in people’s lives, and the sufferings caused by the Great Depression and World War II. After this, I will never again take the Sydney Harbour Bridge for granted.