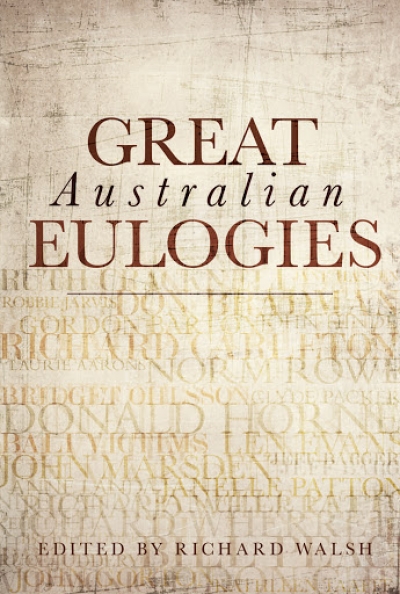 Richard Walsh – former OZ co-editor, A&R, ACP and PBL director – has proven again that he has keen eye for what fixates Australians. To be remembered is of course an enduring human obsession, while the ability to send off (or send up) a friend or family member is more often an afterthought, a stepping into the breach.

Great Australian Eulogies features twenty-eight prominent Australians thrust into roles as diverse as Bob Carr’s commemoration of the Bali victims and Andrew Denton’s cheeky versification of the life of Don Chipp. Fans of Romulus, My Father (1998) are reunited with the eulogy which inspired Raimond Gaita’s best-seller. Cricket doyen Richie Benaud farewells Donald Bradman with gentle aplomb, noting that ‘the changes at the Cathedral End have been many and varied. He’s now got an ageing leg spinner, and I think the Don might have welcomed that.’ At the spiky end of the scale is Tom Hughes’s eulogy for John Gorton, which sensationally served as a platform for settling old political scores.

In his introduction, Walsh stresses the difference between a formal obituary and ‘a great eulogy [which], in my view, is a wonderfully eloquent little dramatic monologue that conjures up the very essence of someone’s spiritual core’. It is quite a task, but the eulogising process is also an opportunity for irreverence and playfulness. The collection also contains eulogies for those still living, a wonderful modern spin on the old gag of ‘a eulogy to die for’. Barry Humphries’ very nearly takes the cake in his eccentric speech for the eccentric Clyde Packer: ‘You left me to cultivate my virtues on my own, but took a true friend’s interest in my vices … Nobody could have corrupted me with such impeccable taste.’

As you read this anthology, be prepared for strange looks on public transport when you laugh out loud at a book with death on its title page but not in its contents.